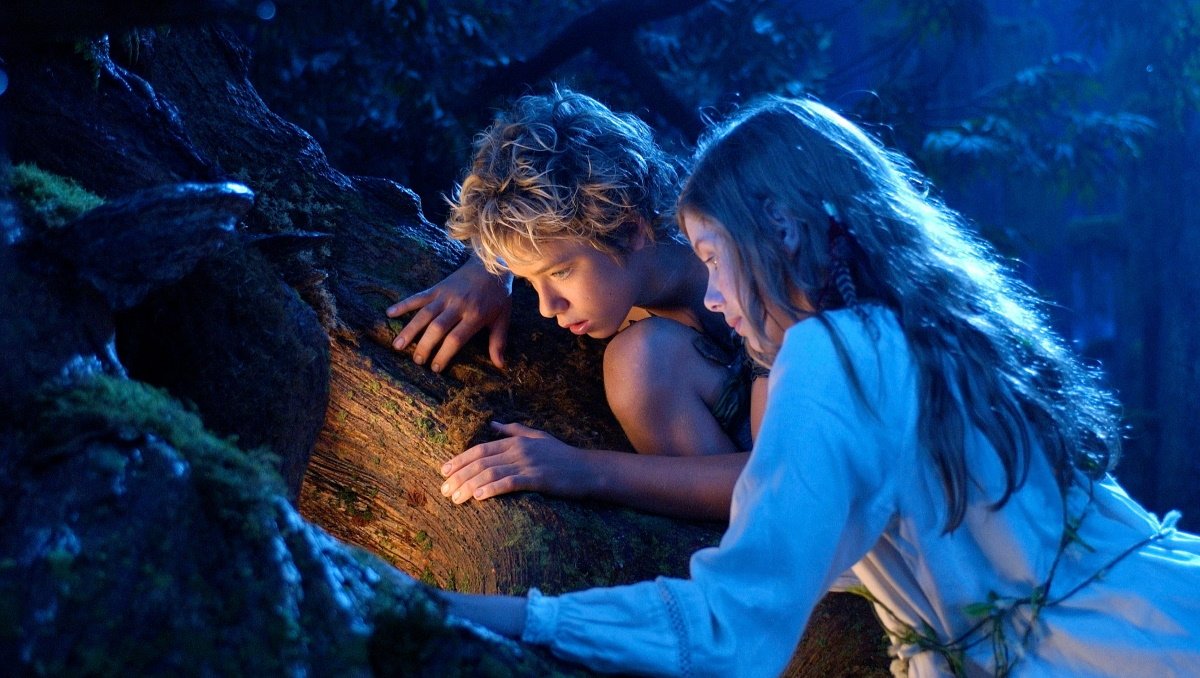 You may feel like you’ve stepped into the pages of a storybook illustrated by Maxfield Parrish when you fly off to Neverland in Peter Pan (2003), P.J. Hogan’s deft and delightful take on the oft-filmed J.M. Barrie classic.

Rachel Hurd-Wood brings a tomboyish spirit to Wendy, a girl on the verge of being a young woman who recoils from growing up. To her rescue comes her storybook creation Peter Pan (a wild-eyed Jeremy Sumpter), who whisks Wendy and her brothers out of their Victorian playroom, up to the stars, and off to Neverland.

The magic of CGI and modern special effects that has so often been used to bring fantasy down to Earth—to make it “real”—has been sprinkled with fairy dust by Hogan to give life to the unreal. The kids alight on cotton candy clouds, soar through a sky painted in pastel hues, and navigate a flying ship around the clock towers and church spires that break through the foggy sea of London. It’s as if they’ve floated into one of Wendy’s stories and transformed the world around them through the mind’s eye of imagination.

The film revels in the child-like delight of make-believe and fantastic adventure but also allows the darker edges of fantasy, from a villainous Captain Hook (a hearty Jason Isaacs) who has a tendency to shoot dead the dissenting voices of his pirate crew to eel-like mermaids with a feral nature.

To my mind Hogan has created both the most compassionate and perceptive interpretation of the tale to date, as well as the most visually splendid. Wendy’s last escape into the magic of her stories, before she says farewell to childhood, is as simultaneously real and unreal as anything in her life. A true delight, it should restore anyone’s faith in fairy tales.

Ludivigne Sagnier pantomimes and chirps with a mischievous streak like a live action Daffy Duck as Tinkerbell and Olivia Williams co-stars as the mother.

Also on Blu-ray and DVD and on SVOD through Amazon Video, iTunes, GooglePlay, Fandango, Vudu and/or other services. Availability may vary by service.
Peter Pan [Blu-ray]
Peter Pan [DVD]

The Blu-ray and DVD editions feature a menu designed for kids to explore. For example, if you “Visit the Darling House” you can see an alternate ending (with Wendy all grown up), deleted scenes, a profile of the Saint Bernard that played Nana, and a featurette about animated Peter’s runaway shadow. Other activities allow you to “Board The Pirate Ship,” where you can view Jason Isaacs’ home video footage from the set, listen to a deleted pirate song, look at the design and construction of the pirate ship, and explore the behind-the-scenes relationships of the pirate crew and the Lost Boys; “Explore the Neverland Forest” and see the featurettes “Tinkerbell: Behind the Fairy Dust” and “I Do Believe in Fairies,” watch the creation of the lush Neverland setting, and get an introduction to actress Carsen Gray, who plays Princess Tiger Lily; “Enter the Black Castle” and experience Flying School training camp, meet the mermaids, and explore the mysterious set; and “Dig Into the Home Under the Ground,” which is highlighted by the featurette “The Legacy of Pan” hosted by Duchess Sarah Ferguson, and includes featurettes on the Lost Boys and their secret forest home and outtakes.