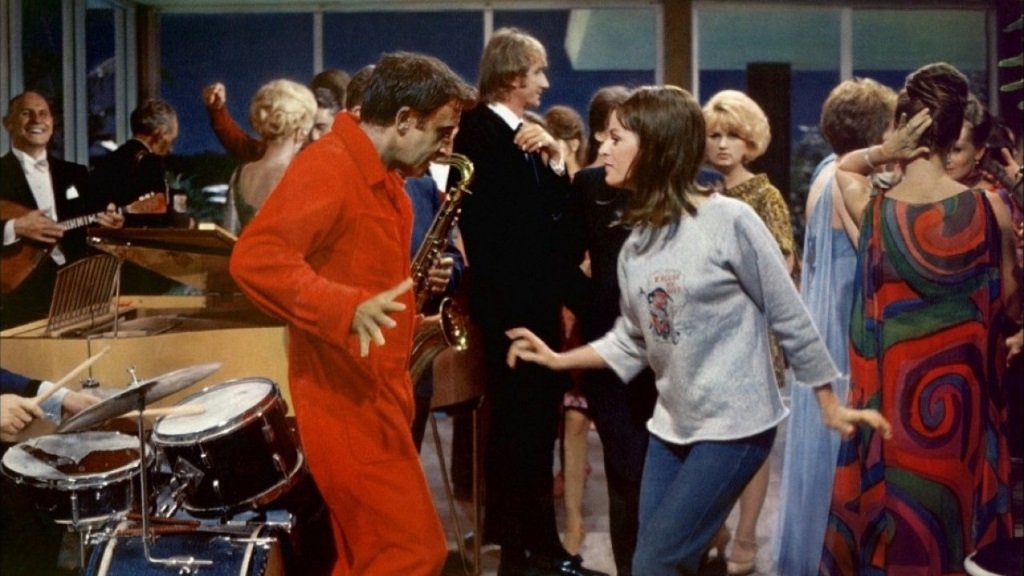 The Party (1968) reunited Blake Edwards and Peter Sellers after a falling out during the second Pink Panther movie for a different kind of comedy: a modern sound version of a silent movie comedy. They don’t pretend it’s a silent film, mind you, but rather build a series of visual gags on a basic premise—Peter Sellers as an accident-prone East Indian actor accidentally invited to dinner party by an A-list Hollywood producer—and then let the comedy bits sequences evolve, build on one another, and guide the story, like a feature version of a Charlie Chaplin short.

It opens with Sellers as Hrundi V. Bakshi, an imported actor wreaking havoc on the set of an American adventure picture (the phony “Son of Gunga Din”), and then watches him slowly bring chaos to a party in a magnificent modern Hollywood home. This place is complete with indoor ponds and an electronic control panel that operates retractable bars and floors throughout the home, like a contemporary version of Keaton’s The Electric House. Though Edwards started with a script, he largely gave the film over to improvisation, developing gags into sequences and letting them escalate and evolve with a skewed kind of logic.

This is an era when Caucasians still routinely played ethnic roles but despite the “brownface” make-up and accent, Sellers is less an ethnic caricature than a benevolent, well-meaning outsider to American culture in general and the Hollywood business world specifically. Almost upstaging Sellers is Steve Franken as a waiter who keeps knocking back the drinks he’s supposed to be passing out guests and ends up stumbling through the party in a drunken daze. Claudine Longet co-stars as a sweet-natured young actress who sings a song at the party and connects with Sellers and Gavin McLeod stands out as a crude Hollywood producer.

This isn’t as fall-down-funny as the best Pink Panther movies but it has a kind of purity and comic grace to it all, like an elaborately choreographed dance of physical comedy, and Edwards executes it with colorful design and sets it to superb Henri Mancini music. It’s the closest American answer to a Jacques Tati film I’ve seen.

Streaming free on Kanopy, which is available through most public and college library systems.

, iTunes, GooglePlay and/or other services. Availability may vary by service.
The Party [Blu-ray]

The Kino Lorber Blu-ray and DVD releases are mastered from an excellent new HD transfer. The film has dynamic set design and a bright color scheme and the colors pop in this edition. Both discs carry over the featurettes and interviews from the earlier 2004 DVD release. The 24-minute “Inside The Party” covers the inspiration and production of the film and the 16-minute “The Party Revolution” looks as the pioneering video playback technology that Edwards used for the film and both feature interviews with Edwards, producer Walter Mirisch, associate producer and actor Ken Wales (who are also interviewed in separate profile pieces), and some of the supporting actors.