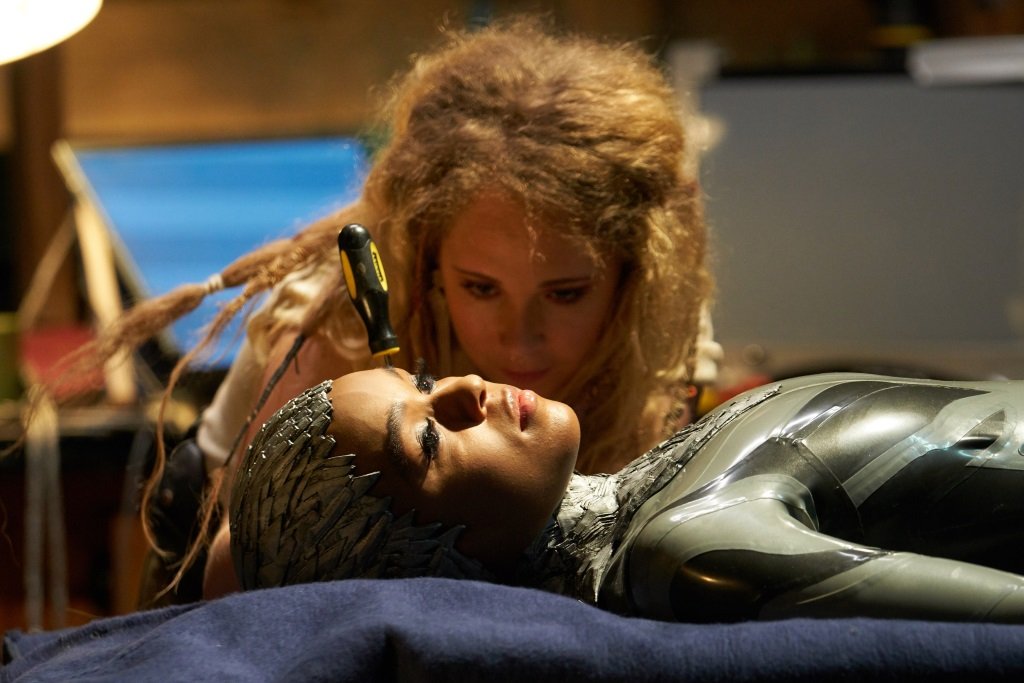 Dick’s novels and stories have been turned into numerous films, from Blade Runner to Total Recall to Minority Report, often with his unconventional stories completely rewritten for the screen. In this series, different directors and screenwriters take on the short stories of the influential and conceptually creative author. Among the screenwriters are Ronald D. Moore (Battlestar Galactica) and Tony Grisoni (the Red Riding trilogy) and the directors include Dee Rees (Mudbound), Alan Taylor (Game of Thrones and The Sopranos), and Michael Dinner (Justified).

“It boasts strong actors and a creative generosity that enables different directors and writers… to steer the ships of their respective adaptations,” observes Jen Chaney for Vulture. “While, overall, it is not as consistently compelling as Black Mirror, Electric Dreams is a worthy addition to a genre—the anthology series—that is in the midst of a renaissance.”

My Next Guest Needs No Introduction with David Letterman marks the late night legend’s return to the small screen in a monthly talk show that focuses on a single guest each episode. Barack Obama is his first guest. New episodes debut each month on Netflix.

Jack Black is The Polka King (2017, not rated), a bandleader who creates a Ponzi scheme to further his career, in the Netflix original comedy. Netflix also has The Man Who Would Be Polka King (2009, not rated), the documentary that inspired the film.

A Ghost Story (2017, R) is not a horror film but an intimate drama of loss and grief. Casey Affleck and Rooney Mara star in the odd but touching drama with the most unconventional special effect of the year: the ghost is an actor under a simple bedsheet with cut-out eyeholes. It is curiously effective and sneakily haunting. Now streaming for Amazon Prime members.

Hulu has all six seasons and 121 episodes of Lost, the dense, richly-woven conspiracy drama / metaphysical mystery that became a mainstream hit with a cult following and still holds a spell over its fans. This show, from creators J.J. Abrams and Damon Lindeloff, almost demands repeat viewings to explore the mysteries. Reviewed on Stream On Demand here.

IT (2017, R), based on the Stephen King novel, is the sleeper hit of the year: an R-rated horror film about a group of children haunted and hunted by a demonic clown (Bill Skarsgard). Also on DVD and Blu-ray.

Jackie Chan takes a rare dramatic role in the thriller The Foreigner (2017, R) as a widower who loses his daughter to a terrorist bombing in London and puts his unique set of skills (he was trained as a special ops soldier by the American military before emigrating to England) to work pressuring a former IRA officer (Pierce Brosnan) to giving up the bombers. Also on DVD and Blu-ray and at Redbox.

Two dramas based on true stories: Chadwick Boseman plays young Thurgood Marshall in Marshall (2017, PG-13) from filmmaker Reginald Hudlin and Liam Neeson is Mark Felt: The Man Who Brought Down the White House (2017, PG-13). Also on DVD and Blu-ray and at Redbox.

True stories: Human Flow (2017, PG-13), a documentary about forced migration around the world from artist Ai Weiwei, is on the shortlist for the Academy Award. Also new:

Claire Holt and Mandy Moore are divers stranded in a shark cage at the bottom of the sea in the thriller 47 Meters Down (2017, PG-13) (also known as In the Deep) and Vera Farmiga and Patrick Wilson play paranormal investigators in the horror film The Conjuring (2013, R).

Kid stuff: the animated Captain Underpants: The First Epic Movie (2017, PG) based on the whimsical children’s books by Dav Pilkey.

True stories: The Untold Tales of Armistead Maupin (2017, not rated) profiles the “Tales of the City” author.

Streaming TV: Tennison, the prequel to Prime Suspect, stars Stefanie Martini as young Jane Tennison in her first days on the police force in 1973 England. Also new is Grimm: Season 6, the final season of the colorful supernatural series set and shot in Portland, Oregon.

Shirley Valentine (1989, R) earned actress Pauline Collins Oscar and Golden Globe nominations for her performance as a British housewife who runs off to Greece (Amazon Prime and Hulu).

You won’t recognize Michael Fassbender in the oddball comedy Frank (2014, R) because he wears a giant paper maché mask throughout the entire film.

True stories: Julian Schnabel: A Private Portrait (2017, not rated) looks at the life and career of the New York artist and filmmaker.

The new documentary David Bowie: The Last Five Years (2018, TV14) chronicles the rock legend’s return to recording after years retirement in the final years before his untimely death.

Amandla Stenberg and Nick Robinson are star-crossed teenagers in love in Everything, Everything (2017, PG-13), the romantic drama based on the young adult novel by Nicola Yoon.

Arriving Saturday night is an extended version of the high-octane The Fate of the Furious (2017, not rated), the eighth film in the car caper franchise with Vin Diesel and Dwayne Johnson, featuring footage not seen in theaters.

Liev Schreiber is Chuck (2017, R) in a drama based on the story of the real-life underdog boxer who inspired “Rocky.”

FilmStruck’s director of the week is the polarizing Lars von Trier and they’ve added eight of his films to the catalog, from his breakthrough murder mystery The Element of Crime (Denmark, 1984, not rated) to his Oscar nominated Breaking the Waves (Denmark, 1996, R) with Emily Watson to the dark psychodrama Antichrist (Denmark, 2009, R) with Willem Dafoe and Charlotte Gainsbourg.

New to the Criterion Channel is Lukas Moodysson’s Together (Sweden, 2000), set in a 1970s commune, and The Complete Mr. Arkadin (1955), featuring three different versions of the labyrinthine thriller directed by Orson Welles plus bonus radio plays and other supplements.

The 1998 British cop drama Supply & Demand features Miriam Margolyes as the head of a special undercover unit and Eamonn Walker as a streetwise detective. Acorn presents the U.S. debut of the show created by Lynda La Plante.