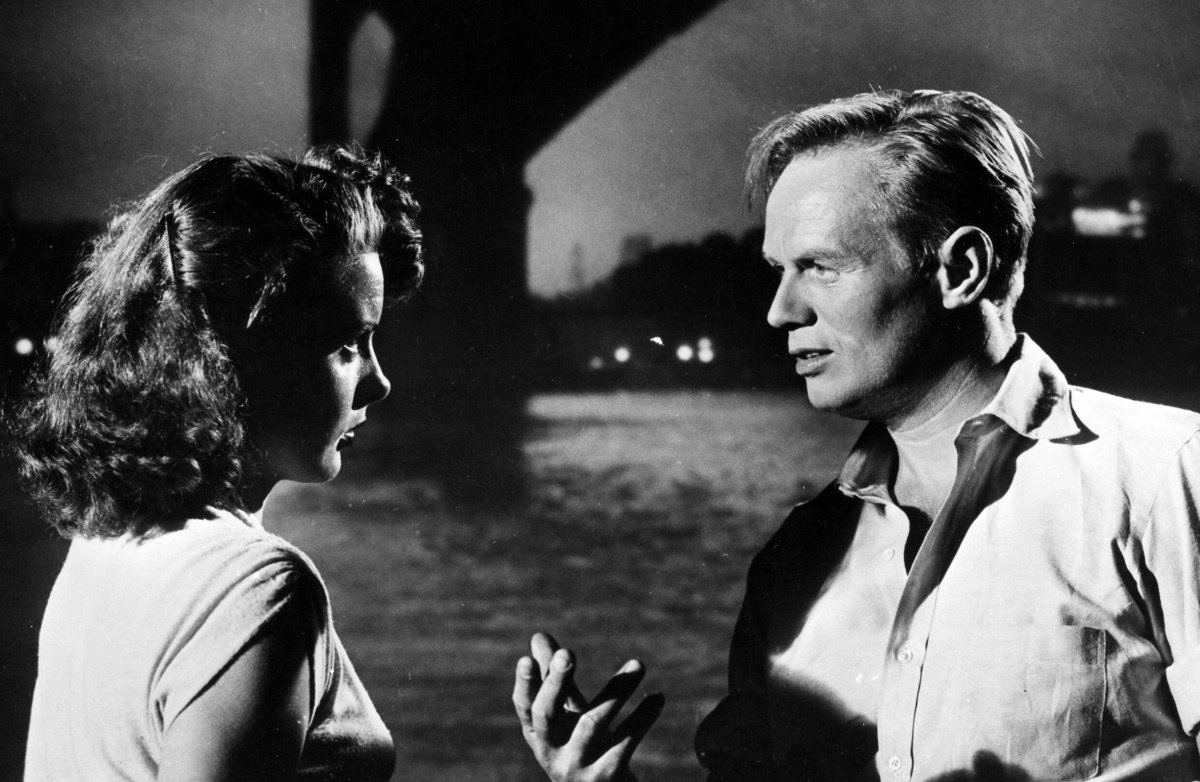 Samuel Fuller, former journalist, pulp writer and soldier, made tough guy films with mad passion and driving energy: he was America’s kino-fist with a tabloid sensibility. Pickup on South Street (1953) is arguably his most accessible film and easily one of his most entertaining and engaging.

Richard Widmark gives his most feral performance as Skip McCoy, a stray dog of a loose “cannon” who picks pockets on the New York Subway. This three time loser inadvertently lifts state secrets on microfilm being delivered to Communist spies by the beautiful but not-too-bright Candy (Jean Peters) as a favor to her former boyfriend. With everyone trying to get it back and patriotism holding no truck with this apolitical street survivor, he decides to sell to the highest bidder.

For all the political wrapping, this is a story of loners and social drop-outs working within their own very personal codes, notably Candy, whose loyalty and hide-hardened compassion make her a tarnished angel in this underworld, and maternal informer Moe Williams (Thelma Ritter in an Oscar-nominated performance). Her goal in life is to sock away enough money for a fancy funeral; “If I was to be buried in Potter’s Field, it would just about kill me,” she remarks, one the film’s many great lines.

This is one of the maverick auteur’s studio films and it’s a magnificent marriage of Hollywood studio filmmaking and Fuller’s jagged, edgy style and maverick sensibility. He directs with thrumming energy, enriched by glorious pulp dialogue (“You’d be doing me a favor if you blew my head off,” “Are you wavin’ the flag at me?”), and punched up with the unmistakably visceral physicality of Fuller’s onscreen action. His passion comes through every jagged, explosive frame of this classic.

Murvyn Vye co-stars as the hard-case cop with a grudge against Widmark, Richard Kiley is the weaselly, sweaty coward of a double agent, and Milburn Stone is the federal detective on the trail of spies. Dwight Taylor gets story credit and Joseph MacDonald provide the sharp, stylish cinematography.

Sam Fuller won the Bronze Lion at the Venice Film Festival and the film was added to the National Film Registry in 2018.

Criterion Collection released a 4K digital restoration on Blu-ray and DVD in 2021. Both editions feature a 35-minute video interview with Imogen Sara Smith offering analysis and production background, an interview with Sam Fuller from 2004 and (conducted by Richard Schickel) about the shooting of Pickup (“You can shoot anything with a camera,” he proclaims. “[The director] has to have a feel of visual emotion.”), and an 11-minute excerpt from the French television show Cinema Cinemas: Fuller (1982) with Fuller on the moviola revisiting the film. Both segments feature Fuller at his garrulous best, full of stories, revelations, insights, and cigar-chomping commentary. Also features a 1954 radio adaptation with Thelma Ritter reprising her role and a booklet.