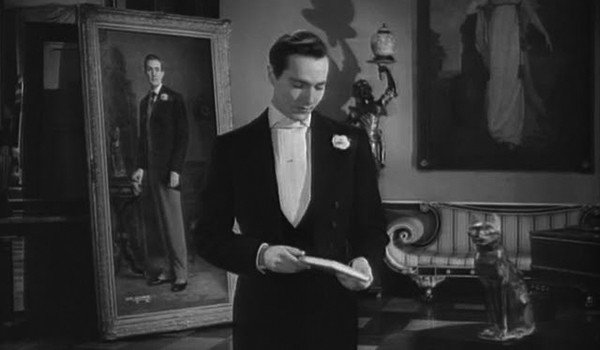 Made for MGM in 1945, the handsome and elegant The Picture of Dorian Gray (1945) is still the best adaptation of Oscar Wilde’s only novel.

Hurd Hatfield plays Dorian Gray, a handsome, earnest young man who stops aging after having his portrait painted, and George Sanders is Lord Henry Wotton, the hedonistic cynic who tempts the moral Dorian to indulge in all the pleasures of the world. As Dorian becomes corrupted and cruel, the portrait begins to change, manifesting his sins in visual form.

The film, scripted and directed by Albert Lewin, leaves the debauchery off screen and only hints at the depths of bad behavior of the eternally young Dorian but otherwise is faithful to the story, the themes, and the language. Hatfield is an inexpressive actor but an effective image of hollow beauty and the rest of the cast is strong. Sanders delivers Wilde’s sarcastic aphorisms with a cultured purr, Angela Lansbury is the beautiful young music hall singer who Dorian drives to suicide and Donna Reed is the adoring innocent and idealist who Dorian is afraid of destroying through his vice.

The black and white film is handsomely mounted (it won an Academy Award for Harry Stradling’s cinematography) and Lewin uses a striking cinematic device to great effect: the film briefly cuts to full color when the new portrait is first unveiled and when the aged, diseased image of Dorian is revealed after his descent into depravity. It’s a visual shock and it enhances to horror of the grotesque mutation of the painting. This is an intelligent adaptation that is respectful of the novel (even when it changes details) and a compelling film on its own terms.

Not rated, in black and white with color inserts.

, iTunes, GooglePlay and/or other services. Availability may vary by service.
The Picture of Dorian Gray [Blu-ray]

The Picture of Dorian Gray [DVD]

On DVD from Warner Bros. Home Video and Blu-ray from Warner Archive. The Blu-ray features the color sequences and includes commentary and bonus short films from 1945.