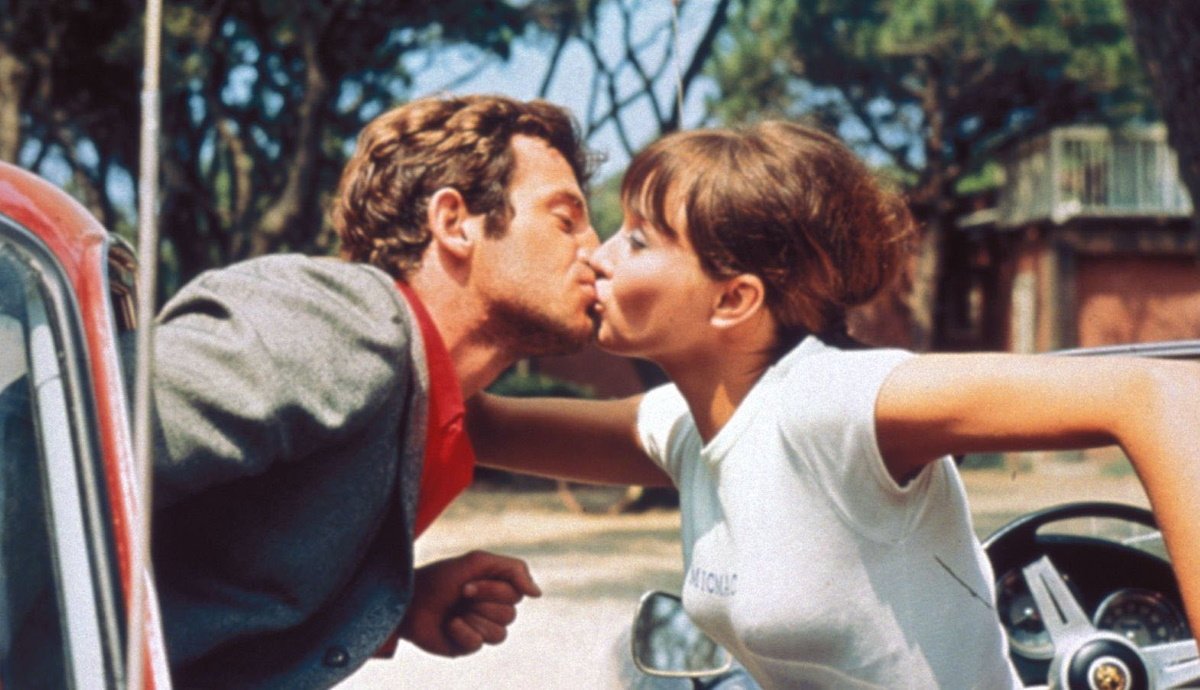 Jean-Luc Godard’s Pierrot le fou (France, 1965) is a road movie, a crime fantasy, a cultural satire, a tale of consumerist alienation and bourgeois apathy, and a femme fatale noir in Technicolor and CinemaScope, shot in the bright sunlit canvas of broad daylight. Jean-Paul Belmondo (star of Breathless), plays Ferdinand, a former teacher pushed into an advertising career by a wealthy wife with high-society values.

Oppressed by the banality of his existence, the alienated intellectual Ferdinand flees an empty bourgeois cocktail party and runs off with the family babysitter Marianne (Anna Karina, Godard’s one-time muse and wife), who gives him the nickname Pierrot. Their flight is also motivated in part by the dead body in Marianne’s apartment and armed men on her trail. Thus they begin a flaky, at times slapstick crime wave of petty thefts, interrupted by an extended second act diversion in a seaside Eden.

Looking back from the present, Pierrot le Fou plays like Godard’s formal farewell to his past films, a last play with his old toys before putting them into storage and moving on to more serious concerns. He liberally references his favorite films and filmmakers (from Hitchcock to Nicholas Ray’s Johnny Guitar) and he has American director Samuel Fuller deliver the film’s most famous line: “Film is like a battleground. Love, hate, action, violence, death. In a word, emotion.”

It’s also a portrait of a failing relationship. Karina’s divorce from Godard became final before the shoot was over and at the time critics saw it as the story of an artist destroyed by a (double-crossing) woman and a reflection of the director’s painful private life. But the reflection is hardly flattering to the so-called artist in the equation. Ferdinand is a complacent intellectual snob to the restless emotional youth of Marianne, the establishment to her rebellion.

It’s also his farewell to Karina, and perhaps his way of working out why they simply don’t belong together. For all the murder and betrayal and revenge in the plot, there’s no emotion attached. They’re just going through the motions of a formal declaration of the end of a love affair, as defined by the cinematic conventions of the genre.

For more, read an in-depth review at Turner Classic Movies.

Criterion Collection disc features commentary by former Godard collaborator Jean-Pierre Gorin on select scenes in the 36-minute A Pierrot Primer, which plays like an audio essay with a visual track and Gorin’s finger on the pause button. Also features the 53-minute docu-essay Godard, L’amour, la Poesie from Luc Lagier, a 15-minute interview with Anna Karina (in English), where she generously discusses her life and films with Godard, a nine-minute excerpt from a 1965 French TV program, four minutes of filmed interviews with Godard and Karina at the 1965 Venice Film Festival, the trailer, and a 48-page booklet with new and archival essays and a print interview with Godard from 1965.