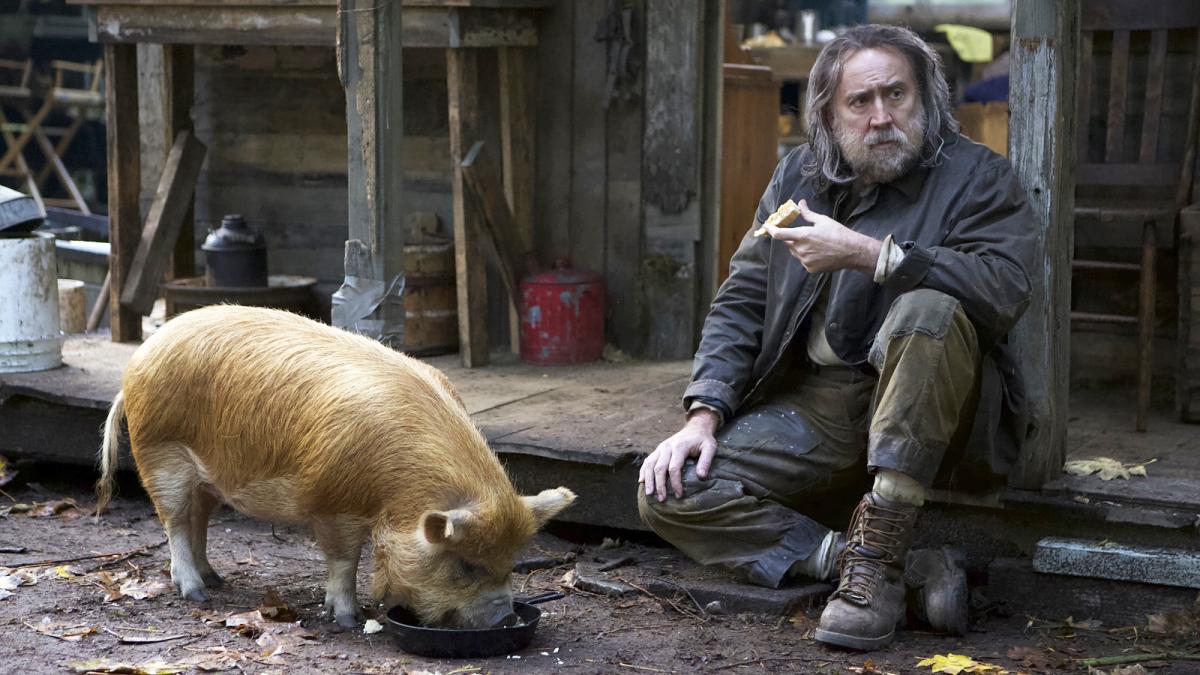 In the years since he dropped out of the Hollywood blockbuster scene and devoted himself to independent cinema and small productions, Nicolas Cage developed a reputation for big, eccentric, often flamboyant performances, what you might call maximalist acting.

In Pig (2021), Cage gives a quiet, intimate, intensely restrained performance, a minimalist approach to an emotionally checked out character who is roused from his isolation and forced to face the world once again.

The premise might sound like a low-budget John Wick movie—Rob (Cage), a hermit living off the grid in the forest outside of Portland, Oregon, goes on an odyssey to rescue his kidnapped truffle-hunting pig—but the story Rob on a different kind of confrontation. Hitting road with Amir (Alex Wolff), the flashy restaurant supplier who buys his truffles and delivers his groceries, he ends up in the Portland restaurant culture with a detour to a strange, surreal underground scene of chefs and servers.

But it’s also about Rob revisiting the past he tried to escape, not just the people but his life as a high-end chef. “I remember every dish I made,” he muses at one point, “I remember every person I served.” The loss of his porcine companion dredges up even more profound emotions and the journey forces him to finally confront his untreated personal wounds.

It’s a beautiful performance, sadly (if unsurprisingly) ignored by the Oscars and even the Film Independent Spirit Awards but championed by many critics groups in their end-of-the-year awards. He brings a grace to his scenes in the kitchen, showing us a man whose respect for the raw materials of his dishes borders on spiritual and whose ease with the tools of the trade reveals a mastery born of experience. There is so much grace beneath his restraint.

It’s a lovely debut for director Michael Sarnoski, who shot the film on location in and around Portland, Oregon, and it won the Film Independent Spirit Award for best first screenplay (shared with cowriter Vanessa Block). Cassandra Violet and Adam Arkin costar.

Add to My Stuff on Hulu or stream free on Kanopy, which is available through most public and college library systems.

Also on Blu-ray and DVD and on SVOD through Amazon Video, iTunes, GooglePlay, Vudu and/or other services. Availability may vary by service.
Pig [Blu-ray]
Pig [DVD]