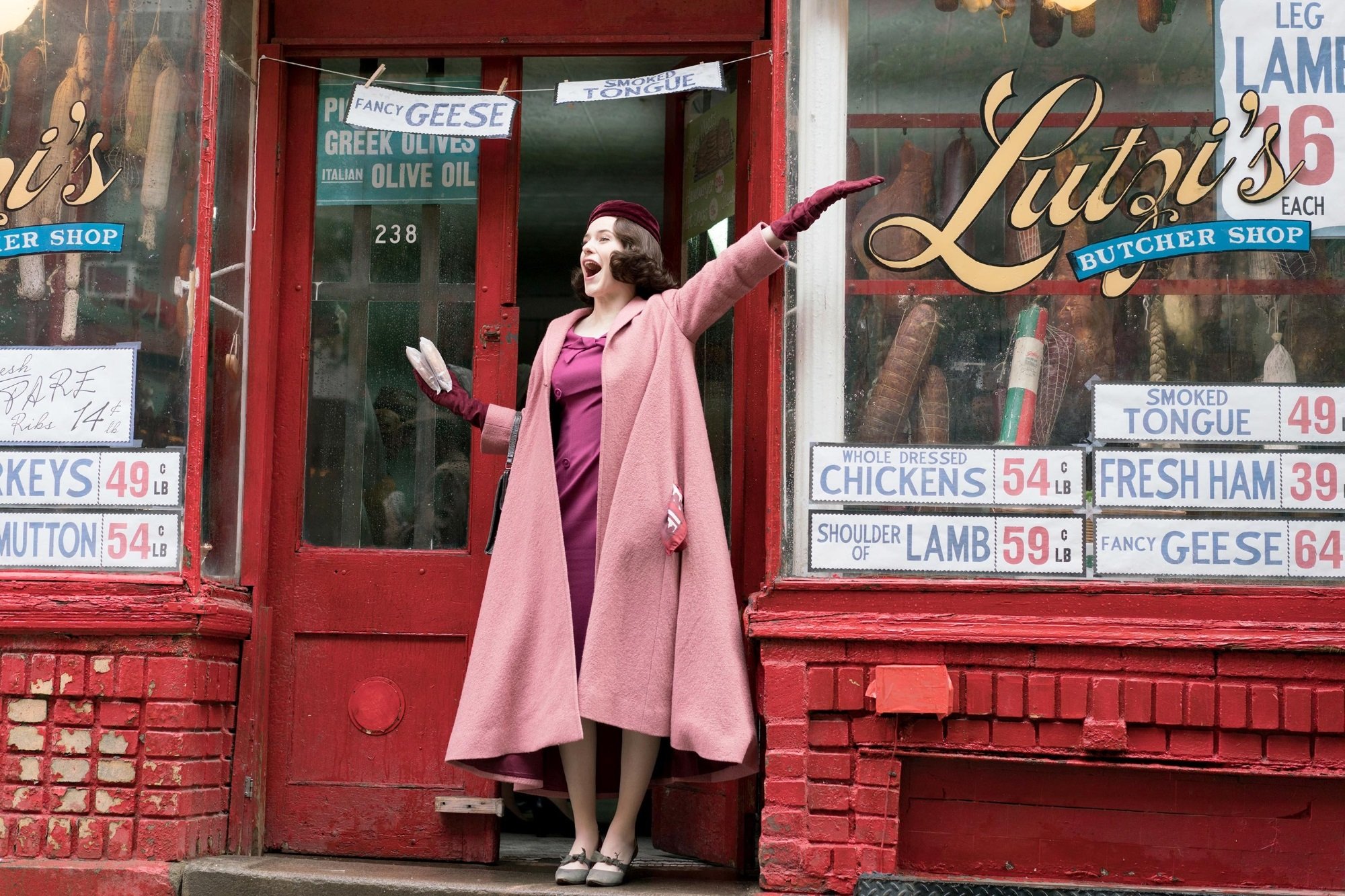 Pilot Season is back on Amazon Prime, which means viewers can watch and vote on five shows under consideration for futures Amazon Prime series. And remember, you don’t have to be a member to watch the pilots. You can treat it as a free sample.

The most promising is The Marvelous Mrs. Maisel from Amy Sherman-Palladino (creator of Gilmore Girls), with Rachel Brosnahan as a devoted housewife in the Upper West Side who, after supporting her husband’s amateur comedy fling in the Village, tries her hand in the stand-up comedy culture of the late 1950s.

Sing presents a cast of animated animals singing their hearts out with the voices of Reese Witherspoon, Scarlett Johansson, Seth MacFarlane, Taron Egerton, and Tori Kelly. Matthew McConaughey is your impresario and master of ceremonies for this jukebox musical and Jennifer Hudson and Jennifer Saunders co-star (PG).

Jessica Chastain is Miss Sloane, a high-powered lobbyist who takes on the gun lobby in this drama of cold-blooded politics and morality for sale. Gugu Mbatha-Raw, John Lithgow, and Mark Strong co-star (R).

Available same day as select theaters nationwide is the comedy All Nighter with J.K. Simmons as a father who teams up with his daughter’s ex-boyfriend (Emile Hirsch) to find his missing daughter (R). Also new: the science fiction thriller Bokeh with Maika Monroe and Matt O’Leary and horror film From a House on Willow Street (not rated).

Melissa Leo is The Most Hated Woman in America: Madalyn Murray O’Hair, the founder and president of “American Atheists” who took her fight against religion in schools to the Supreme Court, in the Netflix exclusive feature that premiered earlier this year at SXSW. “[I]t’s hard to believe that The Most Hated Woman is the first movie that’s been made about the Murray family’s remarkable lives or their outsized impact on our sociopolitical landscape,” writes IndieWire critic David Ehrlich. “By that same token, however, it’s even harder to believe that the first such movie could be this spectacularly inert and uninteresting — seldom has a biopic done so little with so much.” Juno Temple, Vincent Kartheiser, and Josh Lucas co-star (not rated).

Train to Busan (South Korea, 2016) is a terrific zombie thriller with its heart on its sleeve along with the obligatory blood and guts (not rated, with subtitles). Reviewed in Stream On Demand here.

True stories: the Oscar nominated documentary Fire at Sea (Italy, 2016) looks at the front lines of the refugee crisis on the Mediterranean from the Italian island of Lampedusa, where the local coast guards rescues thousands from migrants from failing boats (not rated, with subtitles). Also from Italian documentary filmmaker Gianfranco Rosi is his award-winning Sacro GRE (Italy, 2013).

Streaming TV: frenemies Jane Fonda and Lily Tomlin are back in Netflix’s Grace and Frankie: Season 3. Also new: How to Get Away with Murder: Season 3 with Viola Davis and The Vampire Diaries: Season 8, the final season of the CW show, available days after concluding its network run.

William Shatner spoofs his own persona in Free Enterprise (1999), a romantic comedy set in the depths of sci-fi fandom (R).

And there’s more rockumentary this week: New York Doll (2005) about early punk pioneer Arthur “Killer” Kane (PG-13) and The Glamour and the Squalor (2015) about the influential deejay Marco Collins (not rated).