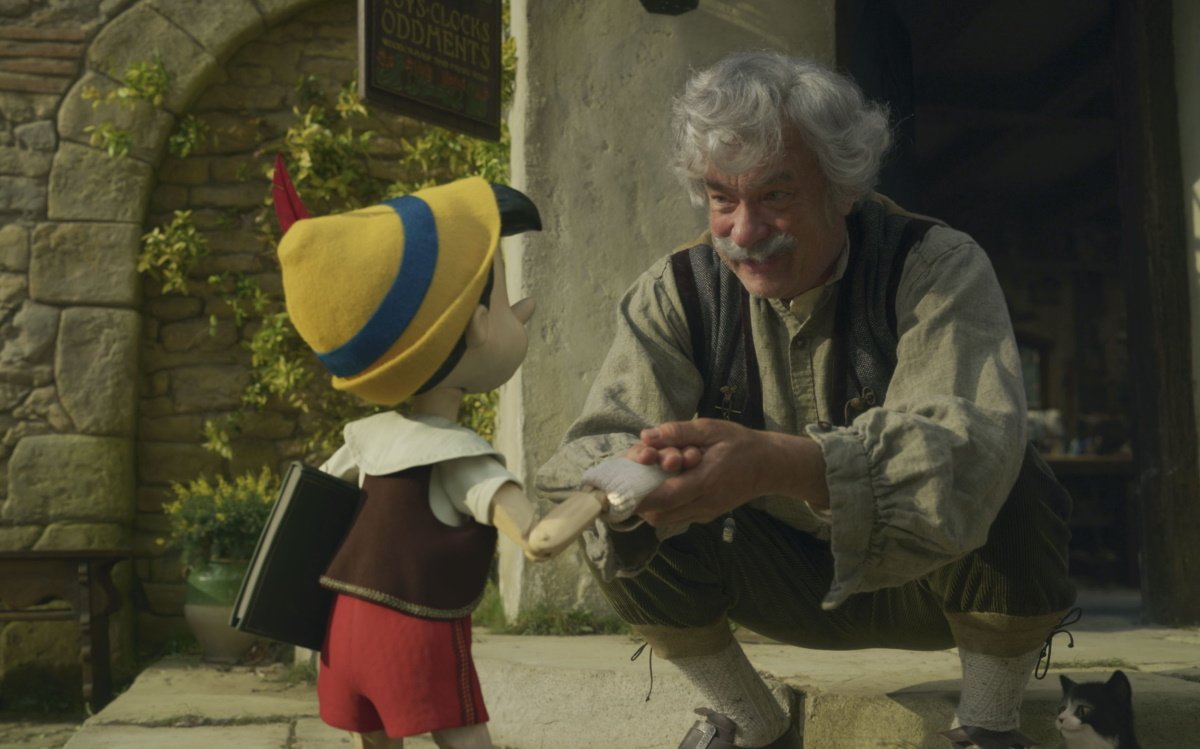 Tom Hanks plays Geppetto, the lonely woodcarver who builds a wooden boy, in Robert Zemeckis’ live action version of “Pinocchio” (2022, PG). Benjamin Evan Ainsworth voices the living puppet (a CGI creation modeled directly on Disney’s classic animated film), Cynthia Erivo is the Blue Fairy who brings him to life, and Joseph Gordon-Levitt is Jiminy Cricket, his guide and conscience, on the journey to becoming a real boy. The feature film fantasy, which is getting high marks for performance but less love for the screenplay, debuts directly to Disney+.

“Thor: Love and Thunder” (2022, PG-13), the second Thor movie directed by Taika Waititi, finds the Norse god turned Earth superhero (Chris Hemsworth) battling villain with the alarming name Gorr the God Butcher (Christian Bale). Waititi brought a playful humor to the “Thor” films and doubles down on the comedy in this fizzy entry in the MCU, which brings in the Guardians of the Galaxy and brings back Valkyrie (Tessa Thompson), Sif (Jaimie Alexander), and Jane Foster (Natalie Portman), now a superpowered hero in her own right. (Disney+)

The conspiracy thriller “Last Light” (not rated) stars Matthew Fox as a petro-chemist who discovers the global oil is contaminated and races to solve the mystery as blackouts and gas shortages send the world teetering on the edge of collapse. Joanne Froggatt costars in the globe-trotting limited series, based on the novel by Alex Scarrow. All episodes streaming. (Peacock)

International pick: A lonely little girl dealing with the death of her grandmother meets a friend in the woods who may just be her mother as young child in Céline Sciamma’s “Petite Maman” (2021, France, PG, with subtitles). This sweet, gentle film explores grief, anxiety, and fear of abandonment with a delicate touch and a sense of innocence and healing. It’s lovely. (Hulu)

Classic pick: It’s cocktail hour on the mystery beat in “The Thin Man” (1934), the snappy murder mystery starring William Powell and Myrna Loy as Nick and Nora Charles, Hollywood’s most debonair detective team. It streams along with “After the Thin Man” (1936), costarring a very young James Stewart as a fresh-faced murder suspect, and three additional sequels on HBO Max.

Ethan Hawke and Mason Thames star in “The Black Phone” (2022, R), a horror film based on a story by Joe Hill. Also streams on Peacock.

A cross-country trip takes a deadly turn when a family witnesses a murder and is chased by a mysterious killer in “End of the Road” (2022, R), a thriller starring Queen Latifah, Ludacris, and Beau Bridges.

International passport: the romantic drama “No Limit“ (France, 2022, TV-MA, with subtitles) follows a young woman (Camille Rowe) who takes up free diving and falls into a destructive relationship with her instructor.

International TV: the Scandinavian noir “Entrapped“ (Iceland, 2022, TV-MA, with subtitles), released elsewhere as the third season of “Trapped,” sends two detectives into the murder of a cult member. Also new:

Romantic comedy and crime thriller collide in “Wedding Season: Season 1“ (not rated) with Rose Salazar as a bride who goes on the run with her old boyfriend (Gavin Drea) after the groom and her family are killed on her wedding day.

The limited series “Tell Me Lies“ (2022, TV-MA) is a dark romantic drama that explores the passionate but destructive relationship between a couple (Grace Van Patten and Jackson White) over eight years.

“Grid: Season 1“ (South Korea, not rated, with subtitles) is a science fiction thriller set in a future where the Earth is threatened by solar winds.

“Cars on the Road: Season 1“ (TV-G), a small screen spinoff of the animated movies, features the voices of Owen Wilson and Larry the Cable Guy.

True stories: “Epic Adventures with Bertie Gregory: Season 1“ (TV-PG) takes viewers to some of the harshest environments on our planet to photograph stories of real-life animals and “Growing Up: Season 1“ (TV-PG) combines narrative, experimental, and documentary filmmaking to tell ten real-life coming of age stories.

Valerie Lemercier writes, directs, and stars as a young French-Canadian woman who becomes pop music superstar in “Aline“ (2022, PG-13, with subtitles), a musical fantasy inspired by the life of Celine Dion.

The sixth and final season of the witty legal drama “The Good Fight: Season 6“ (TV-MA) launches with new episodes on Thursdays.

“The 101 Scariest Horror Movie Moments of All Time“ (not rated) is an eight-episode series from the producers of “Eli Roth’s History of Horror.” New episodes on Mondays. (AMC+ and Shudder)

Jon Bernthal takes on the role created by Richard Gere in “American Gigolo: Season 1“ (TV-14), a mix of remake and sequel to the iconic movie costarring Gretchen Mol and Rosie O’Donnell. It was developed by David Hollander, showrunner of “Ray Donovan.”

“British New Wave” presents 17 features from a redefining decade of British moviemaking, from Jack Clayton’s Oscar-winning “Room at the Top“ (1959) with Laurence Harvey and Tony Richardson’s angry young man classic “Look Back in Anger“ (1959) with Richard Burton to Lindsay Anderson’s rebellious “If…“ (1969) with Malcolm Macdowell and Ken Loach’s “Kes“ (1970), which has been embraced as one of the greatest films in British cinema history.