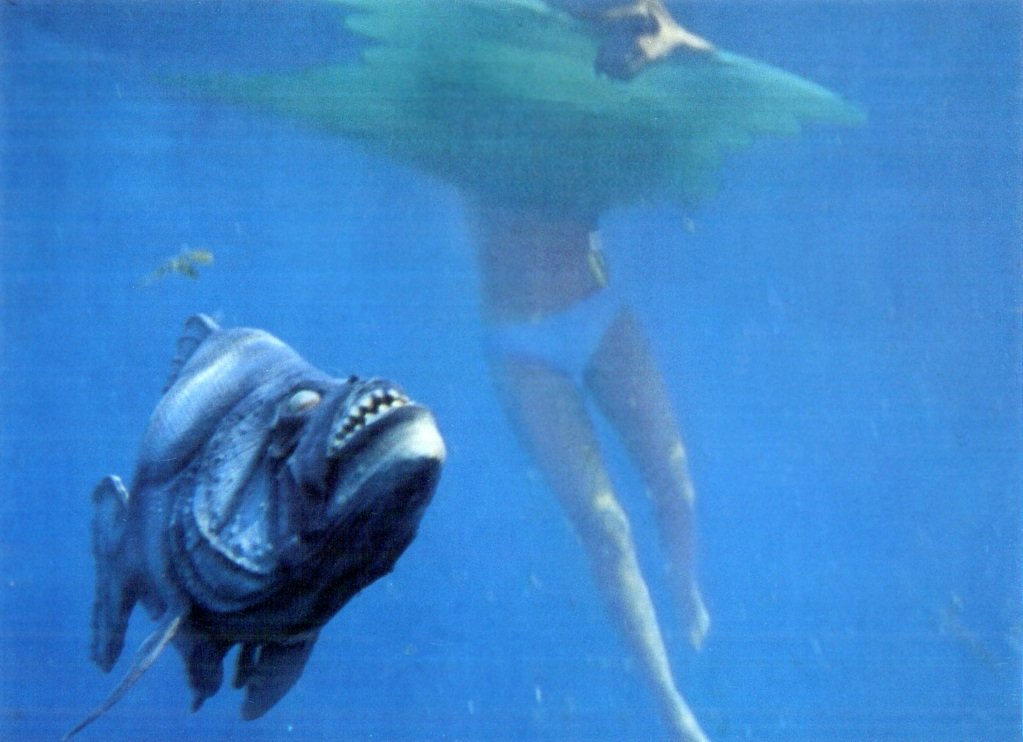 Piranha (1978), produced by Roger Corman at the height of the “nature gone wild” boom of American cinema, strikes B-movie gold.

Bradford Dillman does his best Rip Torn impression as anti-social mountain man Paul Grogan and Heather Menzies is rookie skip tracer Maggie, looking for missing hikers and finding a long forgotten secret military lab where mutant piranha are being bred… which are, naturally, released into the river system. They race the little biters downstream while the filmmakers provide the requisite blood and gore for the drive-in meat-market: a kid’s summer camp and a waterfront amusement park await the little beasties.

This shamelessly exploitative tale of mutant piranha released in a Texas river becomes an energetic and inventive tongue-in-cheek thriller thanks to the script by future Oscar nominee and MacArthur Fellowship winners John Sayles (recruited by producer Roger Corman to make his feature film writing debut) and witty direction by Joe Dante (in his solo debut, after co-directing Hollywood Boulevard and cutting scores of Coming Attractions in the New World trailer department).

The script is full of contrivances to slow the race down the mountain—a wrecked jeep, a log raft nibbled to driftwood (so to speak) by the fish, an arrest by an overzealous deputy—and they feel like contrivances. Yet Menzies has a bubbly charm and spunky sense of humor as junior detective Maggie and Dillman is perfectly sardonic as the alcoholic hermit roused from his isolation when he realizes that the piranha are headed right toward the summer camp where his daughter is vacationing.

What ultimately differentiates this B-movie gem from the legion of similar knock-offs are the satirical swipes at military arrogance and crass commercialism, Dante’s energetic enthusiasm, and the bursts of black humor (“Sir, the Piranhas.” “What about the goddamm piranhas?!” “They’re eating the guests.”). And my favorite aside is a stop motion lizard creature creeping through the laboratory as Maggie and Paul investigate the army base. It’s just there as a flourish, an added detail that is never paus off narratively but who cares? It’s this kind of personality, a nod to the Harryhausen creature features that Dante loves so much, that makes it so much fun.

The culty cast also includes Kevin McCarthy (star of the original Invasion of the Body Snatchers) as the hysterical scientist guarding the creatures, horror diva Barbara Steele as a devious government researcher, Paul Bartel is the killjoy camp director ,and longtime Corman regular and Dante favorite Dick Miller as an unscrupulous entrepreneur whose Texas twang turns urban wise guy once he’s out of the public eye. Watch for John Sayles as a dopey-looking MP.

Add to My Watchlist on Amazon Prime Video or to My List on Shudder or watch free on Kanopy or on Hoopla, which are available from most public and college library systems.

On Blu-ray and DVD. The Shout! Factory Blu-ray features good humored commentary by director Joe Dante and producer Jon Davidson from previous DVD releases plus an all-new 20-minute featurette (with Corman and Dante, actors Melody Thomas, Belinda Balaski and an aging Dick Miller, plus the effects crew, including future effects superstars Phil Tippet and Chris Walas) among the supplements. There is also ten minutes of good quality home movie footage shot by Davidson, six minutes of outtakes, and galleries of stills and ad art among the supplements.