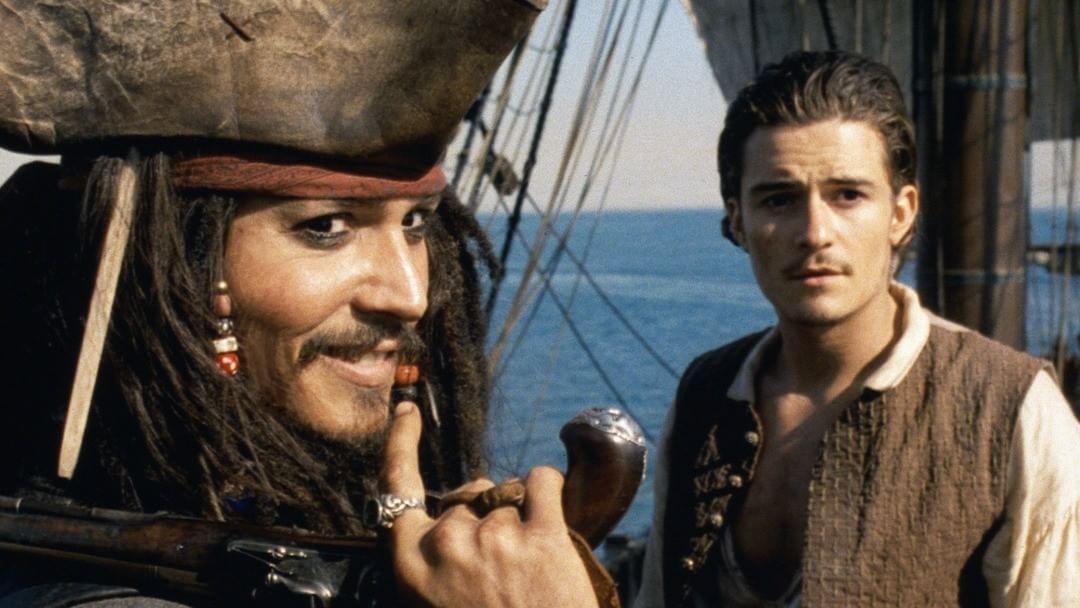 Buried under kerchief, blousy shirt, and the make-up of a heavy metal fashion victim, Johnny Depp bobs and weaves his way through the hit pirate trilogy as Jack Sparrow, a black pirate come high seas con man with a heart of tarnished stolen gold. He seems to have stumbled in from his own private movie but fearlessly makes his home in Pirates of the Caribbean: The Curse of the Black Pearl (2003), a tale of an Aztec curse that turns a vicious crew of plunderers into the walking dead on a haunted ship that floats in a haze of mist and smoke.

Depp keeps the film delightfully off-balance with his unpredictable comic weave, swaying like punch drunk fighter while navigating the solidity of dry land and mumbling his lines like a schizophrenic outpatient; his performance earned an Oscar nomination. Geoffrey Rush “Argh”s and “Matey”s his way through the film like an old Hollywood ham and the dashing Orlando Bloom and the spunky Keira Knightley (as the obligatory cute romantic leads) play along with as much enthusiasm. The first film is the best of the five (to date) films in the comic adventure franchise inspired by the Disneyland theme park ride.

The unexpectedly light touch of director Gore Verbinski (who went to work with Depp in Rango and The Lone Ranger) gives this high spirited comic swashbuckler a playful tone without sinking it into self-parody. He puts a Jackie Chan flourish of high energy and gymnastic action on the swashbuckling stunts and old-fashioned swordplay and keeps this lark sailing along so swiftly and smoothly that you hardly notice the 135 minute running time until the ride is over. A slight but disarmingly entertaining surprise, which isn’t the case with the rest of the films.

, iTunes, GooglePlay and/or other services. Availability may vary by service.
Pirates of the Caribbean: The Curse of the Black Pearl [Blu-ray]

Pirates of the Caribbean: The Curse of the Black Pearl (Two-Disc Collector’s Edition) [DVD]

Pirates of the Caribbean: The Curse of the Black Pearl [Blu-ray+DVD]

The 2-disc DVD and Blu-ray special editions from Disney include commentary tracks (one by director Gore Verbinski and star Johnny Depp, one by producer Jerry Bruckheimer and co-stars Keira Knightley and Jack Davenport, and one by writers Ted Elliot, Terry Rossio, Stuart Beattie, and Jay Wolpert), the documentary “An Epic At Sea: The Making of Pirates of the Caribbean,” three video production “Diaries,” five “Fly on the Set” peeks at key scenes, 19 deleted and alternate scenes, a multi-angle look at the special effects progression of the “Moonlight” scene, a blooper reel, still galleries, an interactive guide to pirate history, and an archival program about on the creation of the Disneyland ride.