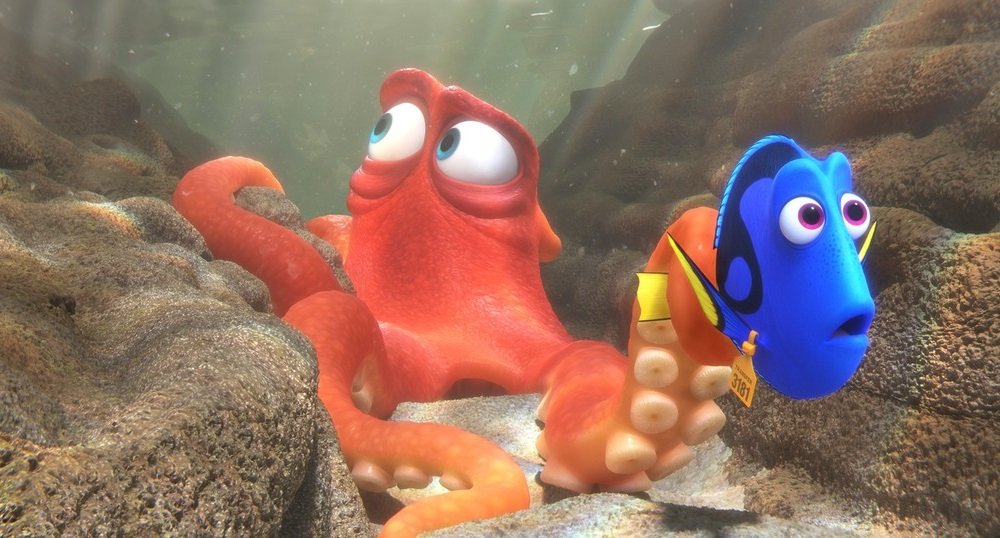 Finding Dory (2016), Pixar’s sequel to its gorgeous animated aquatic masterpiece, can’t shake off its sequel-ness—it plays like a variation on the theme rather than an original take on the familiar tale—but it’s a Pixar picture with all the care and love and storytelling magic that the studio brings to every project. Which makes this adventure a joyous reunion and a lovely odyssey.

The short-term memory loss of the bubbly blue tang Dory (voiced by Ellen DeGeneres), played for humor in Nemo, is now tinged with loss and trauma and regret. We rewind to her childhood and meet her protective parents (Diane Keaton and Eugene Levy), who teach her little songs and mnemonic devices to keep her safe (“Swimming, swimming, swimming…”). It doesn’t save her from separation but it does help her survive the wild depths. Back to the present, taken in by the neurotic worrywart Marlin (Albert Brooks) and his adventurous son Nemo (now voiced by Hayden Rolence), those early childhood memories are slowly coming back and soon they are off across the Pacific again, this time to find her parents at a marine rescue and rehabilitation institute on the California coast. As her memory comes back in shards, she gets a little help from a new group of friends: a nearsighted whale shark (Kaitlin Olson), a sonar-challenged beluga (Ty Burrell), a grizzled seven-armed octopus named Hank (Ed O’Neill) who just wants a one-way trip out of the interactive marine park and into a safe city aquarium. Hank is the breakout scene-stealer in this film, an animated wonder that slithers out of tanks, pours itself into cracks like liquid flesh, and swings through the human world like an alien acrobat in a jungle gym, all while O’Neill grouses like a grumpy old man who just wants to get back to his easy chair. His reluctant yet dogged commitment to Dory’s rescue plan proves that this crotchety old cephalopod is just a suction-cupped softie at heart.

Apart from the obvious visual wonders of the animated aquarium that is Dory, Pixar once again builds a swift, funny, and engaging story on handicapped characters who discover they can live full and loving lives like anyone else. Scenes of the giggly, adorable young Dory (voiced by Sloane Murray) are almost too cute for words but the unconditional love and support of her parents, giving her the tools that could save her life while building her self-confidence with affirmation and encouragement, are more profoundly moving than might appear on the surface. Pixar is still the best when it comes to illustrating its lessons through action and interaction rather than dialogue. Their happy endings are earned and this is no different.

Nemo writer / director Andrew Stanton is back at the helm, co-directing with Pixar veteran Angus MacLane (who was Stanton’s directing animator on Wall-E) and the voice cast also include Idris Elba and Dominic West as a pair of fun-loving sea lions, Kate McKinnon and Bill Hader as a concerned couple that finds (and then loses) the lost little Dory, and Sigourney Weaver as herself… sort of. It’s a witty little vocal cameo that the film has fun with. The odyssey differs from Nemo only in details but those details are what make a Pixar movie.

The disc editions feature the short film Piper (which played in front of the film in theaters), the original animated short Marine Life Interviews (with aquarium denizens remembering Dory), featurettes, deleted scenes, and other supplements.