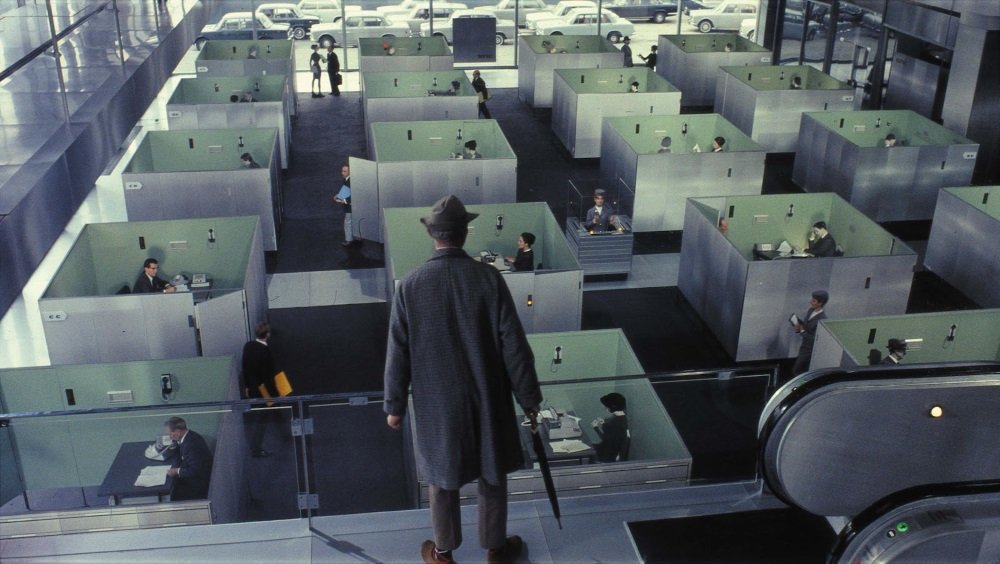 A film comedy directed with the grace of a ballet, the painstaking detail of an action painting and the affection of a love song, Jacques Tati’s Playtime (1967) is one of the most sublime celebrations of individualism in the alienated landscape of modern urban life and consumer culture. This is a different kind of symphony of a city, conducted with rising and falling rhythms that segue from one movement to another over the course of a single day into the night and finally emerging into the dawn.

There’s no real “story” to the film, yet hundreds of tiny little stories can be found playing out in Tati’s widescreen images. Tourists arrive in an airport terminal that has all the personality of an office building. In the swirl of organized chaos arrives Tati’s signature character, the gangly Mr. Hulot, decked out in his trademark overcoat and hat and clutching his familiar umbrella, on his way to a business meeting in the city.

The tourists are efficiently shuttled off to busses for their whirlwind Paris visit, but this isn’t the Paris of ancient brick buildings and romantic bridges and historical monuments, but of skyscrapers of steel and walls of glass looking out onto paved streets packed with commuters and busses and pedestrians in a hurry. As the tourists gawk at the marvels of new inventions and contemporary creature comforts, one young woman (Barbara Dennek) with a dreamy look in her eyes longs for the romantic Paris that is only fleetingly glimpsed in reflections of car windows and glass doors. Meanwhile, Hulot gets lost in the maze of office cubicles and glassed-in waiting rooms while trying to track down a business associate, dwarfed by the size and scale of the coldly impersonal surroundings as he meet indifferent efficiency with comic individualism.

Where so many comedy directors create humor from the outrageous exaggeration of images and situations, Tati creates his from an accumulation of minor touches, little dissonances, imaginative observations, and pieces of creative business: hundreds of details that erupt with lives of their own but fit together like a clockwork mechanism with a human heartbeat. The last half of the film takes place at the grand opening of a brand new nightclub, a mini-movie of its own that opens with workmen and waiters rushing the final details as the first night crowds arrive. It’s a model of modernity where every design flaw becomes glaringly apparent over the disastrous evening, but out of the slow collapse of the club’s dignified façade comes a human revolution, a magical idiosyncratic order created out of fun and laughter and social egalitarianism rising from the chaos. Has a satire of the human behavior in the mechanistic urban world ever been so affectionate?

It was the most expensive film made in France up to that time, thanks to Tati’s epic vision and perfectionism, and it was a financial disaster for the director. But it is sheer grace, Tati’s most beautiful film (thematically as well as visually) and one of the most loving human comedies put to film.

It placed #23 in the 2022 Sight and Sound Greatest Films of All Time poll.

and other services. Availability may vary by service.
Playtime [DVD]

Tati shot the film in 70mm and Criterion’s Blu-ray master does it justice. While the credits sequence looks unduly dirty and noisy, it clears right up when the film proper begins: clean, crisp, rich with detail and simply stunning. The images are so solid and sharp you could cut yourself on them. Criterion re-released the film for a DVD special edition in 2006 and all the supplements included in that generous edition have been carried over for the Blu-ray release. One highlight is the short Cours du Soir (Evening Classes), a comedy about a surreal school for well-dressed businessmen learning the fine art of tripping over steps, walking into walls, and smoking a cigarette like an amateur, written by and starring Tati. The 20-minute biographical portrait Tati Story features generous clips of Tati on film, stage and TV, the six-minute Au-delà de Playtime reveals rare behind-the-scenes footage from the city set he built on the outskirts of Paris, there’s a rare audio interview with Tati from the Q&A of the U.S. debut of Playtime at the 1972 San Francisco Film Festival and Jacques Tati in Monsieur Hulot’s Work, a 1976 program on the director made for the BBC art series Omnibus. Also features an introduction by Terry Jones, select scene commentary by film historian Philip Kemp and a video interview with script supervisor Sylvette Baudrot among the supplements. Simply put, a magnificent release of a magnificent film.