John Boorman had only one feature to his credit, the rock and roll lark Catch Us If You Can with the Dave Clark Five, when he came to Hollywood to direct the one-of-kind thriller Point Blank (1967).

Boorman’s film, based on Richard Stark’s novel “The Hunter,” shuffles the story of a gunman named Walker (Lee Marvin), who is double crossed by his partner in crime and returns (seemingly from the dead) for revenge, into a surreal, abstracted crime drama, splintered with short, sharp shards of memory and driven by an unstoppable sentinel who may be more than flesh and blood. Marvin is enigmatic, to say the least, as he tracks down his unfaithful, guilt-ridden wife, his wife’s sister (Angie Dickinson), the old pal who betrayed him (John Vernon), and finally the syndicate bigwigs, all just to get his due: “I want my ninety-three grand.”

Boorman views L.A. through an alienated lens, edits it more like a European art film than an American crime thriller, and fills it with offbeat, ultra-stylized scenes of violence. Keenan Wynn adds another level of remove to the film as the devil whispering in Walker’s ear, but the real whiplash comes from the corporatization of crime that Walker discovers as he shoots his way up the chain of command, just looking for someone who can pay him his money.

It was added to the National Film Registry in 2016

, iTunes, GooglePlay and/or other services. Availability may vary by service.
Point Blank [Blu-ray]

On Blu-ray from Warner Archive and DVD from Warner Bros. Home Entertainment. Steven Soderbergh hosts the commentary track featuring director John Boorman, engaging Boorman in conversations about the film’s style, the use of color and camera lenses, working with Lee Marvin (who gave Boorman his complete support), and making his Hollywood debut with a film that refused to play by the studio rules. Also features the vintage promotional featurette “The Rock.” 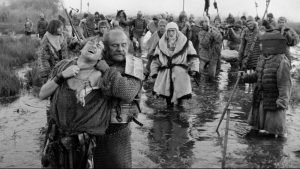