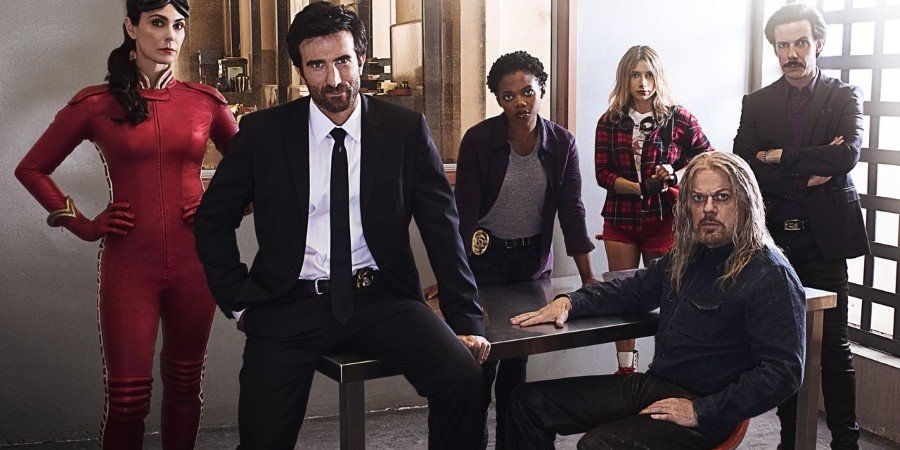 Originally made for the PlayStation Network, Powers is an adaptation of the graphic novel series by Brian Bendis and Michael Avon Oeming, a superhero series from the perspective of the human police responsible for taking on super-powered criminals.

Sharlto Copley (of District 9 and The A-Team movie) plays Christian Walker, the top cop of the LAPD Powers Division of an alternate future where superpowered beings—aka Powers—are the celebrities of the day, displacing superstar athletes, pop stars, actors, and the like, and often acting just as privileged and spoiled as the worst of our media celebs. There are a few genuine heroes and even more outright criminals but it seems that most are simply looking for their moment in the media spotlight, the better to parlay their gifts into an endorsement or two and entry into the hottest nightspots of the city. Walker himself used to be one of them, a caped hero named Diamond who was more concerned with notoriety than service, at least as far as the flashbacks go. Now he’s a civilian, his powers sucked out of him by a cannibalistic supervillain named Wolf (played with insane gusto by Eddie Izzard) and he’s playing grizzled, gruff mentor to Powers Division rookie Deena Pilgrim (Susan Heyward, who looks startlingly like her hand drawn counterpart, no small thing considering Oeming’s bold comic-strip style). He also has history with Retro Girl (Michelle Forbes), an old-school hero who is both a wary ward of her image and a true hero who does what she can to protect the civilians even while she realizes her limitations.

It’s a superhero series on a budget, underplaying the action in favor of the celebrity culture, and the limitations show in sometimes awkward action scenes, minimal sets, and confused writing. Copley overplays the jaded, reckless veteran who has seen it all and while it improves from the pilot episode, it never really establishes its own distinct identity. Next to the stylized superhero noir of Arrow and Gotham, the innocent charge of The Flash or Supergirl, or the retro cool of Agent Carter, Powers is a wannabe with a fashionable cynical attitude and a pared-down style that never makes its sleekly generic visualization of L.A. (Atlanta substitutes for the city) anything more than an impersonal backdrop. It’s a show that needs more comprehensive vision to come alive in its own right. Until then, at least there’s Izzard devouring his co-stars in fountains of blood, and that may be enough for fans who can’t get enough of superhero TV.

Originally available only to the gamer-centric PlayStation Network subscribers, then released on Blu-ray and DVD, this is its first availability on a mainstream streaming service.

Features nudity, sexual situations, foul language, drug use, and bloody violence, and is for mature audiences.

Stream it on Crackle TV here.