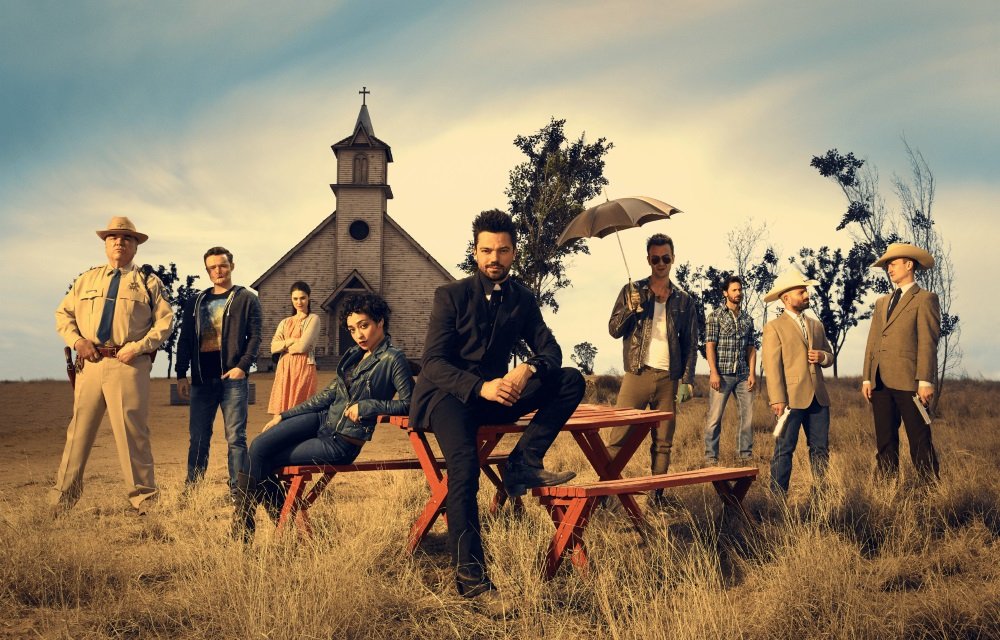 Preacher: Season 1 is based on a comic book series by Garth Ennis and Steve Dillon but it’s no superhero story. This is a tale of angels and demons, God and the godless, and perhaps the end of the world.

Developed for AMC by Seth Rogen and Evan Goldberg with Breaking Bad veteran Sam Catlin, it stars Dominic Cooper as Jesse Cutler, a former criminal who has taken up his father’s position of preacher in his hometown of Annville, Texas, a sunbaked town run by the local cattle baron (Jackie Earl Haley) who wants to expand his business on the land the church currently occupies. While he struggles to help his parishioners, he’s touched by God with the power to command others to do his bidding, a gift that comes with costs (including a pair of oddball angels in ten gallon hats who are ready to kill him to put the power back on the bottle—which, by the way, is not a metaphor). Meanwhile his former lover and partner-in-crime Tulip (Ruth Negga, star of Loving, in devil may care, wild child mode) attempts to lure him back to a life of crime and a wild, hard-drinking Irish vampire named Cassidy (Joseph Gilgun) literally drops from the sky to become Jesse’s sidekick.

The original comic book series opened with the three hitting the road to find God in the first issue. The TV series spends the entire first season working up to that point, filling out the town and establishing the sins that Jesse hopes to redeem in his quest. The first episode is an action-packed blast and the season finale takes a sharp turn into unexpected revelations and hopeless nihilism. It’s a portrait of a community that loses faith and Jesse decides to take matters into his own hands: put things right or tear the whole thing down. Jackie Earle Haley has a great role as a slaughterhouse magnate who wants to expand his operations across the church property and sends an amateur militia to take the church from Jesse and his team.

But if you need just one reason to see it, Ruth Negga’s performance in episode one should seal the deal. Watch her MacGyver a bunch of household items into a bazooka explaining to the process to a couple of kids, beaming a sunny smile almost looks benign and definitely looks like she’s having a blast, and you’ll want to see just where this firecracker is headed.

It’s made for AMC, home of The Walking Dead, another comic book adaptation with blood on its hands, and the creators give the show its own gritty edge of violence, blood, and the grotesque.

, iTunes, GooglePlay and other services. Availability may vary by service.
Preacher: Season 1 [Blu-ray]