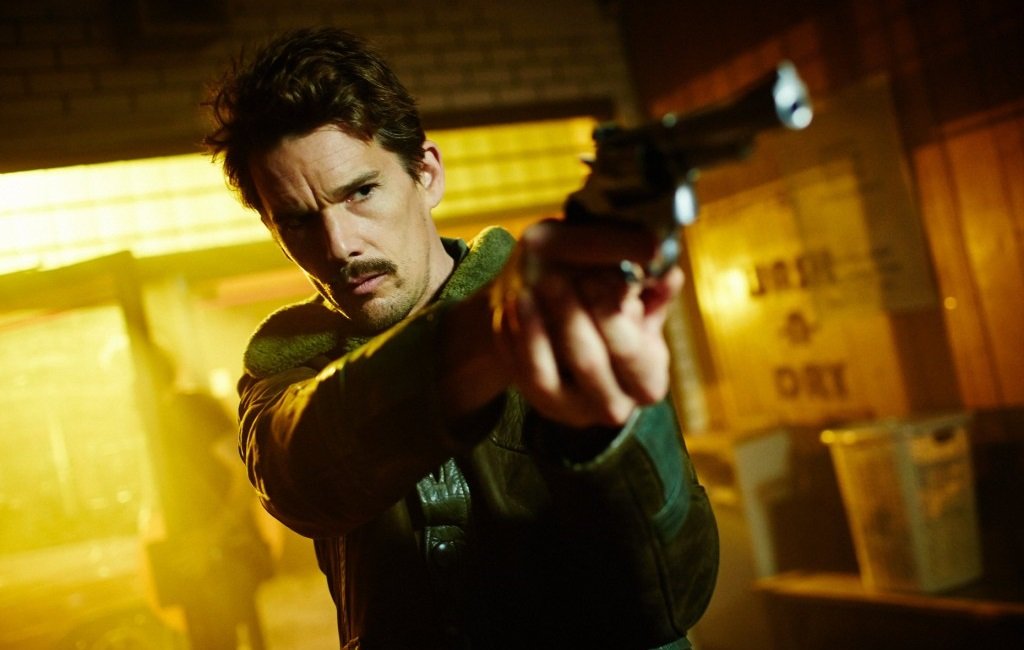 Predestination (2015) is a generic title for a perversely clever time travel tale but you can understand why The Spierig Brothers, the screen credit for filmmaking team Michael and Peter Spierig, didn’t go with the title of the famous Robert Heinlein short story they adapted. “—All You Zombies—” would give audiences the wrong idea. There are no zombies in the story. What we get is much weirder.

Predestination is the story of an agent (Ethan Hawke) for the Bureau of Time Travel on the trail of a deadly bomber and a sad young man who calls himself “The Unwed Mother,” and it offers a life story of tragic, soul-crushing loss, betrayal, and loneliness. Australian actress Sarah Snook plays the young man, who was born and raised a girl and underwent a change of sex because… well, unless you’ve already read the story, the revelation of each dramatic turn is best experienced. Meanwhile, as his / her story unfolds in linear fashion at first, the film starts looping back to reveal a complicated pattern of a life lived in overlapping eras, crossing paths in ways that send our tragic figure down that path as if fated.

For a faithful adaptation of a short story, the film is packed with plot twists and narrative surprises and the challenge faced by the Spierig Brothers is obscuring details that would give away the twists without making it obvious. On that front they are fairly successful—it can be a little distracting when a face is purposely hidden from view, but the story is so strange and the personal ordeal so emotionally crushing that it kept my focus. While one side of my brain worked at sifting through clues and trying to pieces together the grand design, the other side was caught up in the personal odyssey.

It could have become something of a sideshow gimmick but Snook makes it work with an affecting portrait of torment and isolation. Sure, the young man who first enters the bar seems a little “off” in our first meeting (something the film is able to leverage into initial tension), but as the film unfolds, what seems weird simply becomes sad. It’s terribly clever with a densely-woven plot (all of it there in the blueprint of the story), but the human drama and the slow revelation of kinship shared by these two strangers in the bar gives the film its bruised heart and its lost, isolated figure of tragedy a sense of purpose and reason to go on.

, iTunes, GooglePlay and/or other services. Availability may vary by service.
Predestination [Blu-ray]

Sony’s Blu-ray and DVD editions include a featurette and bloopers. The Blu-ray also includes the exclusive 75-minute documentary “All You Zombies: Bringing Predestination to Life.”