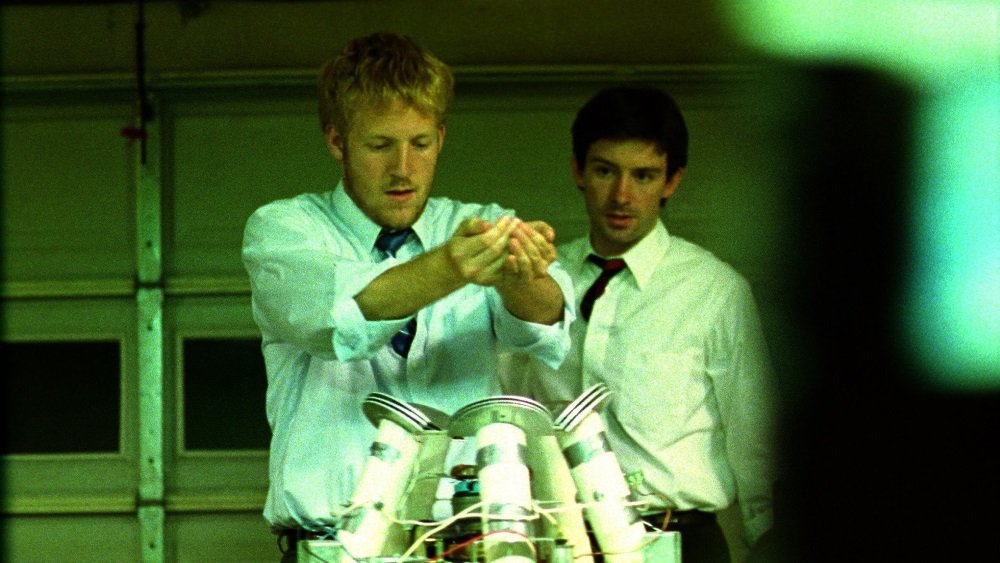 “I’m starving. I haven’t eaten since later this afternoon.”

The most inventive time travel film ever made, Shane Carruth’s almost one man production (he’s director, writer, producer, star, sometime camera operator, and pretty much anything else that needed to be done) is also the most aggressively, tantalizingly obtuse. Aaron (Shane Carruth) and Abe (David Sullivan) are engineers who moonlight as partners in a garage-based start-up firm whose experiments unexpectedly open the doorway to time travel. Their first impulse is to play the market (the time loop only works back in time), dumping them into a cycle of 30 hour days and bizarre hotel trysts, until Aaron quietly sets up his own secret experiments behind Abe’s back, and Abe responds by pushing the envelope of time travel conundrums and comes out the other end with multiple realities and second generation doubles.

Carruth sketches out a story that only he really understands and delivers it in fragments that come pouring out in a nervous cascade of information overload, tossing off the major narrative crossroads of plot points and shading in the rest with references to scenes unseen and exposition only hinted at. Carruth has an eye for composition, creating a world that seems just slightly alien, and his constant use of a slow-moving camera adds drama and anticipation to the scenes. Even in dialogue exposition the film feels like it is hurtling ahead beyond our ability to keep up. This is a film for people who like to grapple with their films and I invite intrepid film lovers to go a few rounds at least.

If you want to explore the complicated timelines of the film, check out this feature from Time Out London.