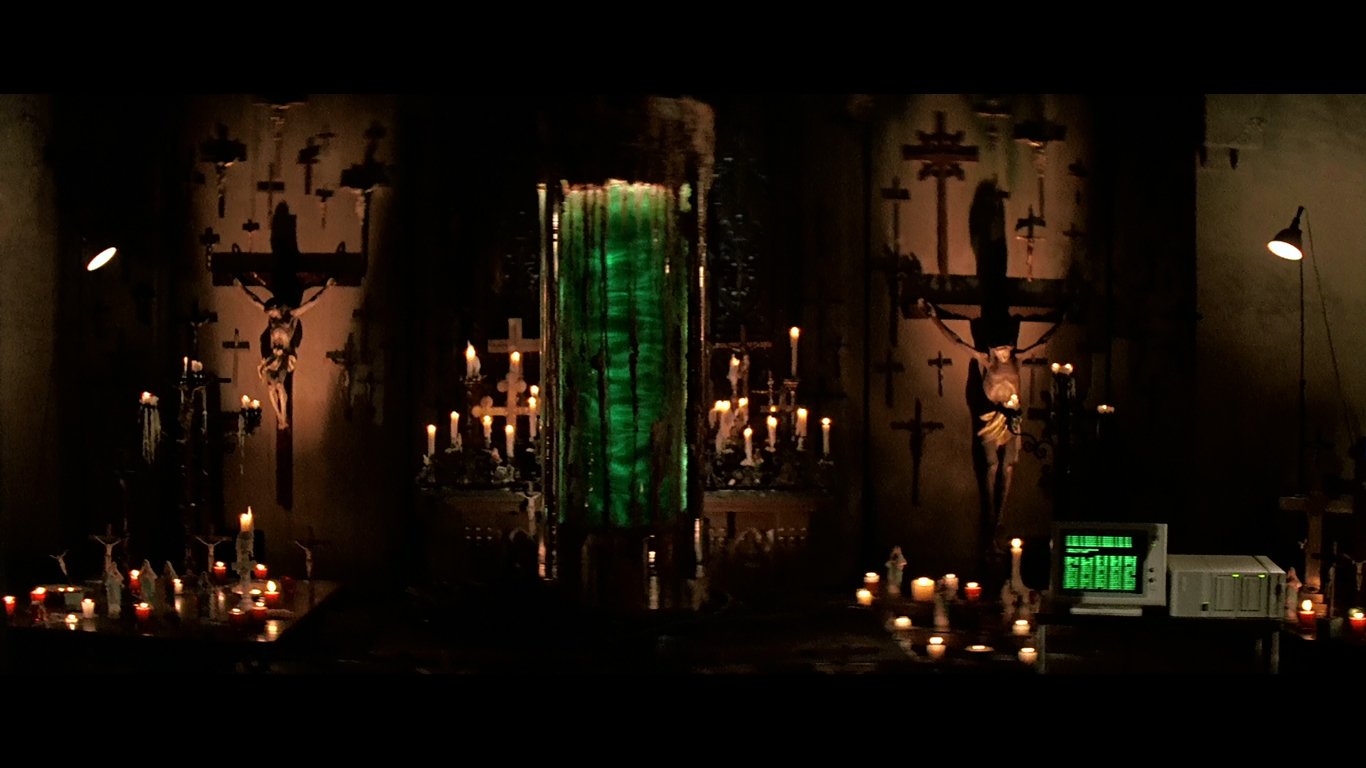 Prince of Darkness (1987) gets my vote as the most underrated movie in John Carpenter’s oeuvre.

“While order does exist in the universe, it is not what we had in mind,” explains Howard Birack (Victor Wong), a professor of theoretical physics in the opening minutes of the film. That’s as good an introduction as you can get to the metaphysical mix of quantum physics and Christian mythology.

In the basement of a lonely church in a Los Angeles slum, an ancient cosmic force is kept guarded by the Catholic Church, a secret from even the Vatican. The priest (Carpenter favorite Donald Pleasance) charged with guarding this force, what appears to be green goo kept in a giant container, calls in Birack and his best students (Jameson Parker, Lisa Blount, Dennis Dun, and others) when is suddenly whirs to life.

This is a low budget production for Carpenter and he gets creative with simple, practical special effects (including a beautiful image right out of Cocteau’s Orpheus). It has the effect of grounding the horror in the material world, while his creative touches suggests an otherworldly source.

His images are superb but his ideas are even more unnerving. Carpenter wrote the film under the pseudonym Martin Quatermass, a tribute to writer Nigel Kneale (creator of the Quatermass films). This is very much in the Kneale tradition, bringing myth and science together in a concept that downright unnerving, in a classic Carpenter framework. This isolated group, camped up and cut-off in a dark, dungeon-like basement, recalls the siege thriller of Assault on Precinct 13 and the paranoia of The Thing, especially as members of this groups seem to become entranced or even possessed and the homeless outside start to circle the church like a zombie army (that’s Alice Cooper as the leader of this silent swarm).

Carpenter mixes religion and metaphysics in a way that borders on the Catholic idea of blasphemy. In an era where demons and devils were familiar horror movie threats, it was subversive for an American film. If some audiences thought The Da Vinci Code was sacrilegious, the implications of the ideas tossed around here are downright revolutionary, and to Carpenter’s credit he lets the audience draw their own conclusions to the ramifications. It’s a film that, thin characterizations and a few awkward performances aside, gets better with each viewing.

Dirk Blocker and Peter Jason costar and Gary Kibbe, who graduated from camera operator to cinematographer in this production, went on to shoot numerous films for Carpenter including They Live, In the Mouth of Madness, and Vampires.

It’s the second film in what became known as Carpenter’s “Apocalypse Trilogy,” bookended by The Thing and In the Mouth of Madness.

Shout! Factory gives the film its Blu-ray debut with commentary by John Carpenter with actor Peter Jason, interviews with John Carpenter, Alice Cooper, effects supervisor and actor Robert Grasmere, and co-composer / arranger Alan Howarth, a “Horror’s Hallowed Ground” tour of the locations, and an alternated opening from the TV version.