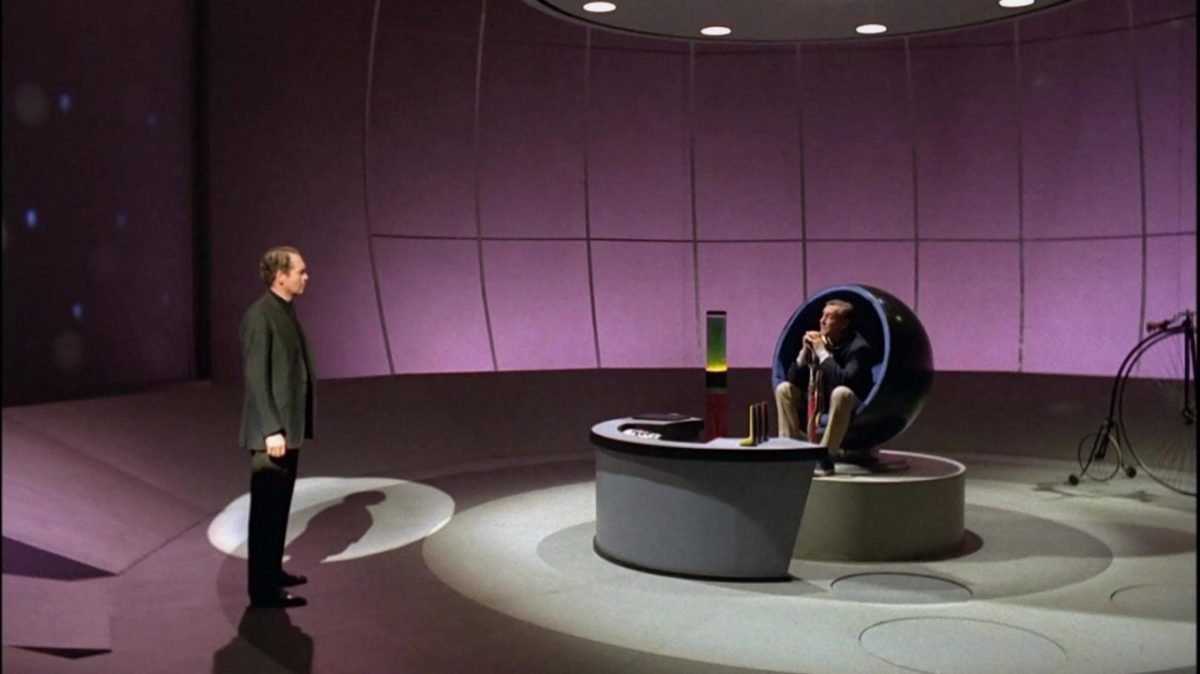 “I will not be pushed, filed, stamped, indexed, briefed, debriefed, or numbered. I am my own man.”

There are those who proclaim The Prisoner (1968), Patrick McGoohan’s cerebral spy show and portrait of personal freedom as an existential prison, the greatest TV show of all time. I won’t argue the point. His insidiously paranoid take on conspiracy, the world order and the nature of identity is no less timely forty years after it was made. No other TV show dared be as enigmatic or philosophically complex and the suspicious view of global power politics still tops the fantastic conspiracies of X-Files and Fringe and friends.

Star, creator, and sometime writer and director Patrick McGoohan mixes James Bond and 1984 in the story of an unnamed British agent (who bears a striking similarity to a certain John Drake from Danger Man / Secret Agent) who, in the opening episode, resigns in a furious confrontation. But before he can leave, he’s ambushed and wakes up in a gingerbread-like tourist town called The Village: a prisoner in an isolated artificial society (a lovely Euro-mash of architecture styles and tourist town constructs), given a number in place of a name and put through elaborate theatrical pageants designed to break his spirit and his individualistic defiance.

McGoohan turned the genre, and TV itself, inside out with this ingenious political allegory played as a conspiratorial mind-game of elaborate psychodramas and, though it ran a mere 17 episodes, it became an instant cult classic. The essence is set up in the pilot The Arrival, where marvelous details (a personal diary with comments pre-written, a radio that won’t shut off) define a toy city of people completely assimilated: given in to the fantasy of freedom and playing out their lives in a pretense of free will. They passively accept their numbers and the constant surveillance of a faceless Big Brother and a succession of interrogators all called Number Two.

The tightly plotted The Chimes of Big Ben is a great escape as a fearless mind game with a brilliant twist that implicates every intelligence service in the world in this Village. The new Number Twos try to break his will by shattering his identity (The Schizoid Man, A Change of Mind, Do Not Foresake Me…) while Number Six proves equally adept at turning the web of control and paranoia back on his jailers (It’s Your Funeral, Hammer Into Anvil).

Other favorites include the election-oriented Free For All (a brilliant deconstruction of the façade of democracy in the modern age), the near wordless tour-de-force Many Happy Returns (a most unusual birthday present for Number 6), the bizarre western recasting Living in Harmony (including a dusty High Noon-ish pre-credits sequence), the spy-movie fairy tale The Girl Who Was Death (one of the show’s lighter moments, told with tongue firmly in cheek) before returning to the mind-games of the mind-blowing two-part finale written and directed by McGoohan himself. Leo McKern returns as Number Two (the first former Number Two to return to the position) in Once Upon a Time and Fall-Out.

Add to My List on IMDbTV or watch on Shout! Factory TV or Tubi, all of which are free, ad-supported streaming services.

, iTunes, GooglePlay and/or other services. Availability may vary by service.
The Prisoner: The Complete Series [Blu-ray]

The DVD and Blu-ray editions from A&E Home Video include all 17 original episodes (with original mono and remixed 5.1 surround soundtracks), with production commentary on seven episodes and alternate edits of The Arrival and The Chimes of Big Ben, as well as trailers and image galleries.

For the Blu-ray debut, they’ve gone back to the original film elements and remastered the series afresh. The show’s visual austerity comes through looking sharper and cleaner than ever. It also includes a bonus DVD featuring interviews with music editor Eric Mival and guest Number Two Peter Wyngarde and the feature-length documentary Don’t Knock Yourself Out, a 2007 production and the first comprehensive portrait of the show from origin to aftermath. “If whatever we wanted to say is not already contained within the episodes of the series the I failed in the production of them and any amount of chit-chat now will not make good that omission.” Patrick McGoohan’s statement frames the feature and true to form that quote marks the extent of his presence in the documentary. (It’s not even a clip, it’s written on the screen.) There are plenty of witnesses to the show, from members of the crew to numerous guest stars, and they offer a less than flattering portrait of McGoohan on the set: intense, overworked, short-tempered and increasingly possessive of a vision he took stronger control of as he clashed with collaborators and even fired a director (the “Joseph Serf” directorial credit was a pseudonym used by McGoohan on his first episode). This is not the story of a smooth set and warm camaraderie. “He was almost impossible to work with,” said Leo McKern (in archival footage), who reportedly had a nervous breakdown as McGoohan turned the battle of wills in the penultimate episode of the drama into a battle between the actors. McKern called him “A dreadful bully” and many others agree. But the documentary lacks focus and perspective, adding up to little more than a series of anecdotes (some insightful, most not) over a narrative structure.

1968, A Change of Mind, Amazon Prime Video, Blu-ray, Do Not Foresake Me…, DVD, Fall-Out, Free For All, Hammer Into Anvil, IMDbTV, It’s Your Funeral, Living in Harmony, Many Happy Returns, Number Six, Number Two, Once Upon a Time, Patrick McGoohan, Peter Wyngarde, Shout! Factory TV, The Arrival, The Chimes of Big Ben, The Girl Who Was Death, The Prisoner, The Schizoid Man, tubi, VOD