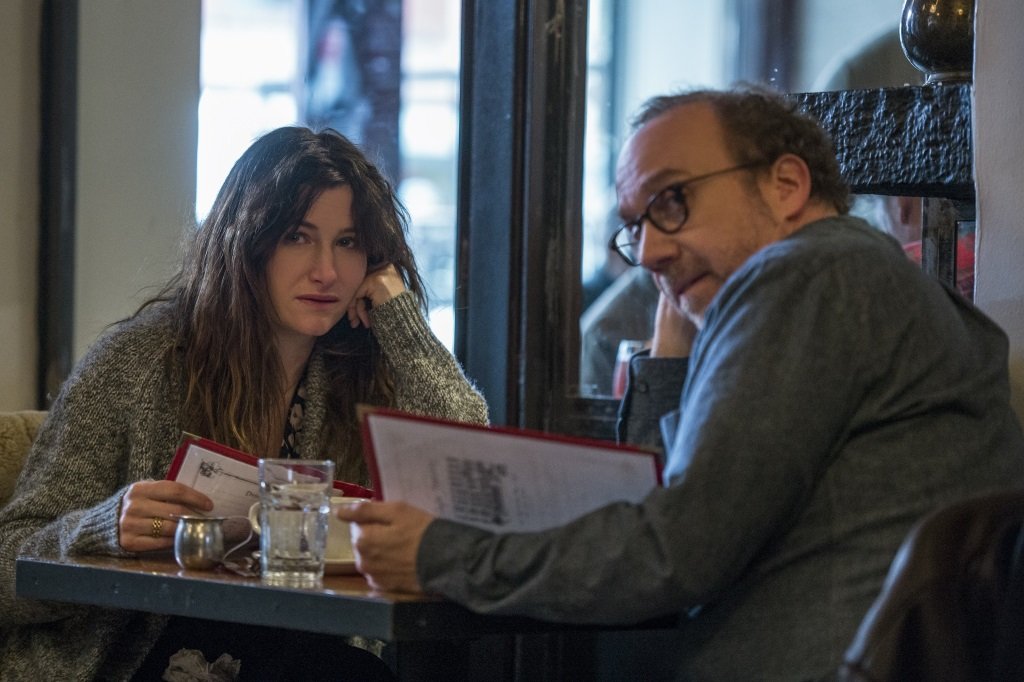 Paul Giamatti and Kathryn Hahn star as a married couple struggling to have kids late in life in Private Life (2018, not rated), a spiky drama with comic edges from director Tamara Jenkins.

“Private Life is impressively squirmy, delving into every nook and cranny of Richard and Rachel’s experience as a 40-something couple trying to conceive a child,” writes David Sims for The Atlantic. “Rather than delight in their cosmopolitan lifestyle, Jenkins uses her gift for capturing intimacy as a weapon, telling a story that’s sometimes brutal, other times acidly funny, but always honest.”

It comes direct to Neflix from the film festival circuit.

Into The Dark: The Body, a darkly comic tale of a hitman hauling a body across town on Halloween, is the debut installment of the horror anthology series created by low budget horror specialist Blumhouse Production.

Variety critic Daniel D’Addario describes it as “a down-and-dirty eighty-minute gorefest whose rapid pace and nihilistic attitude recall, for instance, this summer’s Blum flick Upgrade or his Purge franchise. If episodes of anthology series are indeed films, this is streaming’s version of a B-movie.”

Inspired by a true story and shot in and around Portland, Oregon, Leave No Trace (2018, PG) is a touching indie drama starring Ben Foster as a troubled military vet and loving single father trying to raise a daughter (Thomasin McKenzie in a revelatory performance) off the grid. On Cable On Demand and VOD, also on DVD and at Redbox.

RBG (2018, PG) charts the life and career of U.S. Supreme Court Justice Ruth Bader Ginsburg from legal scholar to pop culture icon. Could it be more timely? It debuts on Hulu.

Sicario: Day of the Soldado (2018, R), starring Benicio Del Toro and Josh Brolin, blurs the line between the war on drugs with the war on terror. It’s both a straightforward thriller and a complicated story of government cover-ups and human sacrifices and one man’s moral code defying orders to do right. Italian filmmaker Stefano Sollima (in his English language debut) does justice to both. Also on DVD and at Redbox.

Jason Clarke is Ted Kennedy in Chappaquiddick (2017, PG-13), which dramatizes the real-life car accident that killed a young woman (Kate Mara) and the scandal that ensued.

Netflix is picking up Designated Survivor, the unusual Kiefer Sutherland political drama that was recently cancelled by ABC. As it prepares to give the show a third season, you can now stream the first two seasons.

Foreign language TV: Élite: Season 1 (Spain, with subtitles) is a melodrama set in an exclusive private school where the rich and poor clash. Also new:

Prime Video original series The Man in the High Castle returns for a third season of the alternate history thriller of America under Nazi occupation.

Haunting horror remake Let Me In (2010) relocates the adolescent vampire drama from Sweden to the American Midwest and made a star of Chloë Grace Moretz.

The live TV version of Arsenic & Old Lace (1962) features Boris Karloff in the role of Jonathan, which he created on Broadway but never before played on screen.

Also new this month: Edward Norton is The Illusionist (2006, PG-13) in the turn-of-the-20th-century magician mystery;

Galaxy Quest (1999, PG), a Star Trek spoof with Tim Allen and Sigourney Weaver, has become a cult comedy in its own right (Prime Video and Hulu).

When making your Halloween list, don’t forget to add Zombies of Mass Destruction (2010, R), a satirical and witty gore-fest produced in and around Seattle by local filmmakers (Prime Video and Hulu).

The Nightmare Before Christmas (1993, PG) brings the playfully macabre humor of Tim Burton to life through the old-school magic of stop-motion animation by director Henry Selick and music of Danny Elfman. It’s a Christmas movie and a Halloween treat all in one and is family friendly to boot!

TCM Select Pick of the Week is Random Harvest (1942), one of sixteen films featuring “Star of the Week: Greer Garson.”

Also featured is “Director of the Week: Roberto Rossellini,” from his landmark Neo-realist classics Rome Open City (Italy, 1945) and Paisan (Italy, 1946) to his historical studies The Taking of Power by Louis XIV (Italy, 1966) and The Age of the Medici (Italy, 1973), and “Cinema Passport: Taiwan,” a selection of five films including A Touch of Zen (Taiwan, 1971) and Yi Yi (Taiwan, 2000). All unrated and with subtitles.