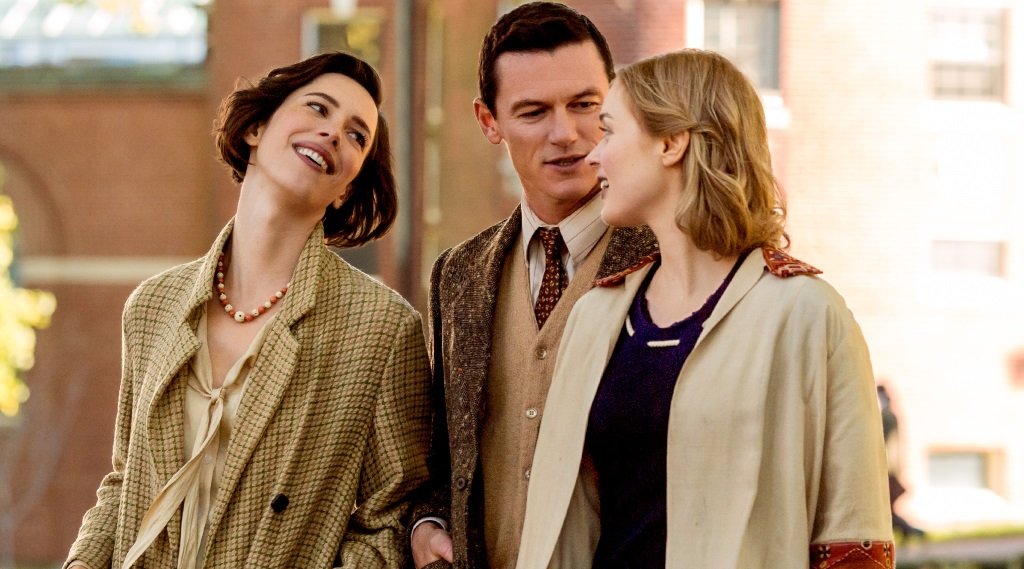 Professor Marston and the Wonder Women (2017) is not your usual comic superhero origin story. It turns out that the majestic Amazon princess from a mythic island of female warriors was born of a Harvard psychologist and outspoken feminist who had a polyamorous relationship with two women who inspired the character and a passion for sexual bondage play.

The strange, fascinating story of Dr. William Moulton Marston, who created of the first female comic book superhero, was told by Jill Lepore in “The Secret History of Wonder Woman.” Angela Robinson’s film isn’t adapted from Lepore’s book but the basic story is the same. Some of the less appealing aspects of his life smoothed over and much of the personal drama fictionalized, and as comic book buffs will point out, some of the history of the four color character is simply wrong. But the film isn’t about the creation of a feminist icon as much as it is about the lives that inspired it and the culture it challenged.

Welsh actor Luke Evans plays William Marston, a charming and passionate educator who, working with his gifted wife Elizabeth (Rebecca Hall), in 1928 developed the first lie detector, which measured changes in systolic blood pressure. Bella Heathcote is his comely and curious student and teaching assistant Olive Byrne (the real-life niece of Margaret Sanger) and in a rather neat twist on the college prof falling for the hot student, it turns out that Olive is in turn attracted to the smart and sardonic Elizabeth.

Being open-minded adults in the close-minded culture of 1920s America, they set up house together with a cover story. Their three-ways with ropes and corsets and games of willing submission are a little harder to explain away to the neighbors and to the government watchdogs who call out William’s work on the comic book he pitched as a feminist icon for young girls yet filled with scenes of the Amazon princess being tied up and gagged.

What’s so surprising is how Robinson, who scripts as well as directs, makes this into a mature love story between three consenting adults pushing past their emotional comfort zones. William may not quite get Elizabeth’s resentment at being refused a degree from the male-only Harvard (you might say he doesn’t quite acknowledge his male privilege) but his respect for her work, her intelligence, and her individuality is genuine and without qualification. They are true partners, even if he’s the one that gets the public credit. But Elizabeth is the film’s true wonder. Rebecca Hall gives her a dynamic inner life you can bubbling in flickers of across her mouth or in darting eyes. She never stops struggling with her conflicted feeling and anxieties as they push past social taboos.

Robinson’s fictionalized scenes of art imitating life (the backlit scene of Olive in tights with a coiled rope in her hands is practically a comic book cover brought to life) tend to hit things a little squarely on the head, with William drawing elements of his stories directly from life. Best think of those scenes as metaphors for the way the powerful woman in William Marston’s life were models for the kind of strength he wanted to put in comic books for both girls and boys to see. Robinson sands off some of the rough edges of William’s story and fictionalizes much of the personal story, but she also presents a polyamorous arrangement in the conservative society of America between the World Wars where all three characters are equals partners.

Whatever liberties it takes with the actual lives of these characters, it is a striking and inspiring story to put on screen.

, iTunes, GooglePlay and/or other services. Availability may vary by service.
Professor Marston & the Wonder Women [Blu-ray]

The DVD and Blu-ray from Sony Pictures Home Entertainment includes the 8-minute featurette “A Dynamic Trio: Birth of a Feminist Icon,” which focuses on the creative work of Marston, and “A Crucial Point of View: Directing Professor Marston and the Wonder Women” with filmmaker Angela Robinson, who spent a long time developing this project.

Exclusive to the Blu-ray is “The Secret Identity of Charles Moulton,” a short introduction to the characters with simplified animation, plus three deleted scenes and an Ultraviolet Digital HD copy of the film.

Pingback: What to stream: 'Altered Carbon' and 'Babylon Berlin' on Netflix, spy drama 'Absentia' on Amazon Prime - Stream On Demand
Comments are closed.