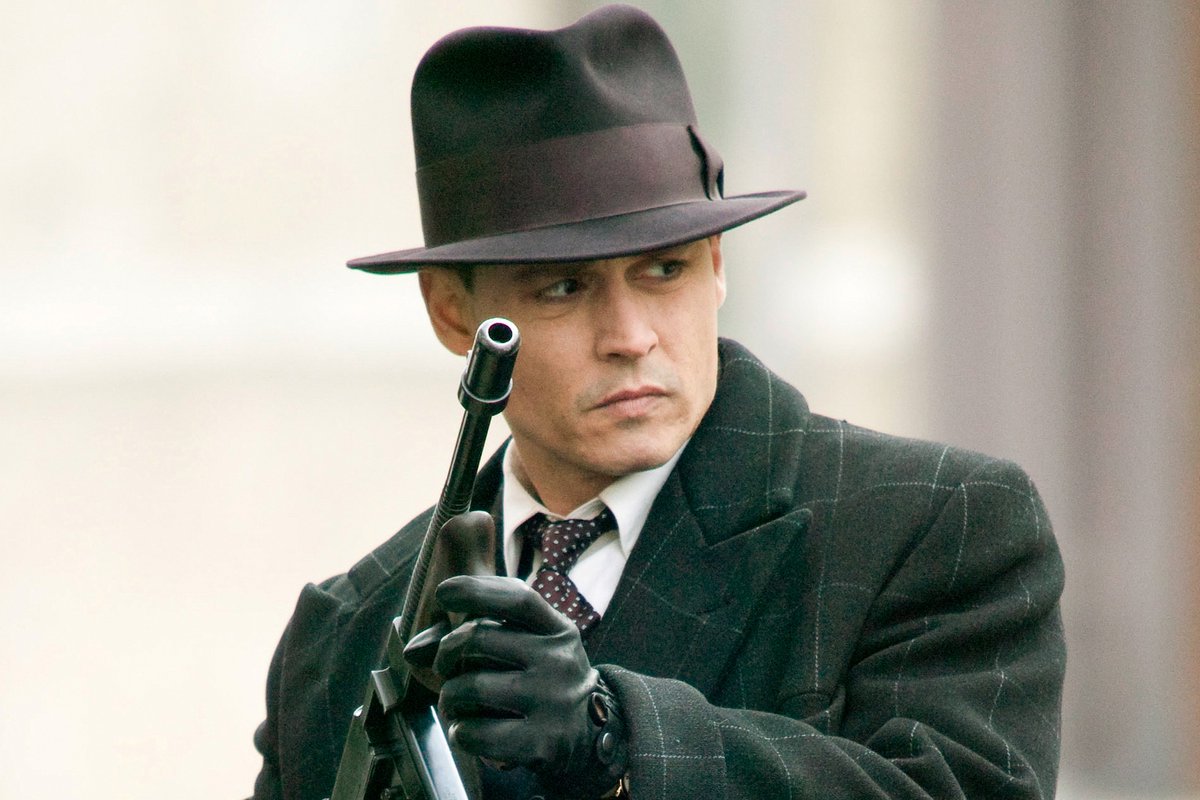 Public Enemies (2009) is Michael Mann’s take on the gangster glory days of the depression, when the most flamboyant and notorious bank robbers became the outlaw heroes of the day. That makes Johnny Depp great casting as John Dillinger, whose spree of daylight bank robberies and daring getaways between May 1933 (when he was paroled after serving an almost nine-year prison stretch for armed robbery) and July 1934 got him branded “Public Enemy Number 1” by the FBI and made him a folk hero to many Americans.

Mann plays on that mystique in Public Enemies. Depp’s Dillinger is a charmer and a savvy media player, with a natural geniality born of confidence and courage that borders on thrill-seeking. He targets banks not just because that’s where the money is, but because in the depths of the Depression, many dispossessed Americans saw banks as the enemy and Dillinger as a kind of Robin Hood figure getting some back for them. He’s cool and cagey, keeping his emotions in check on the job but for a cocky little grin that he lets slip when things are going his way, while off the job he lets himself fall for Billie Frechette (Marion Cotillard), a beautiful hat check girl that becomes the love of his outlaw life.

In contrast the vibrant and charming Dillinger is his FBI counterpart Melvin Purvis. As played by Christian Bale, he’s the loyal officer in J. Edgar Hoover’s FBI, all tight restraint and modest behavior, just as cool as Dillinger and far more patient. His entire being is devoted to the FBI and Mann’s screenplay (co-written with Ronan Bennett and Ann Biderman) doesn’t give him a life outside of his job. In the battle of wills, Purvis may be stronger but Dillinger is far more fun to watch.

Public Enemies is a thinking man’s gangster film, less about thrills than the mechanics of Dillinger’s heists and Purvis’ investigation, which he executes with his usual precision. Mann loves to dissect the details of men at work and admire the professionalism of his characters in action, whether it’s the mechanics of a successful prison break or the systematic efforts of Purvis and his squad to patiently gather evidence and tail suspects until he pieces enough together to find his man. But it’s also about end of the gangster era, shut down not just by the efforts of the FBI but the increasing power of the mob syndicate as it leaves violent crime behind for the less public activities like gambling. Dillinger and his cohorts are bad for business.

Mann doesn’t pretend that Dillinger is any kind of hero. He’s a ruthless bank robber who thrives on violent crime, but he’s genuinely loyal to his partners and brave to the point of recklessness. He makes a show of never robbing the civilians in the banks and only taking money from the vaults and the teller cages. It’s all part of cultivating his image, to be sure, but it gives him a gravitas that the other machine gun punks of the era lack. He is the gangster rock star, a machine gun-toting thug as pin-up acting out the anger that everyday Americans feel. His genius was tapping into those feelings. His downfall was his arrogance in thinking it could go on forever.

On Blu-ray and DVD and on SVOD through Amazon Video, iTunes, GooglePlay, Fandango, Vudu and/or other services. Availability may vary by service.
Public Enemies [Blu-ray]