I like to think of Cinemax as the grindhouse version of HBO: not as exclusive, not as ambitious, not as high-toned (late night Cinemax wasn’t called “Skinemax” for nothing). And it’s the same when it comes to original programming, the cable TV mark of distinction. Where HBO boasts such impressive productions as The Wire and Game of Thrones and Watchmen, Cinemax is all about sexploitation shows and, more recently, action-oriented pulp fictions, big on testosterone and violence, light on character and story.

Banshee (2013-2016) isn’t something different, but it finds the balance between gritty action and intriguing storytelling. Admittedly, the premise is a little absurd for the modern world of instant communication: a career criminal (Antony Starr) fresh out of prison appropriates the identity of an Oregon lawman who is killed by thugs in a bar fight and takes his position as Sheriff Lucas Hood, the new head lawman of a small Pennsylvania town called Banshee.

No one checks his credentials or questions his thoroughly unconventional tactics, but maybe that’s for the best, since he’s the first sheriff to stand up to the local crime lord, Amish outcast and town butcher (literally and figuratively) Kai Proctor (Ulrich Thomsen). And did I mention that his former girlfriend and partner in crime Carrie (Ivana Milicevic) has also taken up a new identity and is now wife of the local DA and mother of two children? Or that the former crime boss (Ben Cross) they betrayed 15 years ago is still out for revenge?

The show opens with one of the most unlikely and impressive bus crashes you’ve ever seen, fills in the town with complicated, contradictory characters with unusual backstories and outsized motivations, and stirs with extreme situations and over-the-top solutions. Lucas is another bad guy who seems to enjoy using his skills to be a good guy, but while he zealously protects his adopted home, he carries on a crime wave in surrounding towns and builds a small gang of partners, including a flamboyant cross-dressing hacker (Hoon Lee), a washed-up prize-fighter and ex-con (Frankie Faison), and his old lover, who is busy trying to force him out of her new life when they’re not busy having angry sex.

This is crime TV at its pulpiest, with an unusually sex-positive approach to the obligatory softcore scenes and a brutal twist to the violence. Creators David Schickler and Jonathan Tropper embrace both the conflicted personalities of their characters and the extreme possibilities of crime stories on pay cable, and one wonders if executive producer Alan Ball helped them hone their ideas into a dynamic show. Either way, it’s unexpectedly involving, outrageously unexpected, and thoroughly entertaining.

And don’t forget to stick through the credits; there’s a little kicker at the back end of each episode.

The second season begins with fall-out from the end of season one, with Kai Proctor’s rebellious niece Rebecca (Lili Simmons) leaving her Amish community and embracing the opportunities as she becomes her uncle’s apprentice in his version of the family business. Tensions between the townsfolk, the Amish community, and the nearby Kinaho reservation heat up after the murder of a young Native American girl and the disappearance of an Amish boy, a volatile situation that the sheriff ignites with the ill-advised invasion of the reservation to question a suspect. This stand-out episode is the series at its best, using a splashy murder to explore the tensions and resentments in the community and bring antagonists together for a common mission, and it features two of the most riveting fight scenes of the series. The common ground doesn’t last for long and before the end of the season, Lucas declares war on Kai and his mob, using his own criminal team to do what his law officers aren’t able to.

In season three, Lucas discovers that the corrupt commander of the local military bas is skimming from the cash he’s supposed to be safeguarding for operations in Afghanistan. Meanwhile Lucas takes on a militant Native American militia leader (Chayton Littlestone) who declares war on white society and (in a memorable episode) lays siege to the police station. The stand-out episode of the season, however, is the vault heist on the well-guarded military base, presented from the POV of a series of surveillance cameras and edited with the crispness that both nails the tension and carries the momentum of the swiftly-paced extended sequence.

What makes Lucas so interesting is how becomes serious about protecting the town and applying his criminal skills to policing, even pulling the real cops into his rogue missions. The show delivers well-mounted, hard-edged action in every episode, much of it with a brutal edge, and plenty of sweaty sex and nudity, while keeping audiences hooked on the twisting stories and committed characters, which earned the show a devoted following.

Unfortunately the show faltered in its fourth and final season, which opens two years later with Lucas living off the grid in the woods, his crew is scattered, and one partner captured. It takes a serial killer to rouse him from his isolation and get the gang back together to rescue their abducted colleague and catch the killer. Unfortunately, the season gets tangled in multiple stories: Carrie turns vigilante to take out her aggressions on the thugs and bullies of the town, the white supremacist gang working for Kai plots to take over his drug business, and a sect of Satanists prey upon the community. It gets too overstuffed and overly contrived in an effort to top the spectacle of previous years, the flashbacks woven through the story add more confusion, and the happy ending is unconvincing considering everything they’ve been through.

But at its best, Banshee showcases hard-edged action, hot-blooded sex, and pulp-oriented stories in a clever, tightly-plotted crime series with vivid characters and impressive action set pieces. Ten episodes per season except for the fourth season, which runs eight episodes.

And note that series star Antony Starr continues his reign in extreme pulp TV as psychotic superhero Homelander in the Amazon Prime Original series The Boys. 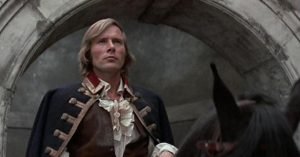