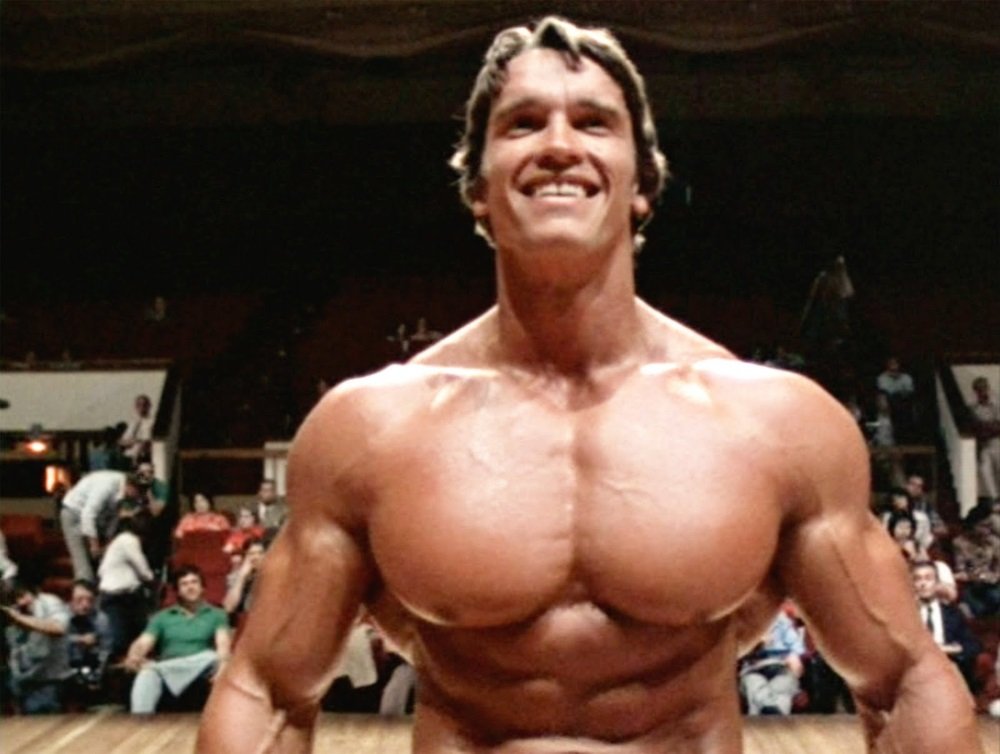 Anyone who believes that Arnold Schwarzenegger’s rise to Hollywood superstar was a fluke needs to see Pumping Iron (1977), George Butler’s documentary on bodybuilding culture of the 1970s which did more to popularize the sport in the culture at large than anything before or since.

The film follows a handful of bodybuilders preparing for the Mr. Universe and Mr. Olympia competitions of 1975, focused on the underdog challenge of working class kid Louie Ferrigno (before he became The Incredible Hulk for TV) against savvy veteran Schwarzenegger, who is competing for his sixth Mr. Olympia title. Schwarzenegger was a superstar in the bodybuilding world, the subject of photo shoots and as big a celebrity the sport had seen. He had tried his hand at making movies, notably as the star of the comedy Hercules in New York and a supporting role as a competitive bodybuilder in Stay Hungry, but Pumping Iron turned the bodybuilding superstar into an icon in the culture at large.

In contrast to Schwarzenegger’s public workouts in a glitzy gymnasium is Ferrigno, the underdog amateur trained by his father and brother. Deaf from an early age, the film follows him preparing for his debut professional competition… against Schwarzenegger.

The stage show is all about oiled hardbodies and sculpted musculature, but the movie is a portrait of competition as war and Schwarzenegger as the warrior supreme, with an absolute commitment to his workouts and ruthless tactics in psyching out opponents before a contest. He puts on a performance with every public appearance and Butler catches it all: an actor who knows exactly who he is, what he wants, and how to get it. This is the film that really made Arnold a star.

Also on Blu-ray and DVD and on SVOD through Amazon Prime, iTunes, GooglePlay, Fandango, Vudu and/or other services. Availability may vary by service.
Pumping Iron: 25th Anniversary Special Edition [DVD]