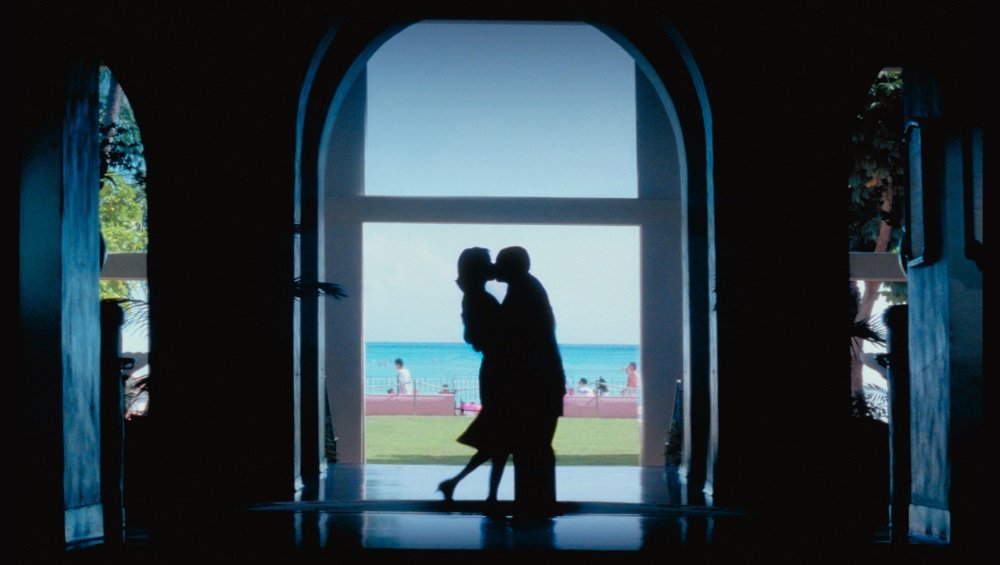 Paul Thomas Anderson, fresh off the critical successes of Boogie Nights and Magnolia, wrote Punch-Drunk Love (2002) for Adam Sandler while he was riding high on the success of doofus comedies. He channels the familiar Sandler personas—the meek boy-man, the repressed powerkeg who explodes with uncontrollable rage, the mumble mouth goofball, the socially retarded misfit—into a compassionate portrait and gives Sander an adult romance.

Sandler’s Barry Egan, a salesman of novelty items, is a man living in the controlling, teasing, smothering presence of his sisters who spent their lives purposely humiliating him and now continue to do it as a matter of course. Emily Watson is the woman who reaches through the wall that this man has cocooned himself in and reassures him in a way that makes her every man’s dream woman and provides the safety to reveal the human being under the comic tics.

The story constantly twists into unexpected territory (a phone sex scam turns ugly and predatory) and Anderson pushes it with a camera that at times slips the images into uncomfortably off-balance compositions, and at others whips around the whirlwind of activity with a violence that could cause motion sickness and a soundtrack that seems to drown the viewer.

Needless to say it left fans of Sandler’s doofus man-boy comedies scratching their heads—it’s not the only film that gives Sandler a more complex character but it is certainly the strangest—and Watson’s character is denied the same complications and depth of Sandler. But it is still weird in all the best ways, a film of unexpected bounces and unusual shadings, and it won of the Best Director Prize at the 2002 Cannes Film Festival.

The Criterion Blu-ray and DVD releases feature a new 4K digital transfer (supervised by Anderson). New to this release are new interviews with composer Jon Brion (28 minutes) and curators Michael Connor and Lia Gangitano (discussing the art of Jeremy Blake, which is featured in the film; 21 minutes), a new 10-minute featurette with behind-the-scenes footage of scoring sessions for the film’s soundtrack at Abbey Road studios, cast and creator press interviews and press conference from the Cannes Film Festival debut, and an NBC News interview from 2000 with David Phillips, “the pudding guy,” which in part inspired the film.

Carried over from the previous DVD release are two deleted scenes (including one lengthy bit with Barry fielding a barrage of phone calls from his sisters that will make you curl up with anxiety), the impressionistic 12-minute “Blossoms and Blood” (a gentle short film made up of alternate takes, Jeremy Blake artwork, and Jon Brion’s music), 12 Scopitones (short scenes and images set recut to music from the film), a “Mattress Man” commercial, additional artwork by Jeremy Blake, and trailers. The accompanying fold-out insert features an essay by Miranda July.