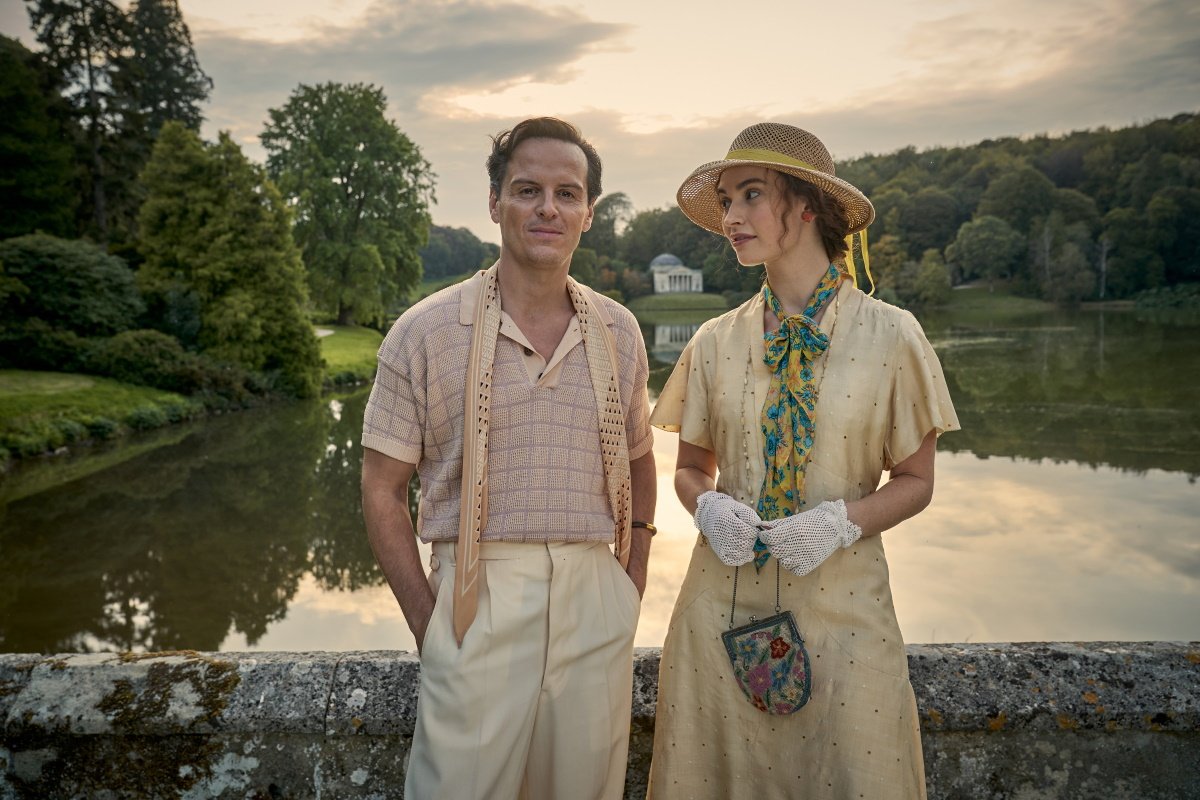 Lily James and Emily Beecham play cousins—one rebellious and vivacious, the other shy and careful—who take very different routes to love in the limited series “The Pursuit of Love“ (TV-PG). The handsomely-mounted romantic drama, set in London between two world wars, is adapted from the beloved Nancy Mitford novel and directed by Emily Mortimer, who costars with Dominic West, Dolly Wells, and Andrew Scott. The three-part series originally played on BBC. (Amazon Prime)

A serial killer swaps bodies with a high school girl in “Freaky“ (2020, R), a self-aware horror film with a twist of “Freaky Friday” and a heavy helping of dark comedy. Vince Vaughn and Kathryn Newton have a great time playing the swapped souls in unfamiliar bodies. (HBO Max)

“Resort to Love“ (2021, TV-14) stars Christina Milian as an aspiring pop star whose latest gig is singing at the tropical wedding of her ex-fiancé (Jay Pharoah). The romantic comedy costars Christiani Pitts and Alicia Keys. (Netflix)

“Jungle Cruise“ (2021, PG-13), a splashy adventure comedy inspired by a Disney theme park ride, stars Dwayne Johnson and Emily Blunt as partners on a quest through the Amazon jungle. Edgar Ramírez, Jack Whitehall, Jesse Plemons, and Paul Giamatti costar in the film, which streams at a premium price same day as theaters. (Disney+)

Emily Blunt stars in “A Quiet Place: Part II“ (2021, PG-13), the sequel to the alien invasion horror written and directed by John Krasinski. Also on DVD and at Redbox. Also new:

More true stories: “Fantastic Fungi“ (2019, TV-14) is a playful and informative look at the world of mushrooms.

International passport: the action comedy “The Last Mercenary“ (France, TV-MA, with subtitles) stars Jean-Claude Van Damme as an agent forced out of retirement to save his son.

Kate Beckinsale stars in the violent but derivative action thriller “Jolt“ (2021, R) as a woman with a rare neurological disorder that causes her to  fly into a violent destructive rage when annoyed, and goes completely ballistic when the man she loves is murdered. Stanley Tucci, Jai Courtney, and Bobby Cannavale costar.

The Danish ambassador (Ulrich Thomsen) fights the Nazis from his American post in the World War II drama “The Good Traitor“ (Denmark, 2021, not rated, with subtitles), which won three Danish Film Awards.

Hulu presents a live stream of the Lollapalooza 2021 music festival between 11am and 9pm from Friday, July 29 through Sunday, August 1.

The four-part docuseries “Dr. Death: The Undoctored Story“ (not rated) delves into the real-life story behind the dramatic series currently streaming.

The fifth and final season of the Australian medical dramedy “The Heart Guy“ (not rated) with Rodger Corser streams in its entirety.

Two adolescent boys have to rescue themselves from an abductor in the acclaimed horror film “The Boy Behind the Door“ (2020, not rated). (AMC+ / Shudder)