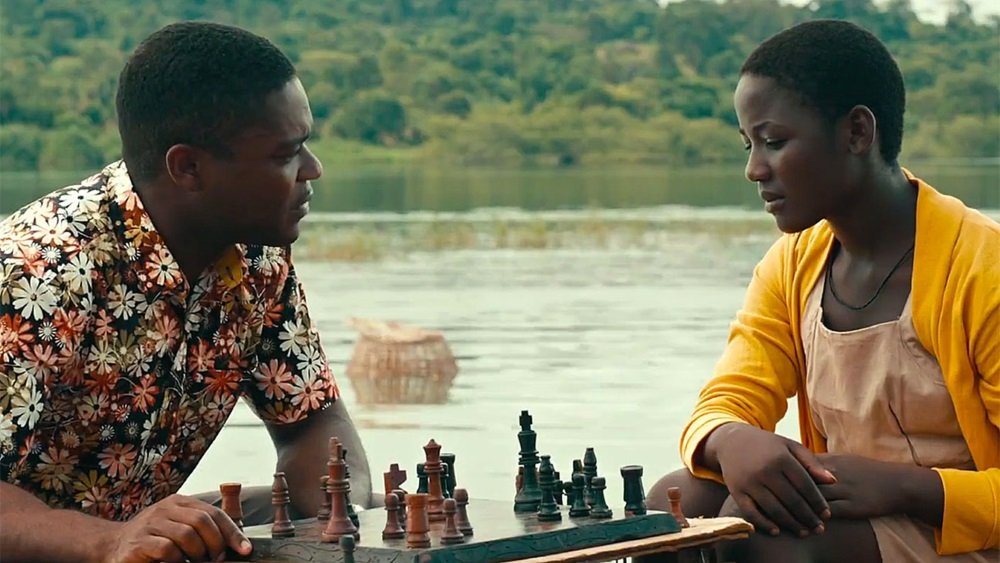 Queen of Katwe (2016) tells the true story of Phiona Mutesi, a poor, uneducated girl in Uganda who sells corn on the street of her impoverished slum until an encounter with chess offers her the possibility of something more.

Newcomer Madina Nalwanga plays Phiona, the nine-year-old daughter of single mother Nakku Harriet (Lupita Nyong’o), taking a break from street-hawking vegetables when she encounters chess at a youth center run by church outreach worker Robert Katende (David Oyelowo), an engineer hired as a soccer coach because he can’t get a job in his profession. The chess club is his idea and the kids take to it, none more than Phiona, who soon beats everyone in the group, including Robert. Encouraged by the talent of his young students and the commitment of Phiona, he campaigns to bring his kids to tournaments, where their talent is recognized by the government.

This is a Disney sports drama of underdogs triumphant, which means it is uplifting and colorful and offers few narrative challenges to the viewer; there’s little suspense as to how her story will play out, even through the inevitable setbacks. Director Mira Nair, no stranger to the struggles of poor kids in third world slums (her 1988 breakthrough film, Salaam Bombay!, presented the hardships of Bombay’s slums without blinking), leavens the harsh realities of their lives with the bright fabrics of their colorful clothing (it jumps out from the dusty streets and crumbling hovels) and the pounding drums and joyous voices of their music. That energy buoys us.

But it also tells the story of poor Ugandan citizens who struggle every day just to get enough to eat. Phiona’s odyssey is not simply one of self-confidence and commitment to learning the game. She sees the world beyond her village for the first time, and observes the affluence of players from the city and from other countries. It’s eye-opening and dispiriting at the same time and complicates her own personal development, which swings from modesty to arrogance to frustration while competing with older kids on an international level as a young provincial teen. That journey to maturity is just as interesting as her professional journey.

Queen of Katwe is hardly revolutionary but it defies one defining convention of the familiar Disney underdog/culture clash drama: it presents no white savior or mentor to be inspired by the third world / underprivileged characters as he gives them hope. Disney’s live action dramas tend to bring audience into different cultures through the eyes of a white figure, letting us learn along with him (and yes, it is almost always a man). There are no white faces in this cast of black actors. That’s not as rare as it once was, but the fact that this is still unusual for an American film makes this something of a gamble. It pays off nicely, especially in the end credits as the actors are joined by their real-life counterparts. It is a simple but powerful reminder that real people lived out the story beautified for us through film.

, iTunes, DisneyAnywhere, and other services. Availability may vary by service.
Queen Of Katwe [DVD]

The Blu-ray edition features commentary by director Mira Nair, Nair’s short film “A Fork, A Spoon, & A Knight” about the real-life Robert Katende, the three-part documentary featurette “Queen of Katwe: Their Story” (it runs about 30 minutes altogether), the short “In the Studio with Alicia Keyes,” a sing-along music video to “Back to Life,” a bonus music video directed by Nair, and 20 minutes of deleted scenes with introductions by Nair (see a deleted scene below), plus a bonus Ultraviolet Digital HD copy of the film.

Deleted scene from the Blu-ray: