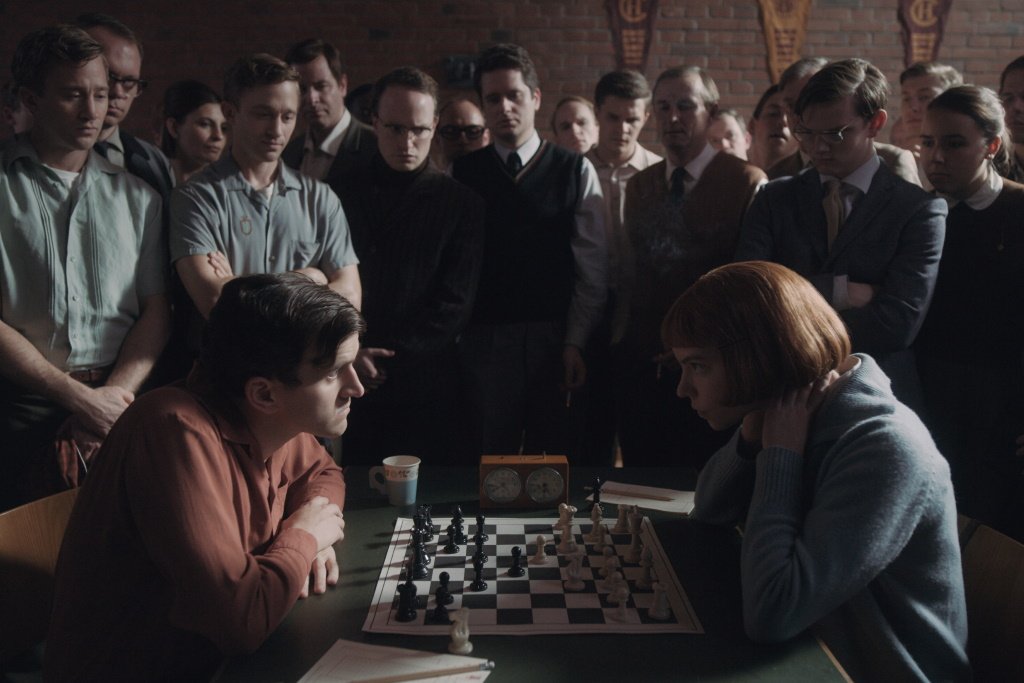 An isolated, orphaned girl in 1950s Kentucky becomes a chess prodigy and (played by Anya Taylor-Joy as an adult) battles the chauvinist world of competitive chess (as well as addiction) in the limited series “The Queen’s Gambit” (2020). Scott Frank directs and Thomas Brodie-Sangster, Bill Camp, and Harry Melling costar in the seven-part adaptation of the Walter Tevis novel. (Netflix)

Sacha Baron Cohen is back on the road as Kazakhstan’s favorite journalist in “Borat Subsequent Moviefilm” (2020, R), a satirical comedy shot in secret earlier this year with Cohen in the guise of Borat interacting with real life American citizens and political figures. For the record, the full title is “Borat Subsequent Moviefilm: Delivery of Prodigious Bribe to American Regime for Make Benefit Once Glorious Nation of Kazakhstan.” It debuts directly to Amazon Prime.

Lily James takes on the role of the young bride married to the reclusive, rich widower Maxim de Winter (Armie Hammer) in the romantic thriller “Rebecca” (2020, not rated). Previously brought to the screen by Alfred Hitchcock, This adaptation of the novel by Daphne Du Maurier costars Kristin Scott Thomas as the imperious Mrs. Danvers and is directed by Ben Wheatley. (Netflix)

Rashida Jones is a New Yorker who thinks her husband (Marlon Wayasns) is cheating on her and Bill Murray is her playboy father who teams up to tail him in “On the Rocks” (2020, R), a comedy from filmmaker Sofia Coppola. (Apple TV+)

“Fatima” (2020, PG-13), based on a true story of visions of the Virgin Mary by three young shepherds in 1917 Portugal, stars Joaquim de Almeida, Goran Visnjic, and Harvey Keitel.

A three-year-old boy guides his parents on a fantasy quest in “The Place of No Words” (2020, not rated), an experimental drama from actor/director Mark Webber. Also new:

A young Chinese girl seeks out the Moon goddess in the animated feature “Over the Moon” (China/US, 2020, PG), directed by veteran Disney animators Glen Keane and John Kahrs and featuring the voices of John Cho, Sandra Oh, and “Hamilton” star Phillipa Soo.

Streaming TV: The new season of “My Next Guest Needs No Introduction with David Letterman” (TV-MA) features interviews with Dave Chappelle and Robert Downey Jr..

International passport: Germanic warriors confront the Roman Empire in “Barbarians: Season 1” (Germany, not rated, with subtitles), a lavish historical drama set at the Battle of the Teutoburg Forest in 9 A.D. Also new:

Halloween spirits: a family visiting a hotel finds the guest disappearing in “Cadaver” (Norway, 2020, not rated, with subtitles), a psychological horror film set in the aftermath of a nuclear disaster. For kids there is the spooky comedy “ParaNorman” (2012, PG), a stop-motion animation film about a boy who can speak with the dead.

“Cyrano, My Love” (France, 2019, R, with subtitles) gives the “Shakespeare in Love” treatment to playwright Edmond Rostand and the creation of his classic “Cyrano de Bergerac. (Amazon Prime and Hulu)

A woman (Elle Loraine) battles a hair weave that has a dangerous life of its own in the hip hop horror film “Bad Hair” (2020, TV-MA) from “Dear White People” filmmaker Justin Simien.

True stories: Alex Gibey’s “Totally Under Control” (2020, not rated) investigates the failed American response to the Covid-19 pandemic. It streams a week its after VOD release.

Hulu also offers the premiere episodes of the new seasons of “Black-ish,” “The Conners,” “The Golbergs,” and “The Voice” and the series premieres of “Card Sharks” and “Supermarket Sweeps” a day after their respective network TV showings.

“537 Votes” (2020, TV-MA) reexamines the politics behind the Florida recount and the contested 2000 presidential election. (All HBO platforms)

A Syrian refugee and a mysterious woman fall in love in rural Sweden in the indie drama “Ghabe” (Sweden, 2020, not rated, with subtitles). (Peacock)

Collections of films by filmmaker and gay-rights activist Marlon Riggs, including “Tongues Untied” (1989, not rated) and “Black Is . . . Black Ain’t” (1994, not rated), and films “Inspired by Marlon Riggs” are featured this week.

In a completely different vein is a selection of five features from the “Women Filmmakers of New World Pictures,” from Stephanie Rothman’s “The Student Nurses” (1970, R) to Penelope Spheeris’ “Suburbia” (1983, R).