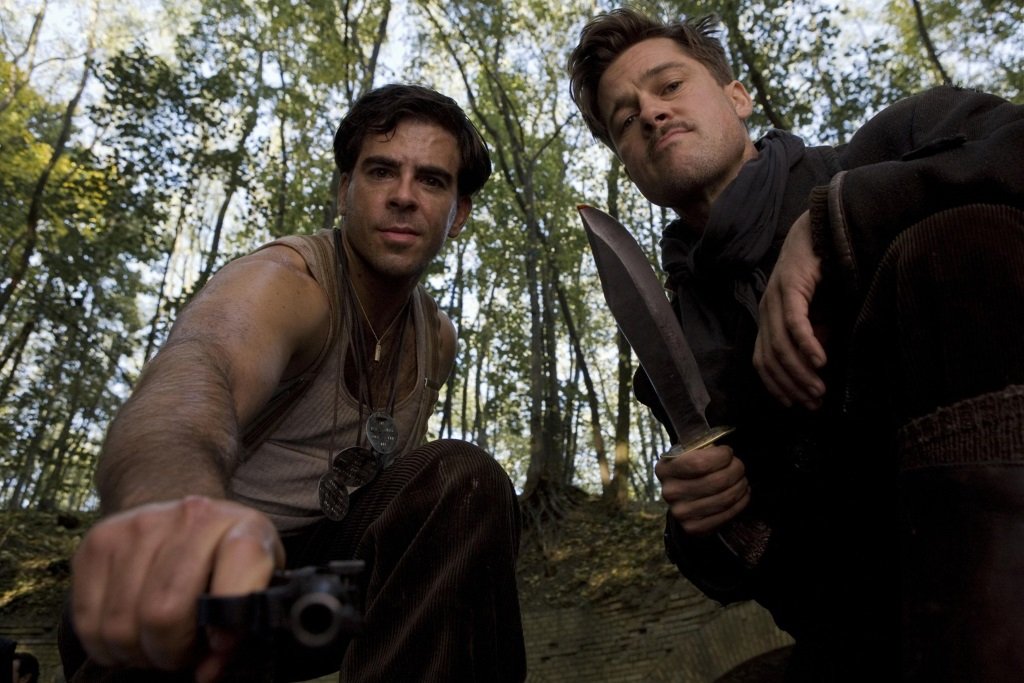 Is there another American filmmaker who takes such joy in telling stories and spinning cinematic spells as Quentin Tarantino? I don’t mean tackling big issues or making epic statements. I’m talking about the sheer pleasure of telling audiences a tale that takes them places they don’t expect and ways they haven’t quite experienced before. The directors who try to ape Tarantino’s quirky scripts and movie lore-loaded direction miss the point. His love of movies comes out not simply in his references to other films. It’s all in the way he digests the ideas and images and music and narrative points he’s stored during a life of moviegoing and reimagines them in new contexts, reworking them until they become an organic part of his movie.

Inglourious Basterds (2009) (yes, that is the spelling) takes its name from an Italian war caper but the story is pure Tarantino, a mix of pulp fantasy, genre play, and narrative tropes resurrected with fresh takes and twists, all deliciously scripted into dialogue dances and verbal jousts and set against a historical informed more by the movies and Tarantino’s own “what if?” narrative doodling than any historical record. “Once Upon a Time… in occupied France,” reads the opening chapter title, which is as good a cue as any to Tarantino’s intentions. This isn’t any World War II history you learned. Tarantino has rewritten the end of the war as a magnificent Hollywood mission movie, creating a revenge fantasy not so much come to life as bigger than life.

Brad Pitt gets top billing as Aldo Raine, a Tennessee platoon leader with a drawl like molasses spiked with moonshine and a squad of Jewish American soldiers on a mission in occupied France to “to kill Nat-sees.” But the movie belongs as much to Melanie Laurent’s Shosanna Dreyfus, a French Jew who escapes the SS and creates a new identity running (what else?) a movie theater in Paris, and Christoph Waltz’s cool, cultured, deliciously devious SS officer Col. Hans Landa, aka “The Jew Hunter.” Their fates are intertwined from the opening chapter to the closing, but Tarantino isn’t so obvious as to deliver the expected poetic justice. His is most unexpected and all the more entertaining for it.

Tarantino has become a more cinematically attentive director through the years. He sweeps up audiences in elegantly choreographed sequences of performers in complex formations, gliding cameras and dramatic musical choices and he creates some of the most hauntingly beautiful and terrible images I’ve seen on the screen in the chaos of the climax: orange and yellow flames devouring the black-and-white image on a theater screen, the image reforming on the billowing smoke like a phantom cackling over the destruction.

Mostly, though, Tarantino is a damnably good screenwriter, a man who loves dialogue and the action of shifting positions of power as knowledge is exchanged in conversations that are rarely about what is being said, and he offers opportunities for dynamic performances and deft byplay with his writing. Christoph Waltz creates a character of daunting confidence in Landa, a man who leaves threats implied under rituals of manners and deference, an elaborate show of power communicated by his control of every situation. Pitt is more of a caricature, grinning his way through the film with a perpetual squint and a clenched jaw. Diane Kruger plays German movie star and double agent Bridget von Hammersmark as an absolutely fabulous celebrity whose flamboyance is part of her cover, Laurent is hard and fierce as Shosanna, turning her fears into ferocious anger, and Michael Fassbender a crisply profession British officer with grit under his old chap joviality.

This is a fantasy of a war movie, a dark revenge fantasy where the bad guys put on a front of cultured sophistication and good manners, the good guys commit barbaric acts, the heroes don’t always get out alive and the historical record is thrown out the window in a brazen blast so audacious and impertinent it defies all reason. Which is part of the fun. Tarantino isn’t about saving Private Ryan. He’s having too much fun concocting the ultimate war movie/caper/thriller.

It was nominated for eight Academy Awards, including best picture, best direction, and best original screenplay, and won an Oscar for Christoph Waltz’s supporting performance. Waltz also won an acting prize at the Cannes Film Festival and the Golden Globes.

The Blu-ray and DVD releases skip the usual commentary track and traditional making-of documentary for a more eclectic collection of supplements, including all six minutes (credits included) of the film-within-a-film “Nation’s Pride” and three illuminating deleted/extended scenes. The highlight of the “2-Disc Special Edition” DVD and Blu-ray editions is 30-minute video interview with Quentin Tarantino and Brad Pitt (conducted by Elvis Mitchell) that brings out a calmer (yet still enthusiastic) QT to discuss the creative ideas behind his film, with Pitt in full support of his vision and his collaborative engagement with actors. Mitchell also narrates a tour through the film poster and film history in Tarantino’s movie. The rest are of the supplements are just grace notes: a relaxed interview with actor Rod Taylor, a tribute to “The Original Inglorious Bastards,” a mock-featurette on “The Making of Nation’s Pride” and montages showing the playfulness of QT and his cast and crew on the set. Both deluxe editions include a digital copy of the film for portable media players.