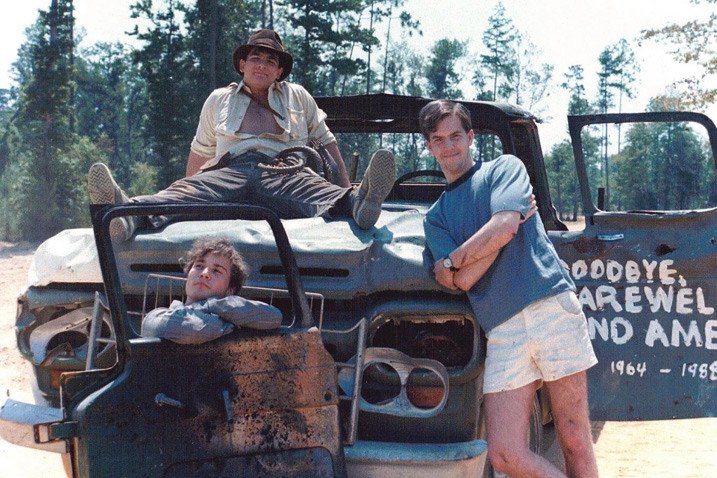 Raiders! The Story of the Greatest Fan Film Ever Made (2016) – The legend is true. In 1982, 12-year-old friends Chris Strompolos, Eric Zala, and Jayson Lamb started shooting a shot-for-shot remake of Raiders of the Lost Ark on a borrowed VHS camcorder in their small Mississippi town. Chris played Indiana Jones, Eric directed and played Belloq, and Jayson manned the camera, edited the footage, and brainstormed the special effects. They spent every summer vacation for seven years completing the film (every scene but one, more on that later), by which time they weren’t even speaking to one another. Completed in 1989, with a single public screening for friends and family, it was practically forgotten until VHS copies started making their way to film buffs and movie collectors in the late 1990s. Filmmaker Eli Roth brought a copy for an unannounced screening at the 2002 Butt-Numb-a-Thon film festival and the underground legend exploded. Even Spielberg is a fan.

You can’t buy or stream a copy of Raiders of the Lost Ark: The Adaptation. The film was never meant to be seen outside of the friends who made it. Chris and Eric (who have since patched up their differences and reconnected) have screened their fan film in special one-off showings around the county but it can’t be shown commercially. It’s not like the 12-year-old filmmakers thought to get a waiver from the creators of the original film.

So Raiders! The Story of the Greatest Fan Film Ever Made, directed by Jeremy Coon and Tim Skousen and inspired by the book by Alan Eisenstock, will be the closest most people will get to that astounding piece of DIY spectacle. As a work of documentary filmmaking it is perfectly adequate to the task. It features interviews with the Chris, Eric, Jayson, their parents (God bless the mothers of these kids who believed in their dreams, even if they worried about their methods), and other members of the cast and crew, who have been tracked down by the filmmakers. Eli Roth and Harry Knowles extol the film and John Rhys-Davies (the only participant in the original Raiders of the Lost Ark interviewed for the doc) praises the gumption of these kids. And it has a catchy hook. “They completed every scene… except one,” reads the opening credits, and Coon and Skousen document the efforts of Chris Strompolos and Eric Zala to shoot that final scene, which involves a fight under a moving airplane, a machine gun, a spinning propeller, and a decapitation. It turns out to be just as dangerous an undertaking as anything they did as kids.

But what makes the documentary worth seeing is the collection of clips from the original production, and especially the outtakes. Those takes that didn’t make it to the film show not only the spirit of the endeavor but the potentially life-threatening situations the boys put themselves through to get the shot. On the one hand it’s enough to make you wonder where the parents were in all this. On the other, it might remind you a little of your own childhood antics. And for all reckless, dangerous, and ill-considered stuff many of us did before puberty, how much of that was dedicated to the creation of art?

Extra credit: that final scene that they shot as adults, glimpsed in the closing credits of the documentary, can be seen in its entirety at www.raidersguys.com.

Add to My Stuff on Hulu or stream free on Kanopy, which is available through most public and college library systems.

, iTunes, GooglePlay, Fandango, Vudu and/or other services. Availability may vary by service.
Raiders! The Story of the Greatest Fan Film Ever Made [Blu-Ray + DVD + Digital Copy]