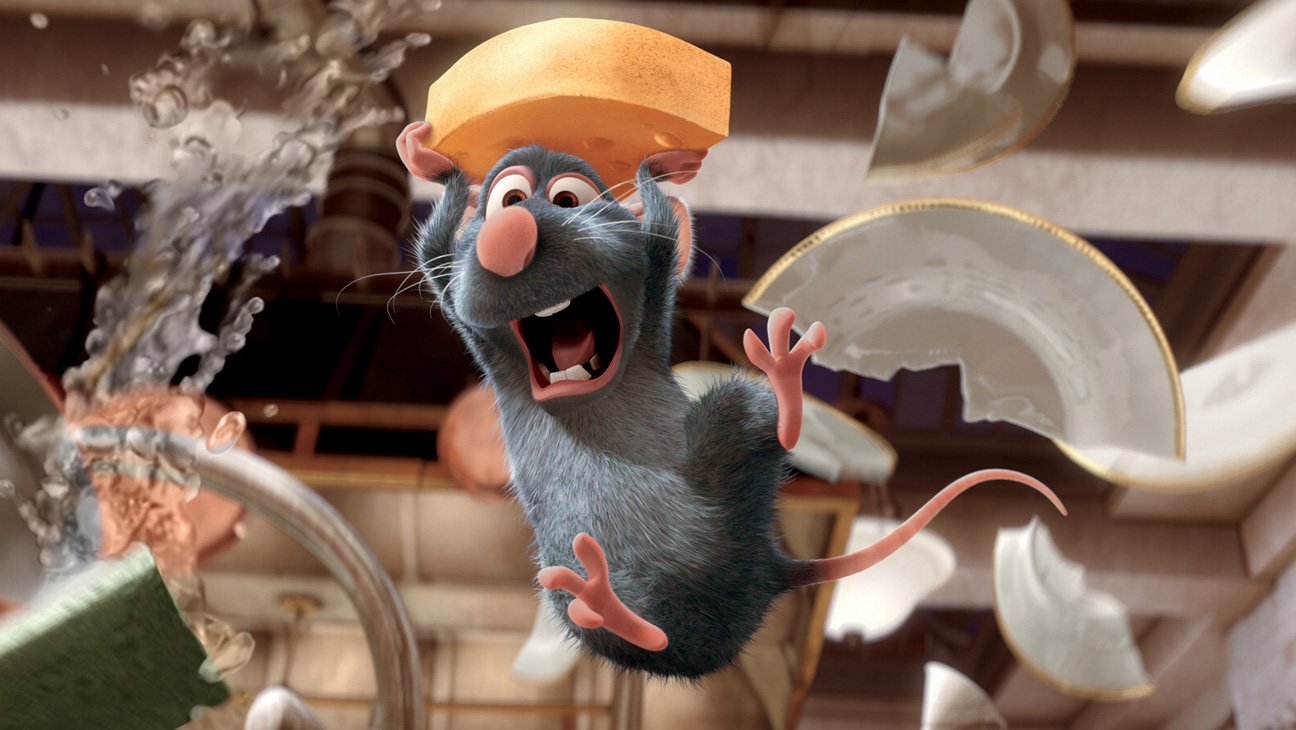 “I’m a rat, which makes life hard.” That’s an understatement.

In Ratatouille (2007), the dynamic animated film from writer/director Brad Bird (The Iron Giant and The Incredibles) and Pixar Studios, Remy (voiced by Patton Oswalt) may be a rat but he’s also a budding gourmand. Where his family is content to raid trash cans and scarf down anything that isn’t laced with poison, Remy has a highly developed sense of smell and a passion to explore the world of taste and flavor. So he leaves the dumpster diving to whip up gastronomical delights in the kitchen of revered Parisian restaurant – hidden under the cap of a bumbling kitchen boy (Lou Romano).

That may not sound like a recipe for success, but it is a treat filled with delights for audiences young and old. Bird adds his own personality to a script that takes unexpected turns and finds its happy ending in personal satisfaction, not public triumph while creating a visual delight.

In this animated Paris of old world character and new world color, Remy cooks up a storm by steering his human partner in cuisine like a life-sized marionette in a comic dance full of grace and joy behind the elastic slapstick and kinetic physical humor. Peter O’Toole, in his most arrogant and withering tones, marches into the film like death himself as imperious and jaded food critic Anton Ego and reminds us that we can all still have our souls touched.

At almost two hours, Ratatouille is long for an animated feature and may be too complex for very young children, but lively direction will keep them entertained while the surprisingly sophisticated story reaches the child in the rest of us. Like the French peasant stew for which it is named, Ratatouille isn’t a fancy dish, but it’s hearty and tasty, created from fresh ingredients and cooked up with unexpected flavors and dashes of spice, and it leaves a satisfying and inspiring warmth when it’s done.

It was nominated for five Academy Awards (including its original screenplay) and won for the best animated feature of 2008.

The Blu-ray and DVD editions include the 14-minutes featurette “Fine Food and Film: A Conversation with Brad Bird and Thomas Keller,” which compares and contrasts the inspirations and philosophies of director Brad Bird and acclaimed chef Thomas Keller. The three deleted scenes were removed before they were animated and are presented in the sketchy form of an animated storyboard and accompanied by interview segments with the director explaining his reasons for cutting the sequence. Both are family friendly without speaking down to kids. Also features the very funny animated short “Lifted,” an Oscar nominated alien abduction spoof that originally played in theaters in front of the film, and the new featurette “Your Friend the Rat,” a lively little animated short about the rodent kingdom, hosted by Remy and his brother Emile.