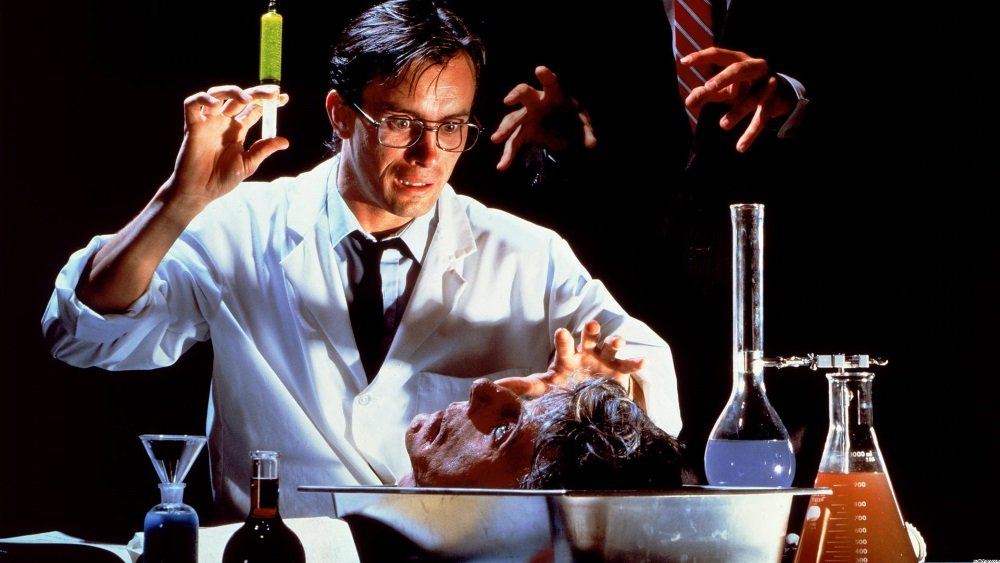 Bruce Abbot is ostensibly the hero, a nice-guy medical graduate student in love with the dean’s daughter (the frequently naked Barbara Crampton), but Jeffrey Combs steals the film as Abbott’s humorless roommate, medical rebel Herbert West. Brow furrowed in a state of perpetual intensity, West is perfecting the answer to life after death but it’s still a work in progress. His resurrected “patients” have a tendency to revive as brain damaged zombies, though he has no such luck when it comes to his arrogant nemesis, a scheming surgeon played by a cadaverous David Gale who doesn’t let something as simple as losing his noggin stop his appetite for attention (“Who’d believe you, a talking head? Get a job in a side-show!”).

Full of black humor and startling shocks, the feature film debut of experimental theater director Gordon is arguably his best and easily his most fun (a kinky, sick sort of fun, mind you) and the unrated version (which is, oddly enough, notably shorter than the padded R-rated cut but also tighter) has arguably the most freakiest sex horror scene ever suggested on film.

Netflix has the 85 minute unrated version. Queue it up!

and other services and on DVD and Blu-ray in excellent special editions:
Re-Animator [DVD]