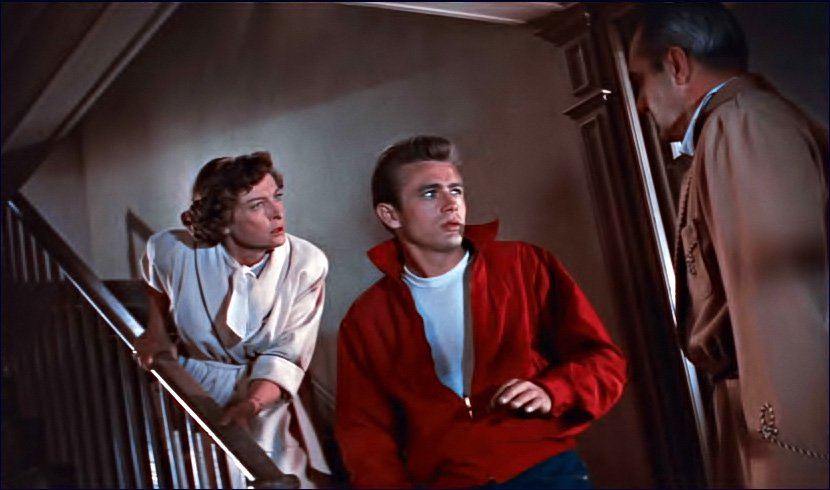 Before the 1950s, there were no teenagers in the movies, at least not as such. There were adults and children, and that awkward age in between was largely seen as, well, that awkward period in between. You had kids on the cusp, troubled young adults, and juvenile delinquents, but the teenager, with his / her hormonal surges and anxieties and identity crises, was pretty much ignored.

In many ways, James Dean was the first American teenager, the screen embodiment of the strangled cry of inarticulate kids too old be considered children but unready for the adult world. Nicholas Ray’s powerful, profound Rebel Without a Cause (1955) is the ultimate expression of teen alienation in an adult world of its era. Ray’s amazing use of widescreen and color creates a visual dimension to the explosion of tempestuous emotions, and Dean’s wound-up performances and stumbling delivery perfectly captures the flailing desperation of an adolescent searching for a role model. He becomes the modern youthful embodiment of Ray’s tough but vulnerable outsider/outlaw, just looking for a way to fit in. Sixty years later it’s just as affecting.

Natalie Wood broke out of ingénue roles as the troubled “bad girl” next door and Sal Mineo is heartbreaking as the abandoned boy who finds a big brother and best friend in Dean. All three young actors earned Academy Award nominations. Jim Backus is Dean’s glad-handing but ineffectual father and Corey Allen, Ann Doran, William Hopper, and Dennis Hopper co-star.

It was nominated for three Academy Awards, for actors Natalie Wood and Sal Mineo and for Nicholas Ray for “Best Writing, Motion Picture Story,” and was added to the National Film Registry in 1990.

, iTunes, GooglePlay, Fandango, Vudu and/or other services. Availability may vary by service.
Rebel Without a Cause (Blu-ray)

Rebel Without a Cause: Special Edition (DVD)

The special edition Blu-ray and DVD editions from Warner Home Video feature commentary by Douglas L. Rathgeb (author of “The Making of Rebel Without a Cause”), the excellent documentary Rebel Without a Cause: Defiant Innocents featuring interviews with the astoundingly articulate screenwriter Stewart Stern and actors who played the kids in Buzz’s gang, the vintage 65-minute made-for-TV seventies-era special James Dean Remembered (hosted by Peter Lawford and featuring interviews with Rebel co-stars Natalie Wood and Sal Mineo and others), additional scenes (without sound), rare studio screen tests and wardrobe tests, three segments from the vintage TV series Warner Bros. Presents and a new interview featurette Dennis Hopper: Memories from the Warner Lot, featuring interviews conducted with Hopper not long before his death, debuting on this disc.

Exclusive to the seven-disc box set James Dean Ultimate Collector’s Edition is a set of three DVDs with original documentaries: the 2005 James Dean Forever Young (narrated by Martin Sheen), the American Masters documentary James Dean Sense Memories from 2005, and the 1984 documentary George Stevens: A Filmmaker’s Journey, a portrait of the director and his career, rich with film clips and interview with the stars and artists he worked with over his 40-year career, directed by George Stevens Jr.

All seven discs are in a single fold-out digipack in a substantial box that also includes a 48-page photo book, a collection of 7 ½ x 10 inch reproductions of behind-the-scenes photos, reproductions of studio memos from East of Eden and Rebel Without a Cause and three mini-reproductions of the original posters.