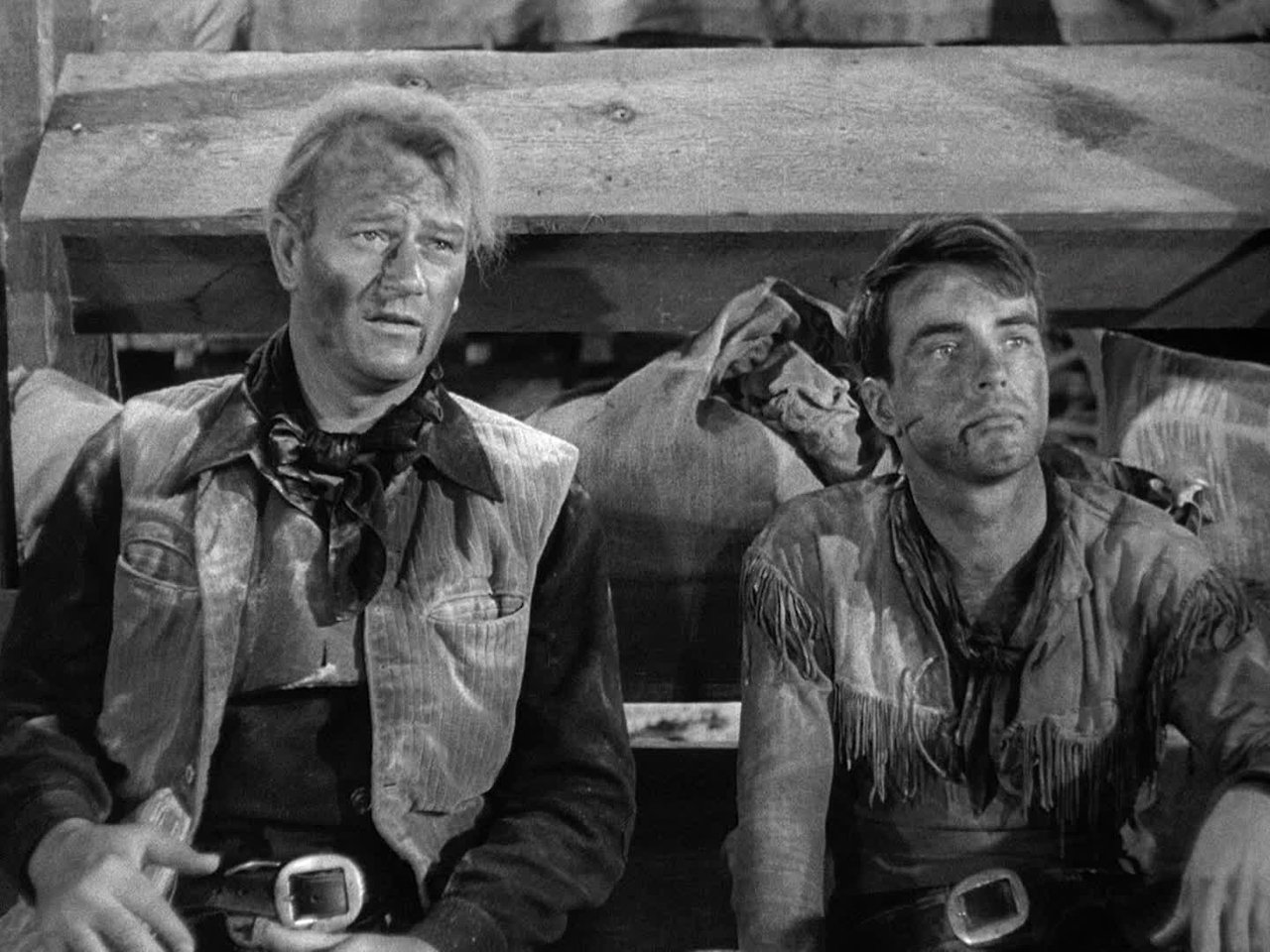 Howard Hawks reworks Mutiny on the Bounty as a frontier epic in Red River (1948), the sweeping tale of a journey that can’t be made and the story of a son forced to battle the father he loves and adores.

Montgomery Clift made his film debut opposite grand old icon John Wayne, playing Matthew Garth, the adopted son of the self-made cattle baron Tom Dunston. They are loyal and inseparable, at least until the trials of a grueling cattle drive across thousands of miles of inhospitable desert turns the old man into a brutal despot and the young son defies him to save the herd and his men.

The opposition of acting styles is electric: laconic elder statesman Wayne wearing his character like buckskin, dominating the screen as upstart method actor Clift’s intensity burns a star right next to him. Hawks’ style leans more to Wayne: measured and easy-going, he seems to let the characters take the story along with them, but behind that easy pace is a tale of madness, betrayal and vengeance that heats to a simmer under the sun of the parched prairie.

“I never knew the big sonofabitch could act,” remarked Ford upon seeing Wayne’s performance, and he started casting Wayne in more complex and mature roles. But Clift was the real revelation and his internalized, psychologically-driven approach arguably pushed Wayne to reach for colors he’d never brought to a role before. The release was delayed while Hawks fought a legal battle with Howard Hughes, who claimed the film was similar to his own The Outlaw. Hughes lost but in the meantime Clift made The Search, which beat Red River to theaters and earned Clift his first Oscar nomination.

Walter Brennan defines the cliché of the sourdough old frontier coot as Groot, manning the chuck wagon and growling out folk wisdom as the conscience of Dunston, Joanne Dru is the tough wagon train settler who falls for Matt, and John Ireland is gunman Cherry Valance, who joins the cattle drive and enters a friendly rivalry with Matt. You’ll also see a lot of familiar faces from classic westerns and other golden age Hollywood films among the cowhands, among them Noah Beery Jr., Harry Carey Jr., Hank Warden, and Paul Fix, and Harry Carey Sr. plays the cattle agent.

It was nominated for two Academy Awards, including one for Borden Chase’s original story, and the film was added to the National Film Registry in 1990.

Add to My List on Paramount+ or to My List on MGM+ or stream free on Hoopla, which is available thorugh most public and college library systems.

Also available on DVD and Blu-ray in a deluxe Criterion edition and on SVOD through Amazon Video, iTunes, GooglePlay and/or other services. Availability may vary by service.
Red River (Criterion Collection) [Blu-ray + DVD]

There are two versions of Red River and the longer pre-release version, which features “diary pages” of exposition between scenes and minute or two of additional footage, has been the version on previous home video releases. Hawks himself has said that he prefers the theatrical release, which runs 127 minutes (six minutes shorter than the pre-release cut) and features Walter Brennan narrating in place of the journal pages, and Criterion features a new 4K digital restoration of this version as well as a 2K restoration of the longer cut on both Blu-ray and DVD.

The four-disc combo release includes both films on Blu-ray and DVD plus new video interviews with Peter Bogdanovich (discussing the differences between the two cuts) and historian Lee Clark Mitchell (on the history of the western novel and the film’s debt to the literary tradition) and a video essay by Molly Haskell. Archival supplements include audio excerpts from Bogdanovich’s 1972 interview with Hawks and an interview with novelist and screenwriter Borden Chase. There’s a booklet featuring a new essay by Geoffrey O’Brien and a 1991 interview with Hawks’s longtime editor Christian Nyby, plus a new paperback edition of Chase’s original novel, previously out of print.

Also available on a movie-only edition from MGM Home Video.