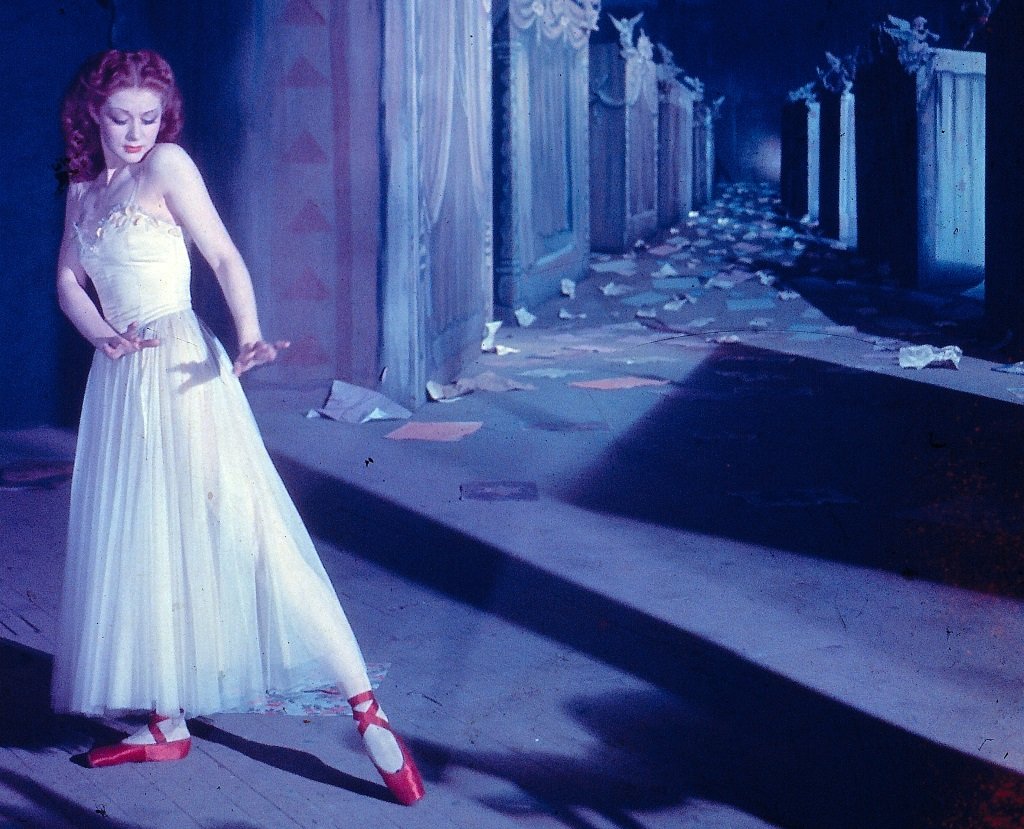 Michael Powell and Emeric Pressberger’s The Red Shoes (1948) has been called the greatest ballet film ever made. To girls of a certain age and a predisposition to the romance and beauty of ballet, this film is a touchstone that remains an impassioned favorite long after their invitation to the dance is over. To me, it’s a film of dark fantasy, romantic passion and an infectious love of dance, music and cinema. The dance sequences are among the most beautiful put on film, stage ballet transformed into cinematic experience, but the drama behind the curtain is even more interesting.

The Red Shoes is the story of dedicated young ballerina Vicky (Moira Shearer) who is elevated to world renown after taking her first lead in the titular ballet, only to become torn between two men: the demanding ballet mentor Lermentov (Anton Walbrook), who accepts nothing less than total commitment to the company, and the ambitious and frankly arrogant young composer Julian (Marius Goring), which whom she falls in love. And while that’s not incorrect, the film is equally weighted to all three stories, and all three characters, in the film: each an artist striving to create their best work.

The opening is pure Powell: students charging the balcony of the ballet hall to get the best seats with unselfconscious rambunctiousness. The jocular talk and horseplay soon turns serious, though not out of respect for the ballet. The students, and Julian (Marius Goring) in particular, are there for the music composed by their professor and Julian is distressed, hurt, and most of all disappointed to realize that his beloved professor stole his work. The playfulness gives way to seriousness, and with it the film leaves the easygoing world of students for the demanding world of professionals

The grand ballets are lovingly designed and presented with great cinematic invention, filmed like a narrative through choreography and gesture and color and texture, with all the integrity of a great movie musical sequence. Yet there is as much loving detail to the small, provincial stages (where a mounted fan provides what little circulation and records on Victrolas provide the music) and run-down rehearsal rooms where the hard work is done in advance of the spotlight. It is this drama on the way up to stardom, and behind the curtain in preparation for a production, that engages the viewer: the physical and creative effort put in to creating a ballet, to making art. Powell makes a point of showing just how many people, working at the top of their game, it takes to create the pieces that must be brought together by producer Lermontov. While they necessarily focus on their work almost to the exclusion of every other aspect of the whole, often refusing to compromise their vision for the good of the whole, and it takes Lermontov to negotiate the union and bring it all together. Like a conductor. Or a film director.

As Vicky rises through the company, so does Julian, and they finally meet 50 minutes into the film, in the very scene in Monte Carlo where they are both promoted by Lermontov: he to composing the new ballet score “The Red Shoes” from top to bottom, she to lead dancer. And as the driven but aged and lonely Lermontov sees a kindred a kindred soul in Vicky, she starts to fall for the dashing Julian. The tragedy of the film is that the two men in Vicky’s life demand that she choose between dance and love.

But I think Powell sees Lermontov as the tragic figure, a man who has all his rejected human love for love of art, and dedicated his life to creating art. Though often shown imperious and cold in his relations, Walbrook reveals a vulnerability in his eyes and a heartbreak upon his face. Julian offers something Lermontov cannot, or at least has not: physical affection. But apart from a few scenes of courtship rituals, we’re shown little deep affection between the two, and none of the adoration in Julian’s eyes that Lermontov exhibits. Powell has a complicated history with his female stars, often falling in love (and having affairs) with them and expressing his adoration through the cinema, building them up into the beautiful stars of his films. That Lermontov shows his love by making her a greater artist—the one thing that Julian cannot or will not do—is, in Powell’s eyes, the greatest proof of all.

It was nominated for five Oscars (including Best Picture and Best Motion Picture Story, a category that no longer exists) and it won two, for Best Art Direction-Set Decoration, Color and Best Music, Scoring of a Dramatic or Comedy Picture (hard to believe that Jack Cardiff did not get a nomination for his magnificent cinematography).

In 2009, with the support of Martin Scorsese and The Film Foundation, The Red Shoes was restored from scratch and the print premiered at the 2009 Cannes Film Festival.

, iTunes, GooglePlay and/or other services. Availability may vary by service.
The Red Shoes (The Criterion Collection) [Blu-ray]

The Criterion DVD and Blu-ray editions present the 2009 restoration by UCLA and The Film Foundation, supervised by Robert Gitt, the engineers returned to the original (but deteriorated) three-strip Technicolor negatives and rebuilt the film from scratch with the help of archival prints and other materials for reference. Gitt describes the process in a short essay in the accompanying booklet, and Scorsese narrates a new four-minute featurette illustrating the damage to the original elements and comparing it to digital restoration. The exactness of the restoration and the details of the Blu-ray shows up the weaknesses of the optical effects in one sequence of the ballet, but the rest of the spectacle is so absorbing you barely notice the ambition of the special effects, only the resulting magic of the imagery. The color is not to be believed. In the right creative hands, three-strip Technicolor could offer a magical lushness that was like a dream of reality, the kind of color that the cinema hasn’t seen in decades, and this is one of the great showcases.

The Criterion special edition includes the 25-minute documentary “Profile of The Red Shoes” from 2000 (dutiful but not particularly enlightening) and a 2009 interview with Thelma Schoonmaker Powell (Scorsese’s editor and Powell’s widow). The disc also features the previous supplements: commentary by film historian/Scorsese authority Ian Christie featuring interviews with stars Marius Goring and Moira Shearer, cinematographer Jack Cardiff, composer Brian Easdale, and filmmaker Martin Scorsese, galleries of stills and memorabilia and Jeremy Irons reading excerpts from Powell and Pressburger’s novelization of The Red Shoes, plus a booklet with an essay by Christie.