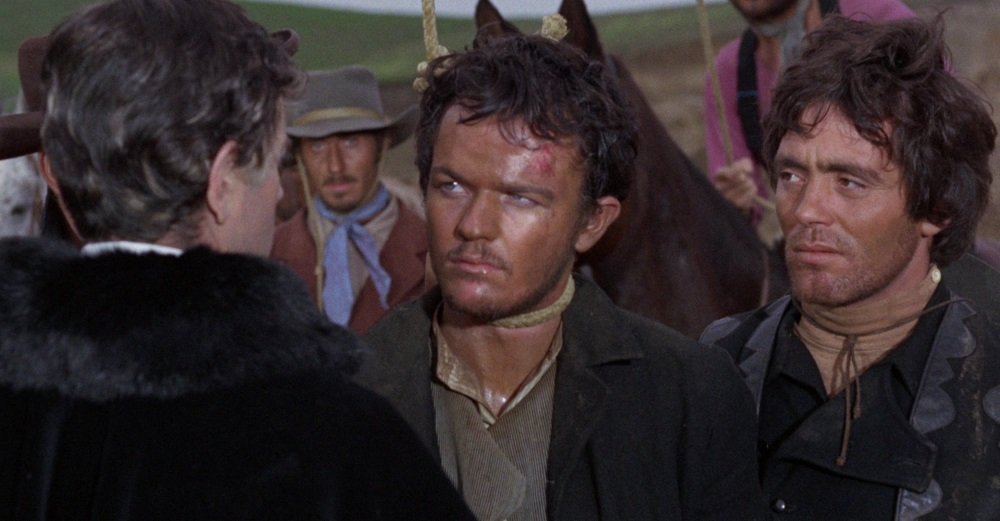 Requiescant (Italy, 1967) is a revolutionary allegory in a spaghetti western, a genre that proved to be fertile ground for socio-political commentary such filmmakers as Sergio Solima (Face to Face, 1967) and Damiano Damiani (A Bullet for the General, 1966). In a 2010 interview, filmmaker Carlo Lizzani remarked that the Italian government used the leverage of state funding and tax breaks to steer filmmakers away from political material: “It was easy for the Ministry to distract us without directly saying that it was not possible to make this topic.” With a genre film, you could smuggle messages in between the shootouts and double-crosses and sadistic, predatory villains.

Lou Castel, fresh from establishing his angry young man credentials in Marco Bellocchio’s Fists in the Pocket (1965), stars as a holy innocent on the frontier who inadvertently discovers an innate gift for gunplay. He’s given the name Requiescant after giving the last rites (in Latin) to the outlaws he inadvertently shoots out of the saddle: “requiescant en pace.” But despite a name that rings with both death and afterlife, Requiescant is an innocent, raised by a travelling preacher as a dutiful son and servant of God, and he’s driven by a sense of justice and duty that sends him in search of his runaway adoptive sister. He finds her in the most corrupt town in the spaghetti west, which just happens to be run by the former American officer who made him an orphan. American actor Mark Damon plays the former officer as a pale, half-dead aristocrat who could have arrived from the Gothic horror films he once starred in, a vampire feasting on the blood and wealth of the Mexican peasants whose land he stole.

Director Carlo Lizzano worked his way up as a screenwriter, contributing to the scripts for Rossellini’s searing Germany Year Zero (1948) and Giuseppe De Santis’s Bitter Rice (1949), both films run through with social commentary. He directed short documentaries before making his first feature and returned to documentaries at the end of his career, making films about the great Italian directors he knew and admired: Luchino Visconti, Roberto Rossellini, Giuseppe De Santis. Between these poles, Lizzano had a thriving career making genre films—westerns, crime thrillers, war dramas—in the 1960s and 1970s. It was more than simply a matter of necessity. He loved genre pictures. They were also a superb vehicle for smuggling political commentary into popular cinema. It was a good fit for a filmmaker with an affinity for rebels and outlaws.

As far as Lizzani was concerned, Requiescant was no abstract allegory. He was inspired by Italy’s own history of disenfranchisement of the poor in the south of Italy. In Requiescant, he explains, “it was particularly highlighted between the workers and the rich, mean, violent landowners. And this evoked a season that we had lived through. The conflict between landowners, especially those in the Italian Mezzogiorno, and the poor framers had resulted in plenty of blood being spilled.” Thanks to the power of spaghetti western conventions, you don’t need to know the history to get the message, and you don’t need to embrace the message to appreciate the brutal justice.

The revenge drama is set against a backdrop of colonial occupation and racism. Mexican peasants (as played by Spanish and Italian extras) have long been the oppressed and disenfranchised of the spaghetti west but rarely more than background players and nameless victims. Lizzani and his screenwriters bring that institutional suppression into the foreground; every Mexican in town is either a servant, a manual laborer, or an impoverished peasant. Requiescant sees no racial difference—no surprise for a devout, idealistic Mexican raised by a white family as one of their own—but every white citizen instantly pegs him as part of that underclass. The oppressed, however, are about to rise up behind Requiescant. Their stone-faced leader, a revolutionary priest who funds the resistance by looting the corpses produced by this violent town, is played by none other than Pier Paolo Pasolini, who co-wrote and co-starred in Lizzani’s The Hunchback of Rome (1960), with sly, understated gallows humor. We can assume he approved of Lizzani’s transformation of the bloody spaghetti western into a proletariat revolution in miniature.

Arrow presents a new 2K restoration of the film from the original camera negative with both the original Italian and English dub soundtracks. Features the new video interview featurette “Remembering Requiescant” with Lou Castel, an archival interview with producer/director Carlo Lizzani, and the original Italian trailer, plus a booklet with booklet featuring an essay by Pasquale Iannone.