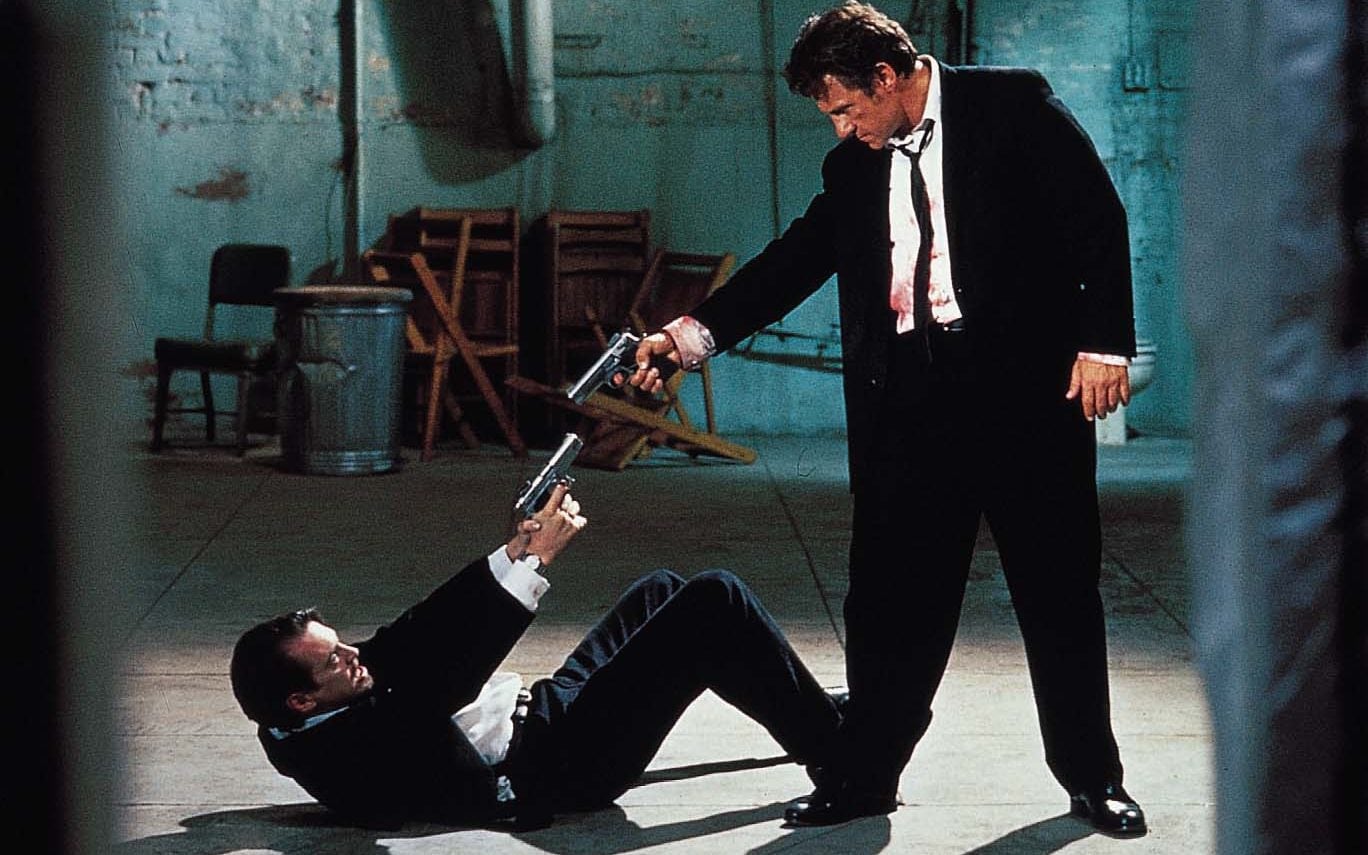 Reservoir Dogs (1992), Quentin Tarantino’s quotable blast of post-modern crime movie cool, is one of the most attention grabbing directorial debuts in history.

Harvey Keitel, Tim Roth, Michael Madsen, and Steve Buscemi—all dressed in identical black suits with thin ties and dark glasses—are gangsters who regroup in an empty warehouse in the aftermath of jewel heist gone bad that left two dead and one of them bleeding his life away through the gut. What happened?

It’s a bloody, brutal movie, with blithely racist and sexist characters who are both the heroes and the villains of the piece and sharp, vivid dialogue, and Tarantino plays with the conventions of the crime movie with his character collisions and non-linear storytelling. The film jumps back in time to show how the major characters were drafted into the heist crew by gangster Joe Cabot (Lawrence Tierney) and his son Nice Guy Eddie (Chris Penn), why they were given code names for the job, and how they got away (or didn’t) when the alarms sounded and the cops arrived.

What Tarantino doesn’t show, against all expectations, is the robbery itself, usually the highlight of any heist film. For Tarantino, it’s all about the characters, the chaos, the relationships under pressure, and of course the delicious dialogue, strewn with entertaining asides, entertaining stories, and gallows humor. He’s having too much fun in the pulp world of its tough guys to scratch beneath the surface of romantic gangster tropes.

The key word, however, is fun. Tarantino lifts ideas from dozens of movies (the plot itself is an ingenious rethinking of the Hong Kong crime classic City on Fire), then makes it his own with narrative surprises, striking characters, and some of the most enjoyable movie-movie dialogue and pop-culture patter you’ll find in the movies.

Reservoir Dogs inspired a whole cottage industry of copycats and wannabes but none of them really understood his most creative contributions to the crime genre: his love of movies, his gift for creating distinctive characters, and his playful approach to storytelling. Precisely plotted and engagingly juggled into a rich swirl of flashbacks that wind through the current crisis, this is the work of a director who loves movies and a storyteller engaged with the art of telling stories.

For more background on the film, read Sean Axmaker’s essay on the making of Reservoir Dogs for Turner Classic Movies.

Other highlights include revealing video footage of scenes rehearsed and filmed by Tarantino at the Sundance Institute Directors Workshop Lab a full year before the film was made (featuring Steve Buscemi in key roles and scenes that never made it to the finished film), Class of 92 retrospective look at the indie films and filmmakers at the 1992 Sundance Film Festival, an interactive Film Noir Web with director interviews and notes on classic and modern noir creators and actors, and a collection of brief documentary featurettes (including Small Dogs, about the creation of action figures and Securing Shot with location scout Billy Fox), and a tribute to Lawrence Tierney. Also features K-BILLY Interactive Radio (a collection of audio oddities, including interviews and outtakes from Steven Wright’s deejay patter with Tarantino’s comments), two never-before-seen alternate angles of the famous “Ear” scene, Reservoir Dogs director tribute (a focus on nine filmmakers who influenced Tarantino), a poster gallery, and trailers.