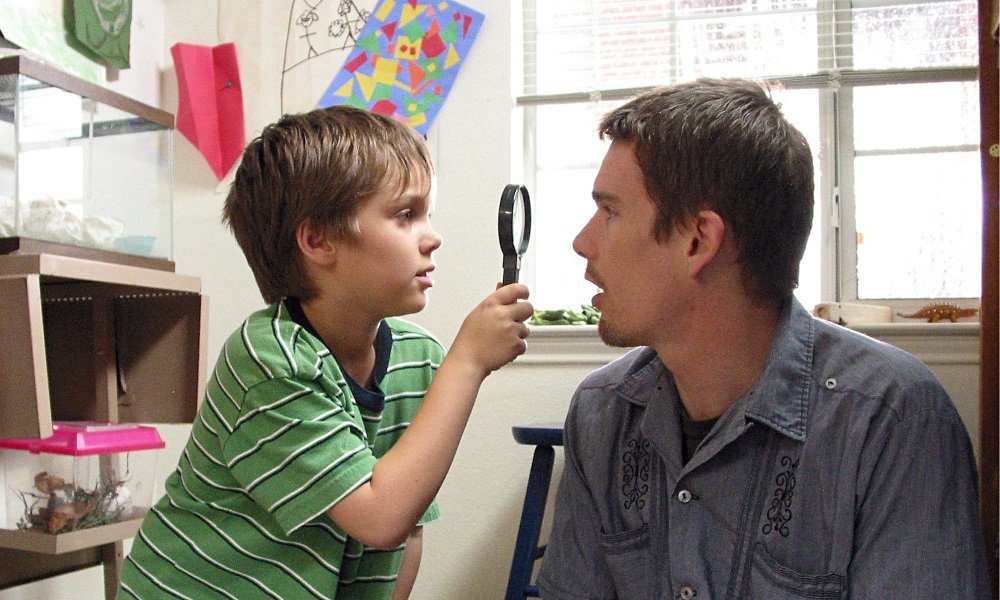 It’s common knowledge that filmmaker Richard Linklater and his four central actors—Patricia Arquette and Ethan Hawke as the parents, Lorelei Linklater (the director’s daughter) as the older sister, and Ellar Coltrane as Mason, a six-year-old boy as the film begins—shot Boyhood (2014) over the course of 12 years to watch not just Mason but everyone in the fictional family grow up and evolve over time. What’s most exciting about the film, however, is the way the film avoids the expected landmark moments and big dramatic conflicts to focus on the sense of life as an experience and an evolution.

Which is not to say there aren’t dramatic moments—Arquette’s single mom shows a history of bad judgment when it comes to life partners and one flight from a particularly bad marriage to a bullying drunk is both harrowing and startlingly realistic—but that the usual spotlight events are left offscreen. Because life isn’t about those flashpoints, it’s about connections made with friends, privileged moments with family, decisions, interests, disappointments, successes, and an evolution of character informed by experience.

That’s what this film becomes: an experience as much in the texture of this fictional life, growing up from first grade to arriving at college, as in the narrative journey. The performances are appropriately low-key and naturalistic and the evolution feels organic, thanks in large part to the collaboration of the actors and incorporating elements of their own experiences in the characters.

It runs 164 minutes, which lends itself to a home viewing (easier to get comfortable for the long haul), but it is something to see straight through as a single narrative experience. Boyhood is a different and daring kind of cinematic experience that is as involving as it is impressive.

Patricia Arquette won an Academy Award for her performance and the film earned five additional nominations, including nods for best picture, Richard Linklater for best director and screenplay, and actor Ethan Hawke. Also won two Film Independent Spirit Awards and awards from the Golden Globes, BAFTA, the Screen Actors Guild, and numerous other groups and organizations.

Criterion Channel also offers supplements from the special edition disc release, including a making-of documentary, a video essay, and interviews.

It was released in a fine edition from Paramount followed by a two-disc Criterion Collection mastered from a new 2K digital transfer supervised by Linklater, features an all-new slate of supplements. There is commentary featuring Linklater and nine members of the cast and crew, the 50-minute documentary “Twelve Years” featuring behind-the-scenes footage from throughout the twelve-year production, the nearly hour-long discussion featurette “Memories of the Present” featuring Linklater and actors Patricia Arquette and Ellar Coltrane, moderated by producer John Pierson, as half-hour “Always Now” with Linklater and Coltrane in conversation, Michael Koresky’s video essay “The Time of Your Life,” about time in Linklater’s films and narrated by Coltrane, and an animated gallery of portraits of cast and crew by photographer Matt Lankes, narrated with personal thoughts from Linklater, Arquette, Hawke, Coltrane and producer Cathleen Sutherland. The accompanying booklet features a heavily footnoted essay by Jonathan Lethem.