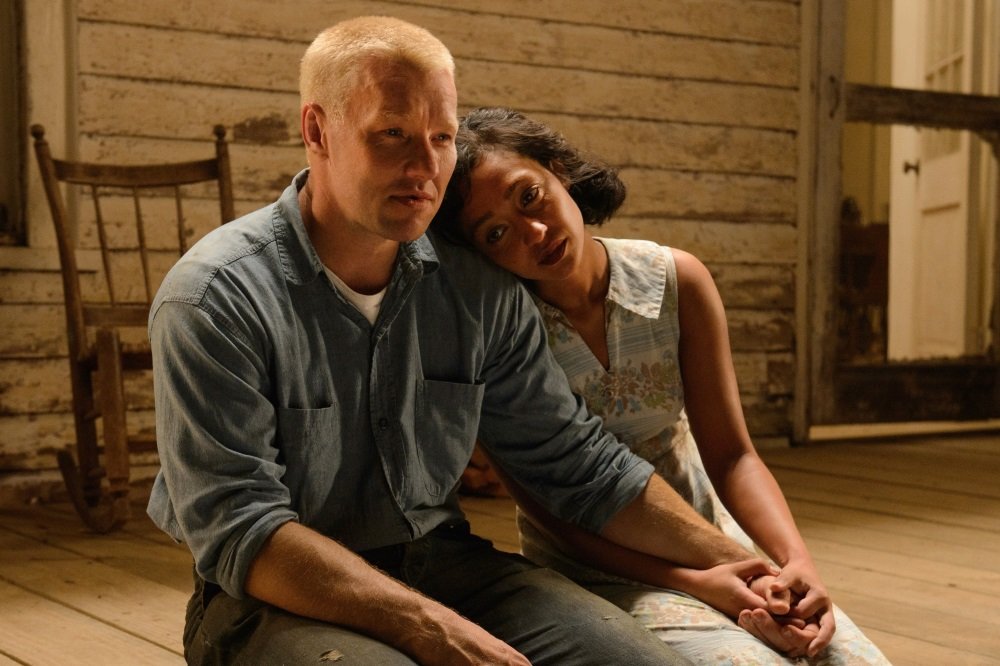 Loving (2016), Jeff Nichols’s portrait of Richard and Mildred Loving, does more than put a face to a landmark Supreme Court decision. Their 1958 marriage was a crime in the state of Virginia because Richard (played by Joel Edgerton with a terse determination) was a white man and Mildred (Ruth Negga, vulnerable yet hopeful) was a black woman. But this is not the portrait of a defiant couple protesting all the way to the Supreme Court. The title is more than just a form of shorthand or a clever double-meaning. It is the core of the film. This is about a marriage, a couple deeply in love and devoted to their family, who just want to live together in their home state.

Their courtship is presented in snapshots yet from the beginning it’s like they’ve been together forever, laying in one another’s arms with a natural intimacy. They live in an integrated pocket of blue collar families that could be a planet away from the segregation of the cities. When Mildred tells Richard she’s pregnant he beams with a rare smile, like it’s the sign he’s been waiting for, even if they have to sneak across the border to Washington D.C. for the ceremony and set up a household in secret. Negga earned a well-deserved Oscar nomination for her performance as Mildred and Australian actor Edgerton received a Golden Globe nomination for the stolid Richard, a man who looks like a redneck stereotype under his buzz cut and tight mouth yet is like a member of her family even before they marry.

The police raid their home as if they were terrorists and the Lovings are essentially banished from the state (and their families) for 25 years, allowed to return only individually, never as a couple, upon threat of imprisonment. One of the more observant details is how the lawmen and judges who prosecute the “crime” don’t seem particularly invested in the foundation of the miscegenation laws—there is no outrage or zeal in their actions and no outward animosity or virulent bigotry in their treatment of the Lovings, just a halfhearted quote from scripture—but their unquestioning acceptance and dutiful enforcement of the law is a more illuminating insight to institutional racism accepted at face value.

All the Lovings want is bring their family home to Virginia but when the ACLU takes up their case the ramifications are not lost on them. Knowing full well how the attention will intrude on their lives—and the Lovings are private people who simply want to be left alone—Mildred gives their blessing with a smile and a nod, Richard silently agrees, and it head to the Supreme Court under the drive of committed but inexperienced Bernie Cohen (comedian Nick Kroll, superb as the roused young lawyer) and legal guidance of Phil Hirschkop (Jon Bass).

Filmmaker Jeff Nichols has straddled genre conventions in the past but his films—Take Shelter (2011), Mud (2012), Midnight Special (2016)—have all been built on love and commitment to family and the powerful emotions stirred up when they are threatened. Given a historical canvas and opportunity to grandstand, Nichols instead steps back, skipping courtroom dramatics to focus on the quiet moments between the Lovings. He doesn’t tell us about their commitment to one another, he shows us in one privileged moment after another (including scenes that quote the famous Life magazine photos that showed the country the depth of their relationship back in the 1960s). It gives the film a quiet intimacy that some critics have found distant and anticlimactic. I think it invites viewers into their relationship and reminds us that history-making legal precedent aside, Loving vs. Virginia is about two adults in love fighting for the right to simply be together.

Ruth Negga earned an Oscar nomination for her performance.

, iTunes, GooglePlay, and other services. Availability may vary by service.
Loving [DVD]

The Blu-ray and DVD release from Universal Home Video features commentary by Jeff Nichols and three brief featurettes (under five minutes apiece): “Making Loving” (a quick introduction to the cast and filmmakers), “A Loving Ensemble” (on casting), “Loving vs. Virginia” (on the 1967 court case) and “Virginia: A Loving Backdrop” (on the locations). The Blu-ray editions includes bonus DVD and Ultraviolet HD copies of the film.