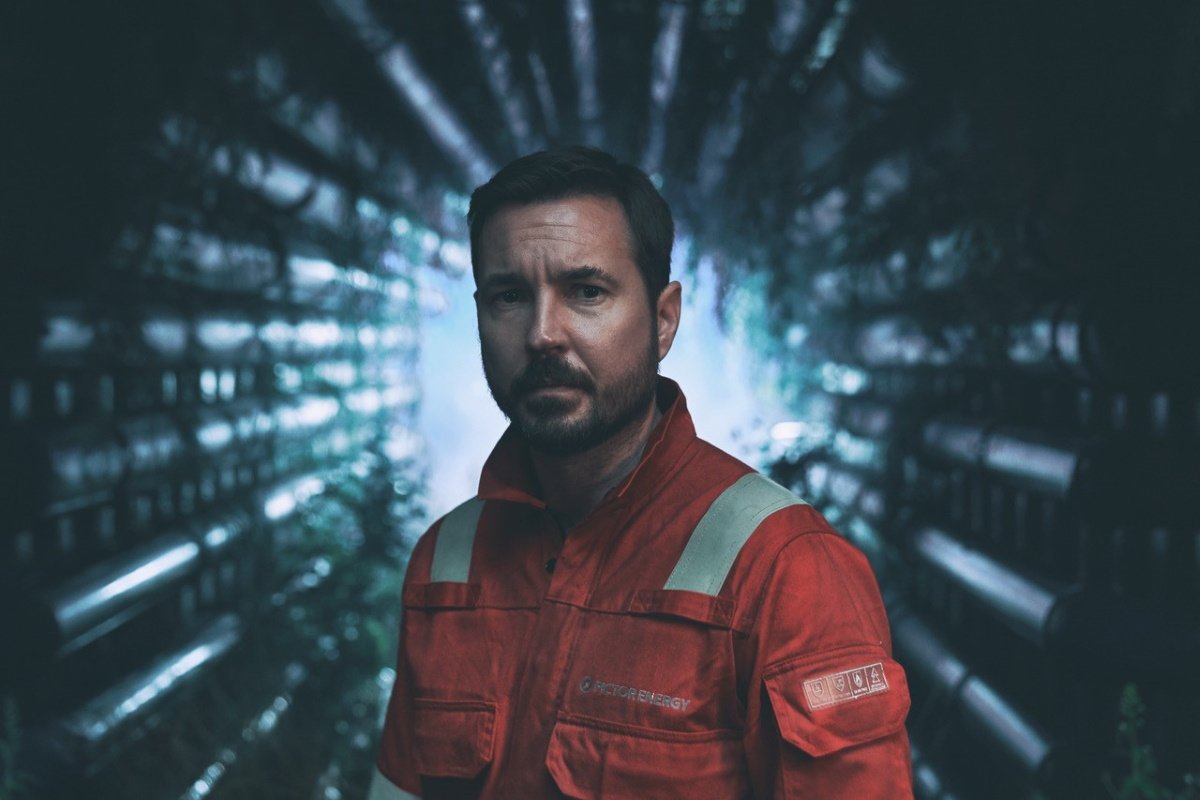 An oil rig in the North Sea off the Scottish coast gets cut off from the mainland when a mysterious fog envelopes the structure in “The Rig: Season 1” (2023, TV-14). The stranded members of the crew begin to buckle under the stress as mysterious deaths and inexplicable accidents sets them against one another. Martin Compston, Emily Hampshire, and Iain Glen star in the supernatural thriller. New episodes on Fridays. (Prime Video)

An eccentric detective (Christian Bale) investigates the gruesome death of a cadet at the West Point military academy in “The Pale Blue Eye” (2023, R), an atmospheric murder mystery set in 1830. Stumped by the case, he enlists the help of a young cadet by the name of Edgar Allan Poe (Harry Melling), who helps profile the killer and turns drinking buddy to the detective. Toby Jones, Lucy Boynton, and Gillian Anderson costar in Scott Cooper’s moody thriller. (Netflix)

The darkly comic social satire of foodie culture “The Menu” (2022, R) stars Ralph Fiennes as a superstar chef whose exclusive restaurant on a Pacific Northwest island is the setting for a unique dining experience for a group of entitled patrons. Anya Taylor-Joy costars as the odd woman out who sees through the chef’s showmanship and egotism as the courses get increasingly dangerous. (HBO Max)

“Jurassic World: Dominion” (2022, TV-14), the third film in the “Jurassic World” series, is set in a world where dinosaurs have escaped into the world at large. Chris Pratt and Bryce Dallas Howard return along with original “Jurassic Park” stars Laura Dern, Jeff Goldblum, and Sam Neill. (Prime Video)

Classic pick: Burt Lancaster, Deborah Kerr, and Montgomery Clift star in “From Here to Eternity” (1953), a drama set at a Pearl Harbor military base in the days leading up to December 7, 1941. It won eight Academy Awards, including best picture, director, and acting awards for costars Donna Reed and Frank Sinatra. (HBO Max)

Two of the most celebrated films of 2022 are now available to rent on VOD: “Tár” (2022, R), featuring an Oscar-tipped performance by Cate Blanchett as a world-famous conductor, and Martin McDonagh’s “The Banshees of Inisherin” (2022, R) with Colin Farrell and Brendan Gleeson (also streaming on HBO Max).

True stories: “Mission: Joy – Finding Happiness in Troubled Times” (2023, TV-PG) documents the friendship between Archbishop Desmond Tutu and the Dalai Lama and the limited series “Madoff: The Monster of Wall Street” (2023, TV-MA) investigates how he executed and sustained his infamous Ponzi scheme.

More streaming TV: the eleventh and final season of “The Walking Dead“ (TV-MA), the hit cable survival drama set in the zombie apocalypse, and the first two seasons of the medical drama “New Amsterdam“ (TV-14) join the Netflix line-up.

International passport: five street kids from Medellín hit the road when one of them inherits land in rural Colombia in “The Kings of the World“ (Colombia, 2023, TV-MA, with subtitles).

Sylvain Chomet’s animated absurdist fantasy “The Triplets of Belleville” (France, 2003, PG-13, with subtitles) is a mix of musical, mystery, and madcap comedy.

Streaming TV: episodes of the new ABC series “Will Trent“ (TV-14), starring Ramón Rodríguez as a special agent in the state of Georgia, streams on Wednesdays. Also streaming a day after their network debuts are the second season of “Fantasy Island“ (TV-14) and the competition series “Special Forces: World’s Toughest Test“ (TV-14).

“John Wick“ (2014, R) and the sequels “John Wick: Chapter 2“ (2017, R) and “John Wick: Chapter 3 – Parabellum“ (2019, R), starring Keanu Reeves as a hitman whose vengeance sets the underworld against him, stream for a month only in advance of the fourth film coming to theaters.

International passport: a cop on suspension tries to save a woman in danger with just a telephone in “The Guilty“ (Denmark, 2021, R, with subtitles) and “Woman at War“ (Iceland, 2018, TV-14, with subtitles) is both a serious drama of ecological activism and a warm, winning story of devotion, sacrifice, and family.

New episodes of the second season of the animated adventure “Star Wars: The Bad Batch“ (TV-PG) stream on Wednesdays.

A pastor tries to remake his image after a sex scandal in the mockumentary “Honk for Jesus. Save Your Soul.“ (2022) starring Sterling K. Brown and Regina Hall.

True stories: “Sometimes When We Touch: Season 1“ (TV-MA) looks back at the culture and influence of 1970s soft rock.

Tom Hanks stars in “Apollo 13“ (1995, PG), based on the true story of the NASA mission to the moon that almost ended in disaster.

The science fiction thriller “Vesper“ (2022, not rated) follows a 13-year-old girl and her father trying to survive after Earth’s ecosystem collapses.

A detective investigates a murder that was, in reality, committed by his wife to cover her dark past in “Clean Sweep: Season 1” (not rated), an Irish thriller inspired by a true story. (AMC+ and Sundance)

A violent thug is suddenly blessed with power of healing with his hands in “Christian“ (Italy, not rated, with subtitles), a limited series supernatural dramedy.

“Márta Mészáros’s Diary Films” trilogy—“Diary for My Children“ (1984), “Diary for My Lovers“ (1987), and “Diary for My Mother and Father“ (1990)—is a personal exploration of Hungary’s history after World War II, using stories from the filmmaker’s own life experiences.

The ten films “Starring Joan Bennett” in this collection span the witty romantic comedy “Me and My Gal“ (1932) costarring Spencer Tracy and “Little Women“ (1933) with Katharine Hepburn to the bittersweet romantic drama “There’s Always Tomorrow“ (1956) with Barbara Stanwyck and Fred MacMurray. In between are the three films she made for director Fritz Lang: World War II thriller “Man Hunt“ (1941) and film noir classics