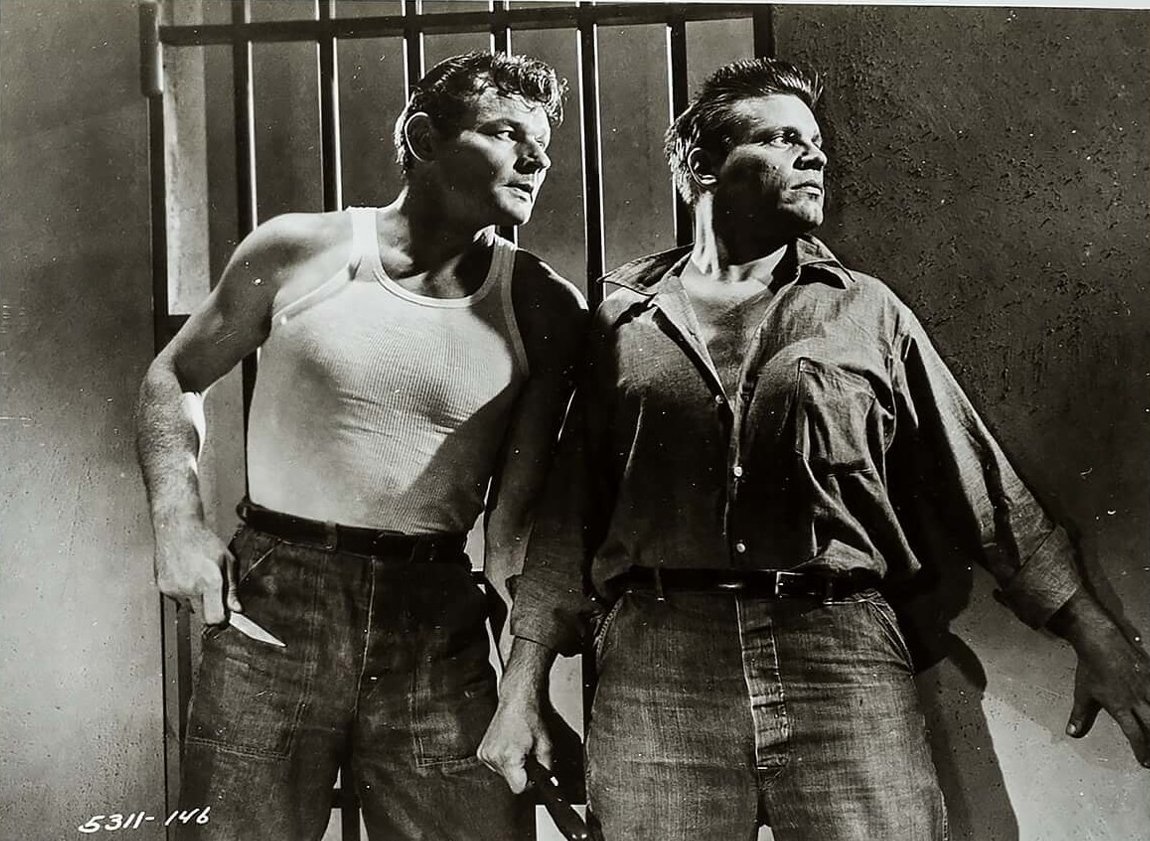 It may not have been obvious at the time but Riot in Cell Block 11 (1954) was a perfect match of film and filmmaker. Don Siegel later made a name for himself with his gritty Clint Eastwood collaborations (not to mention his brilliant Invasion of the Body Snatchers) but was just a promising journeyman director when he embarked on this low-budget 1954 film, a project initiated by producer Walter Wanger after he served a short sentence for assault with a deadly weapon (he shot a man that he thought was sleeping with his wife, Joan Bennett). Riot gave Siegel a situation where violence was a defining element of the world and the people in it, a power always threatening to blow up and burn out control, and he used it to create a powderkeg of thriller with a message underneath the drama.

It begins with a newsreel-like prologue to establish its ripped-from-the-headlines bonafides—”Where will the next riot occur?” teases the narrator after showing us a succession of protests in prisons across the country—and then jumps into the fictional story of a carefully-planned riot in the punishment block of an overcrowded prison. (Phil Karlson used the same structure a year later for an even more explosive The Phenix City Story.) Neville Brand, a real-life war hero who made a career playing Hollywood villains thanks to his tough manner and scuffed-up face, is the ringleader of this protest, a convicted killer who has no agenda but to call attention to prison conditions. His fellow inmates are not so committed to his restraint, however, and the prison guard hostages are in constant danger of retribution from vindictive prisoners, especially Leo Gordon as a sociopath who has no interest in curbing his impulses. The warden (Emile Meyer) is not only sympathetic to their demands, he’s already complained to the state about the prison overcrowding and understaffing, lack of education and training programs for the inmates, and insufficient training for the guards, but the state politics demand a policy of no negotiations with rioters, which just raises the stakes and the temperature of the stand-off.

Siegel helms this film with both a hard-edged portrait of the violence and desperation of the situation and an intelligent engagement with the issues. Most of these guys have nothing to lose. Others are so angry that they riot in sympathy, whether it helps or not (in this film, it’s both). Brand holds the center as a both, a guy ready to follow through on his threats if necessary but restrained and far-sighted enough to hope it doesn’t come to that. He’s fighting the power on both sides: holding back what is close to a paramilitary response from the outside while trying to keep the volatile chemistry inside from combusting. He’s sympathetic to the prisoners without whitewashing their crimes or their violent nature. Much of the film was shot on location at Folsom Prison with guards and prisoners serving as extras and advisors, which gives the film added authenticity, but it’s Siegel’s direction that really lights the fuse. And Siegel is aware of the tension between social message and violent spectacle; he, like Brand’s character, realizes that it takes a big story to get people to pay attention to the issues. Siegel, however, is more interested in the personalities and the conflicts and the lengths to which both sides will go in this war.

Add to My List. Criterion Channel presents the film with supplements from the disc release (see below).

The Blu-ray and DVD editions from the Criterion Collection are mastered from a new 2K digital restoration in Academy Ratio (1.37:1), which has raised some debate; in some shots the headroom is distracting and the film looks like it should be masked to 1.66:1 widescreen, in others it looks well balanced and composed. Clearly the film was protected for both aspect ratios, but it’s not clear which the director’s preferred or intended format was. Features commentary by film scholar Matthew H. Berstein, audio excerpts from the director’s autobiography “A Siegel Film” and Stuart Kaminsky’s 1974 book “Don Siegel: Director,” both read by Siegel’s son Kristoffer Tabori, and excerpts from the 1953 NBC radio documentary series “The Challenge of Our Prisons,” plus a fold-out booklet with an essay by Chris Fujiwara.