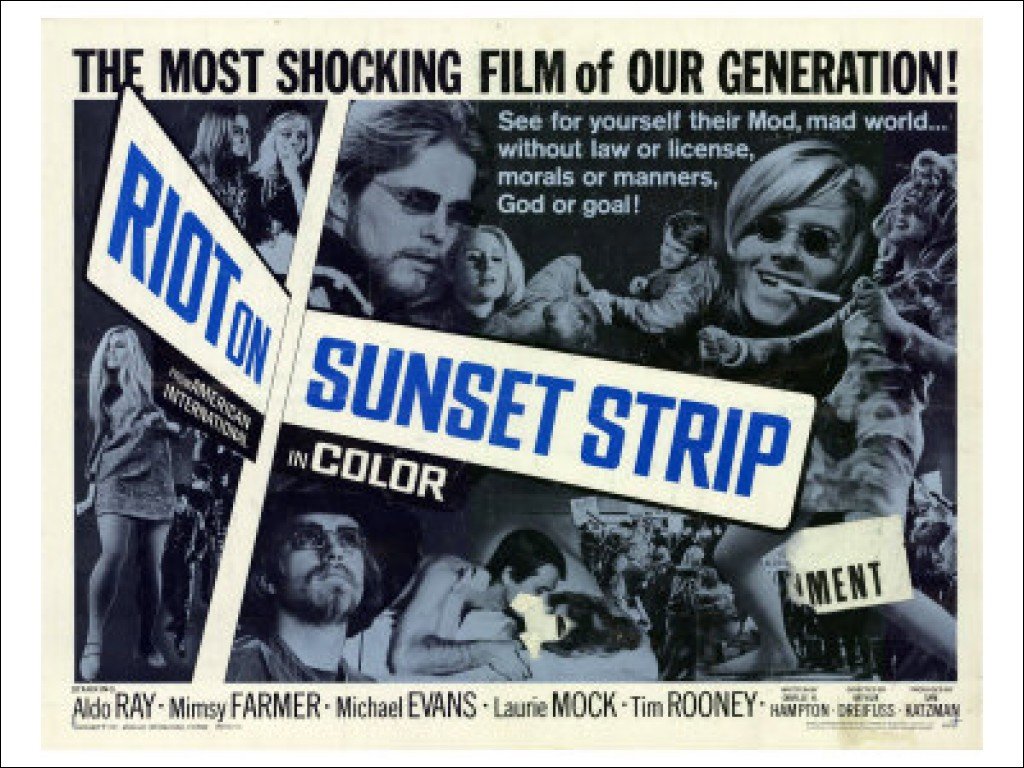 Independent producers and exploitation studios were often more adept at cashing in current events and cultural tides when it came to youth culture movies, if only because the very nature of the business model made them open to hungry young director and writers and other film professionals looking for a break. Often, but by no mean always.

There is no riot on Sunset Strip in Riot on Sunset Strip (1967), which cashes in on a the counterculture movement and a real-life clash between wild youth and Los Angeles cops with a fairly square story of the generation gap. But it does feature performances by sixties psych-rockers The Standells (who perform the title song, which for those who care is an alternate take of the release single), The Chocolate Watch Band, and garage band The Enemies, all playing in the film’s Sunset Strip nightclub. And there is future cult actress Mimsy Farmer as the good girl blonde who rebels against her parents by diving into the Sunset Strip culture of drugs and protest, sneering at the establishment that her father represents. Meanwhile it’s framed by narration aimed at the parents, part exposé and part plea for understanding. It’s us versus them but “us” is the adult generation, a stuffy, tightly-wound bunch appalled at the hippie culture while Hollywood police officer Aldo Ray tries to bridge the generation gap with understanding and tolerance. At least until his little girl is drugged and (after a freakout, presented as a slo-mo go-go dance as performance art) gang raped, which is neither as exploitative nor as provocative as it sounds.

Producer Sam Katzman is no Roger Corman and never taps into the counterculture beyond surface trappings and radio playlists and director Arthur Dreifuss is no ambitious young man tapped into the youth zeitgeist but a journeyman warhorse cranking out a film with a schizophrenic sensibility. For a film with “riot” in the title, it’s remarkably non-confrontational and anti-climactic. But it does have all that hippie color, drug freak-out craziness, and The Standells.