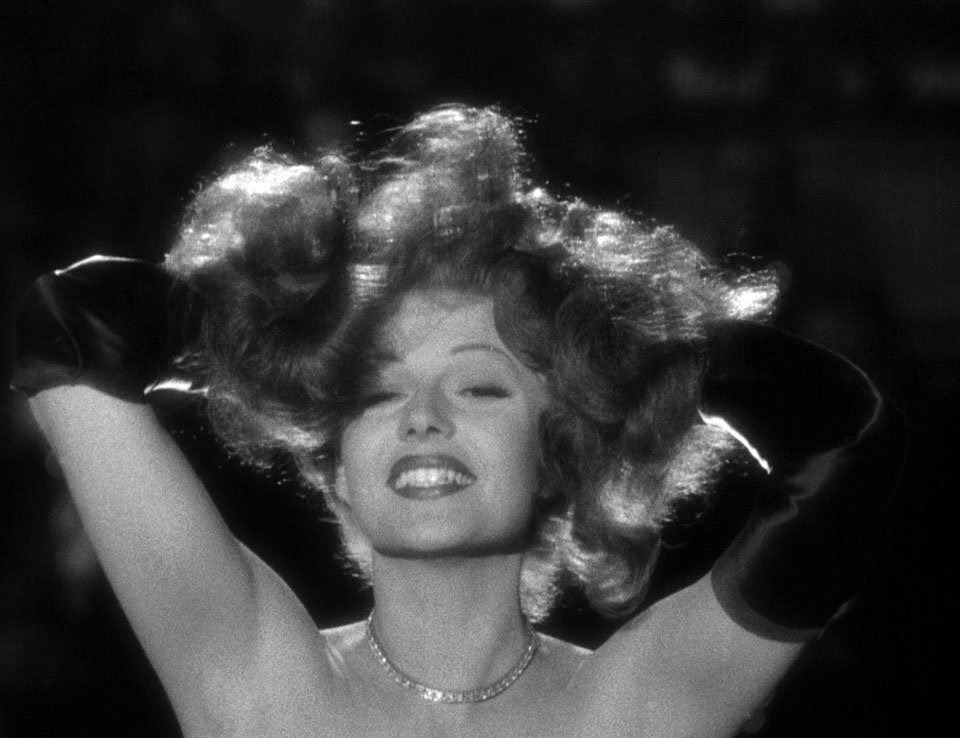 Rita Hayworth is at her most iconic as the forties sex-bomb in Gilda (1946), a film noir classic co-starring Glenn Ford as Johnny Farrell, an American tough guy in Buenos Aires, and George Macready as Ballin Mundson, the owner of a nightclub and illegal casino who hires Johnny as his club manager. Just as in Casablanca, another Hollywood melodrama of an American tough guy abroad during the war, the gambling room is hidden in the back room of the nightclub and is pretty much an open secret. “Gambling and woman don’t mix,” is the owner’s motto, which is just fine with Johnny, who makes himself Mundson’s right hand man. Then Mundson breaks the pact when he returns from a trip with a glamorous wife.

Rita Hayworth’s entrance is pure Hollywood starcraft: a perfectly lit close-up as she whips her head into frame, her hair lashing back and revealing her bright face and wide, mischievous grin. It turns out that Johnny and Gilda have history and Gilda makes a point of flaunting her indiscretions in front of Johnny, who does his best to keep them hidden from Mundsen. There’s a criminal plot involving a monopoly on Tungsten and German investors who may be Nazi criminals in hiding (apart from a headline reading “German Surrenders,” there’s no mention of the war) but the drama revolves around the sexual tension and vicious punishments they inflict on one another. Hayworth plays the prowling sex kitten, slinking around the dance floor, laughing with a new pretty boy on her arm, even performing a symbolic striptease on the nightclub floor while singing “Put the Blame on Mame,” and Ford is younger and leaner and meaner than we’re used to, which makes him a little unpredictable.

The sexual indiscretions are suggested rather than shown and ultimately denied in contrived happy ending that contradicts everything leading up to it. Which is not uncommon for Hollywood films of the era, which often turned on a dime to placate the production code. This is one of the most suggestive films of the era—not just for Gilda’s seductive taunts and frequent (offscreen) trysts but for the way Johnny competes with Gilda for Mundsen’s favor—and the emotional violence between Johnny and Gilda still draws symbolic blood. Charles Vidor directs and the shadowy cinematography is by the great Rudolph Maté.

It was added to the National Film Registry in 2013.

and other services. Availability may vary by service.
Gilda [DVD]

The Criterion Blu-ray and DVD features a gorgeous transfer with a new interview with film noir historian and Film Noir Foundation founder Eddie Muller and an archival 1964 made-for-TV documentary “Hollywood and the Stars: The Odyssey of Rita Hayworth,” plus (carried over from the earlier DVD) observant commentary by film critic and historian Richard Schickel and a video introduction by Martin Scorsese and Baz Lurhmann. The booklet features an essay by Sheila O’Malley.