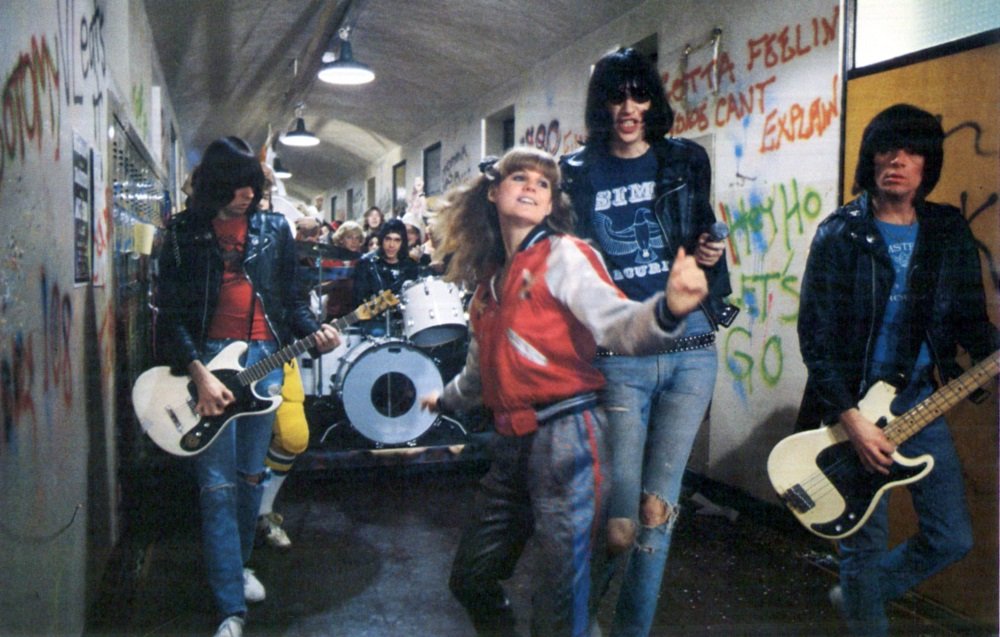 “Do your parents know you’re Ramones?”

If Rock ‘n’ Roll High School (1979) isn’t the greatest rock and rebellion film of all time it is certainly on the short list, a pure, cheerfully juvenile blast of blitzkrieg guitar rock, Looney Tunes sight gags, teenage hormones, and rebellion against authority because it’s there. They aren’t exactly rebels without a cause, it’s just that their cause is music and fun and the celebration of power punk rockers The Ramones, who in this universe play the rock anthems of the day. At the risk of dating myself, when I discovered the film playing in heavy rotation on HBO, I was in the high school that alternative music culture forgot and had no idea who The Ramones were (or even what punk music really was) but responded to the four-square rock anthems in three chords and double time the way I responded to Chuck Berry: the essence of the rock ‘n’ roll. That’s what director Allan Arkush responded to as well. Various stories tell of producer Roger Corman’s bright idea to do a “Disco High School” movie (Arkush talked him out of that one) and of his preference to hire Cheap Trick as the featured band (too expensive, it turned out). And who knows, the stories may be true, or just more Corman musings that were never destined to go anywhere. What is definitely true is that Arkush wanted to try his hand at a rock musical and create an American A Hard Day’s Night with a B-movie budget, a California culture setting, and an anything goes comic sensibility. It turned out that the Ramones were on the same page.

Decades later, the Ramones are still part of my playlist and the film remains as energetic, endearing, and fun as ever, not so much a dated artifact from my g-g-g-generation as a timeless slice of teenage kicks and a cartoon of youthquake rebellion against the killjoys of authority. While the seminal New York power punk band provides the beat, P.J. Soles powers the film as Riff Randell, rock ‘n’ roller and aspiring songwriter who just wants to spread the gospel of rock music. Mary Woronov is her arch nemesis Miss Togar, the new high school principal whose controlling personality and authoritarian streak makes Nurse Ratched look soft and sweet. Where Soles literally dances her way through the film, swinging and swaying down the halls and barely able to keep still in class, Woronov is a drill sergeant in a skirt and a pinched expression who sends her toadying team of storm trooper hall monitors (imagine Jonah Hill and Seth Rogan in these roles) to rat on anyone who dares have any fun under her watch.

The plot has something to do with Riff trying to get her songs to The Ramones, the handsome but dull football hero Tom Roberts (Vincent Van Patten) trying to get a date, and Riff’s best friend, school brain and unappreciated cutey Kate Rambeau (Dey Young) pining for Tom. But that’s just an excuse for director Allan Arkush (with help from co-scenarist and buddy Joe Dante and his gang of screenwriters) to unleash a cascade of sight gags (the great paper airplane sequence, BTW, was done by uncredited guest director Jerry Zucker, who was getting a little experience for his upcoming directorial debut: Airplane!), a fantasy of a benevolent high school black market operator (Clint Howard as Eaglebauer, still his greatest role) headquartered in the smoke-filled restroom stall, and a dozen or so Ramones tunes, from music video diversions (Riff’s daydream, which ends up with her smoking dope, getting naked, and still remaining within the bounds of PG) to an entire mini-concert movie within a movie.

The fact that the shaggy-haired, leather-jacketed mooks have all the screen charisma of walking possums seems beside the point. P.J. Soles doesn’t moon over Joey Ramone because he’s a dreamboat but because he creates the greatest music of her rock-powered world. And because it’s weirdly hilarious watching her go all swoony while staring into his greaser-thug mug. The generational combat turned into destructive triumph is pure fantasy, another part of the whimsy and absurdist gags (watch out for exploding mice) and non-stop playlist of great rock (the soundtrack also includes Chuck Berry, Nick Lowe, Alice Cooper, Devo, The MC5, Fleetwood Mac, Brownsville Station’s “Smoking in the Boy’s Room” and more) thrown into a cheap exploitation blast packed with inspiration, creative ambition and a love of moviemaking and rock and roll. “Things sure have changed since we got kicked outta high school.”

Available on Blu-ray and DVD special editions from Shout! Factory. It was first given the special edition treatment back in the laserdisc days, with commentary by director Allan Arkush, writer Richard Whitley, and producer Michael Finnel and a substantial audio-only clip from the Ramones concert staged for the production (including numbers not included in the film) and was an early release from Roger Corman’s New Concorde DVD line (with all those supplements intact). A few years later, Corman sold the library to Disney, which turned around with a new DVD release, adding a second commentary track (by Corman and co-star Dey Young) and a retrospective documentary.

Shout! Factory carries over all of the supplements for their Blu-ray and DVD releases, and adds in a few more, including a lively new commentary track by director Allan Arkush swapping memories and production stories with stars P.J. Soles and Clint Howard and another commentary by screenwriters Richard Whitley and Russ Dvonch, an 11-minute interview with Arkush with even more enthusiastic remembrances (“So much of it was based on me and what happened to me in high school.”) and a new featurette with stars P.J. Soles, Dey Young and Vincent Van Patten returning to the high school location to swap stories and memories.