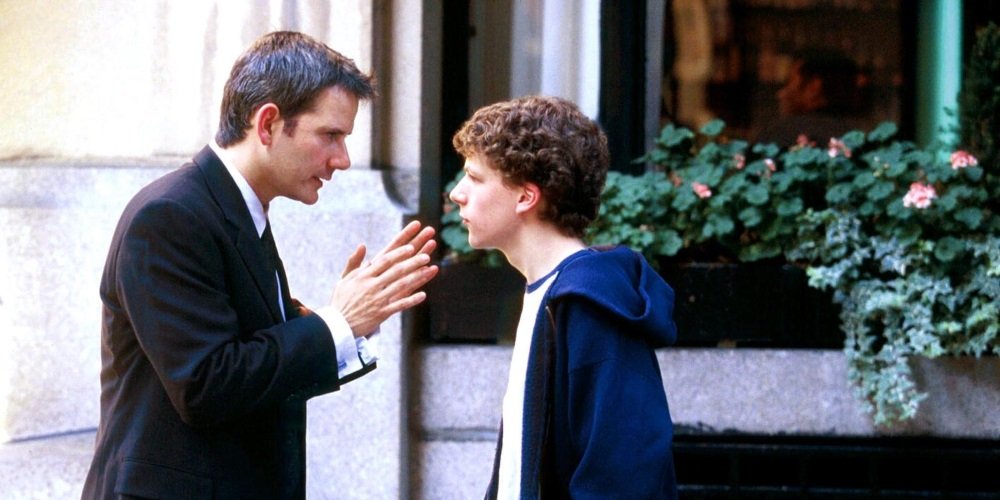 Scott owns the film from scene one as Roger holds court over drinks, keeping a group of working buddies in the thrall of his patter as he ponders the utility and extinction of the male sex. He’s a combination con man, life of the party, and compulsive pick-up artist with a gift for dead accurate psychological profiles, a line for every occasion, and a darkness that pushes seduction into misanthropic rants. Spiraling into depression after being dumped by lover/boss Isabella Rossellini (apparently his utility has reached its limit), he turns self-pity into fuel for a lesson in the art of womanizing for an eager, innocent young student.

A very young Jesse Eisenberg (early in his career) is his young nephew who lands in the big city to meet his notorious Uncle Roger, who plunges him right into the social jungle. Sneaking Nick into a classy New York bar, he introduces him to the games people play with the help of veteran game-players Jennifer Beals and Elizabeth Berkley, a pair of jaded singles softened by the boy’s naiveté and intrigued by Roger’s uncanny, often obnoxious charm and cunning verbal acrobatics and mind games.

Sharply written and confidentially directed, the feature debut of Dylan Kidd is the kind of character study in romantic cynicism that actors live for. Under the clipped delivery, confident air, and mask of impenetrability of this glib charmer is a sour, self-loathing misanthrope who projects his own misery and unhappiness on world, and then passes judgment on it one person at a time. Scott savors every word and allows us to see both the calculating mind behind every sharp glance as he sizes up his next conquest, and the miserable soul scratching to get out from behind the self-created caricature.

It won three awards at the Venice Film Festival and the Jury Prize at the Tribeca Film Festival, and it earned three nominations at the Film Independent Spirit Awards.

and other services. Availability may vary by service.
Roger Dodger [DVD]

The DVD from Lionsgate features two commentary tracks (one by writer/director Dylan Kidd and cinematographer Joaquin Baca-Asay, the other by Kidd with stars Campbell Scott and Jesse Eisenberg), a deleted scene with optional director commentary, director Dylan Kidd’s introduction to the DVD, production interviews hosted by Kidd (“The Composer and the Mixer,” “The Producer,” and “The Executive Producer and the Director”), and two featurettes: the 11-minute behind-the-scenes study “Examination of the a Scene: Opaline” (an of the film’s key bar scene) and “New York at Night: Rodger Dodger Walking Tour with Jesse Eisenberg, “The Players Guide to Scoring.”