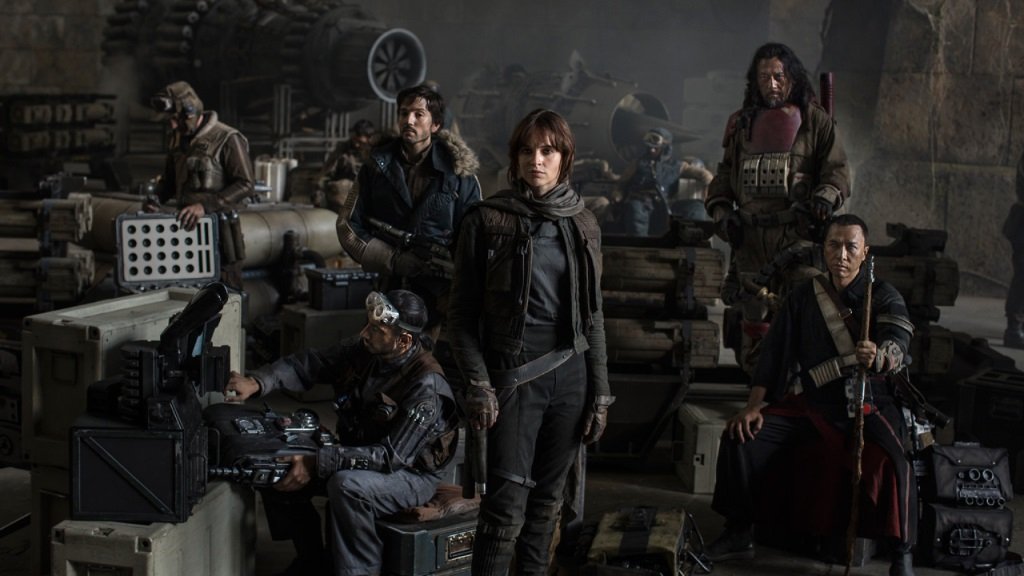 Rogue One: A Star Wars Story (2016) is exactly as the title promises.

Set in the margins of the original Star Wars, it stars starring Felicity Jones as Jyn Erso, an orphaned survivor living on the fringes of Empire-controlled territory. Part scavenger opportunist and part scheming survivor, she’s been raised in hiding by a revolutionary extremist (Forest Whitaker) and forged by experience into a disillusioned cynic and suspicious loner. Her father (Mad Mikkelson) is an engineer who defected from the Empire and she’s been on her own since he was recaptured to build them a super weapon. Yep, he’s the architect of the Death Star and, years later, Jyn is recruited by the Rebel Alliance (which, in this take, are a lot less allied than you might expect) to find him. She means to rescue him but Cassian Andor (Diego Luna), the rebel spy who tracked her down, has orders to kill him.

In a lot of ways, this is not your usual Star Wars story. Yes, this intergalactic “Dirty Half-Dozen” has all the action you expect, from laser blast shoot-outs and martial arts scuffles on the ground to the screeching fighter battles in space (because in space, everyone can hear you screech), the exotic locations and space age nostalgia set design, and of the distinctive mix of state-of-the-art effects with scuffed-up props and vehicles that look like they’ve been salvaged and rebuilt from the wrecking yard of the future past. What’s difference is the murky morality of rebel forces. This is not the culture of shared purpose and revolutionary unity of Star Wars but a portrait of the resistance as a conflicted collective of dedicated soldiers, compromised leaders, and a few officers losing faith in their mission. Our team of outcasts and rebels—including defecting Empire pilot Bodhi Rook (Riz Ahmed), blind warrior Chirrut Îmwe (martial arts superstar Donnie Yen), his shaggy sharpshooter buddy Baze Malbus (Wen Jiang), and reprogrammed Imperial droid K-2SO (Alan Tudyk), whose deadpan pessimism is the closest the film has to comic relief—forges their own common purpose and goes rogue, defying orders to complete the mission.

Director Gareth Edwards, recruited from his American Godzilla revival, drives the plot-heavy production through one impossible infiltration and escape after another. It’s packed with action but without the swashbuckling thrill of the original, more intergalactic war movie than adventure fantasy, or anything beyond nominal personalities behind the characters. You don’t invest in the people here. You invest in a mission which, in case you’ve somehow missed out on the pop culture buzz around this film, turns into a genuine prequel to the original Star Wars (A New Hope for all you franchise revisionists). Just how did the rebels get those Death Star plans? This is their story, retconned a bit (“Many Bothans died to bring us this information,” is the exact line from Star Wars, but these folks are not Bothans; there’s a whole digressive discussion around this contradiction, if you have any desire to dive into it), and it dovetails into the original trilogy with some rather skin-crawling CGI recreations of Peter Cushing as Tarkin and Carrie Fisher as Leia to tie it all up.

This is a slightly darker shade of Star Wars adventure, for better and for worse. But it’s also a refreshingly diverse collection of heroes this time, a multi-cultural crew against a white supremacist dictatorship. Those kinds of details matter in a film culture that tends to fall back on the same kinds of action heroes (mostly white men). You may not want to have a beer with this crowd, but you can appreciate their commitment and their sacrifice amidst the space opera action before Luke Skywalker ever heard of The Force.

), iTunes, GooglePlay and other services. Availability may vary by service.
Rogue One: A Star Wars Story [Blu-ray]

The DVD and Blu-ray is from Lucasfilm and Disney. This is a Lucasfilm production and release, which means a state of the art presentation. It looks and sounds superb and is designed to make the most of high-end sound systems with a 7.1 DTS-HDMA sound mix (beyond the capabilities of my older sound system, but it still sounds great in my home).

There are numerous incarnations of the film, some designed specifically with exclusive bonuses for select retailers (including exclusive 3D Blu-ray discs for Target and Best Buy), but all of the Blu-ray editions feature two supplements. “The Stories” is a ten-part behind-the-scenes documentary that can be skipped through by topic (chapters in the main characters, “The Empire,” “Visions of Hope: The Look of Rogue One,” even the CGI recreations of Peter Cushing and young Carrie Fisher) or watched straight through as a 68-minute features. “Rogue Connections” (4 ½ mins) is a quick trivia tour through characters, droids, and other references to other films in the Star Wars universe. The Blu-ray also includes a bonus DVD and Digital HD copy of the film.