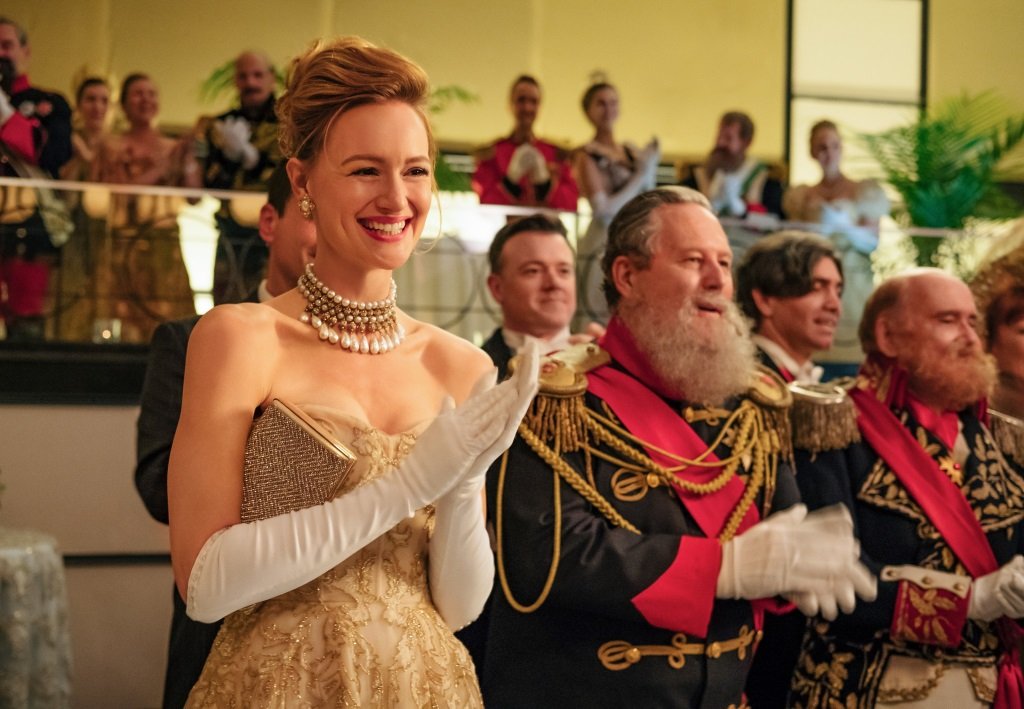 The Romanoffs, the first new series from creator Matthew Weiner since Mad Men, takes an anthology approach to stories of descendants of the Russian royal family in the present day in locations around the world. Each feature-length episode boasts impressive production values and the cast includes Aaron Eckhart, Marthe Keller, Corey Stoll, Kerry Bishé, Diane Lane, and Isabelle Huppert.

“The light, sweet tone of The Romanoffs is perfume covering the stench of cultural rot,” writes Matt Zoller Seitz for Vulture. This series “is looser and more relaxed than Mad Men in ways that both please and frustrate. The women tend to be beleaguered and sometimes abused; the men weak, petty, and conniving; the sets and costumes sumptuous; and the music (a mix of classical and pop) very effective, if on-the-nose in a way that Mad Men rarely was.”

British filmmaker Paul Greengrass directs 22 July (2018, not rated), which takes on the real-life 2011 terrorist attacks by a far right extremist in Norway and the aftermath as the country deals with the trauma.

Fiction that hews close to fact, the movie is serious and meticulous, yet hollow,” complains New York Times film critic Manohla Dargis. She observes that Greengrass “brings his estimable skills to this new story, taking you through it, grim beat by beat” but fails to offer “a clear, motivating idea (political or otherwise).”

It premiered at the Venice Film Festival and plays select theaters as it streams on Netflix.

In the Halloween mode, Carla Gugino, Michiel Huisman, and Timothy Hutton star in the Netflix Original limited series The Haunting of Hill House, adapted from the Shirley Jackson novel and directed by Mike Flanagan, and Dan Stevens and Lucy Boynton star in the Netflix Original horror film Apostle (2018, not rated) from filmmaker by Gareth Evan, director of the cult action film The Raid.

In the new Hulu Original horror series Light as a Feather, five teenage girls face a series of gruesome deaths that echo the predictions from what they thought was an innocent party game. All 10 episode available to stream.

Classic pick: the epic western Red River (1948) is a Mutiny on the Bounty on the American frontier starring John Wayne and Montgomery Clift. Streaming on Amazon Prime Video. Reviewed on Stream On Demand here.

Shudder is gearing up to be your essential Halloween movie provider with a selection of classic and contemporary thrillers, chillers, and horror films and TV shows from around the world, from Alfred Hitchcock to Stephen King to exclusive films like Mayhem (2017, not rated), Revenge (France, 2017, R, with subtitles) and Ryûhei Kitamura’s Downrange (2017, not rated). Try it for a 7-day free trial or sign up for $4.99/month.

An awkward, introverted teenage girl endures the final week of Eighth Grade (2018, R) in the insightful and sensitive comic drama written and directed by comedian Bo Burham. Be warned that this acclaimed production is R-rated. Also on DVD and at Redbox.

Gus Van Sant directs Don’t Worry, He Won’t Get Far on Foot (2018, R), starring Joaquin Phoenix as Portland, Oregon, artist John Callahan, who recreated himself as a cartoonist after a car wreck left him quadriplegic. Also on DVD and at Redbox.

Available same day as select theaters nationwide is thriller I Still See You (2018, PG-13) with Bella Thorne and gambling drama All Square (2018, not rated) with Michael Kelly.

Maggie Gyllenhaal stars in The Kindergarten Teacher as a dedicated teacher whose interest in gifted student crosses over into obsession. The film, a remake of a 2014 Israeli drama, comes to Netflix after debuting at Sundance earlier this year and willing plaudits on the film festival circuit.

Errementari: The Blacksmith and the Devil (Spain, 2017, not rated), a Faust-like folk tale set in Spain’s Basque country, makes is U.S. debut on Netflix.

True stories: Feminists: What Were They Thinking? (2018, not rated) revisits the history of the feminist movement through the inspiration of the pioneering activists and ReMastered: Who Shot the Sheriff (2018, not rated), the first episode in a non-fiction series, investigates the 1976 assassination attempt on the life of reggae icon Bob Marley in Jamaica.

Kid stuff: new seasons of the animated comedy The Boss Baby: Back in Business, adventure Tarzan and Jane, and pre-school fantasy Sofia the First.

A Prayer Before Dawn (2017, R) dramatizes the true story of a British boxer (played by Joe Cole) who survives a brutal Thailand prison by battling his way through Muay Thai tournaments.

Clint Eastwood became an international movie star in the iconic spaghetti western A Fistful of Dollars (1964). It’s back on Prime Video along with sequel For a Few Dollars More (1965), epic The Good, the Bad and the Ugly (1966), and American revenge western Hang ‘Em High (1968).

Foreign horrors: What We Become (Denmark, 2015, not rated, with subtitles) is a different take on the zombie drama.

True stories: The Quest of Alaine Ducasse (2017, not rated, with subtitles) profiles the famous French chef and restaurateur.

Kid stuff: a new season of the Disney series Miles from Tomorrowland: Season 3 is now available.

Jason Bateman and Rachel McAdams play a highly competitive couple who treat a kidnapping like an interactive game in the action comedy Game Night (2018, R).

The short documentary RX Early Detection: A Cancer Journey with Sandra Lee (2018, not rated) follows the TV host from diagnosis through treatment to recovery.

Pod Save America brings the political podcast to cable with a series of specials recorded in front of a live audience.

Flight of the Conchords: Live in London reunites the musical folk duo Jemaine Clement and Bret McKenzie for a live performance of music and comedy.

On Sunday night is the premiere of the HBO original series Camping, a comedy starring Jennifer Garner and David Tennant as a longtime married couple on a disastrous birthday weekend trip.

Jackie Chan takes a rare dramatic role in the thriller The Foreigner (2017, PG-13) as a widower who loses his daughter to a terrorist bombing in London and puts his unique set of skills (he was trained as a special ops soldier by the American military before emigrating to England) to work pressuring a former IRA officer (Pierce Brosnan) to give up the bombers.

Star of the Week Steve McQueen is featured in ten films, from his starring debut in The Blob (1958) to prison escape drama Papillon (1973, R) with Dustin Hoffman. Highlights include his starmaking hits The Magnificent Seven (1960) and The Great Escape (1963), where he shines through impressive ensemble casts, and Bullitt (1968, PG), which revved up movie car chase with trendsetting action and stunts.

Also new: the “Director of the Week: Mike Newell” collection includes romantic drama Enchanted April (1991, PG), romantic comedy Four Weddings and a Funeral (1994, R), and undercover thriller Donnie Brasco (1997, R) with Al Pacino and Johnny Depp, plus all three version of A Star is Born get the spotlight: the 1937 original with Fredric March and Janet Gaynor, the 1954 version with Judy Garland and James Mason, and the 1976 rock and roll revision with Barbra Streisand and Kris Kristofferson.