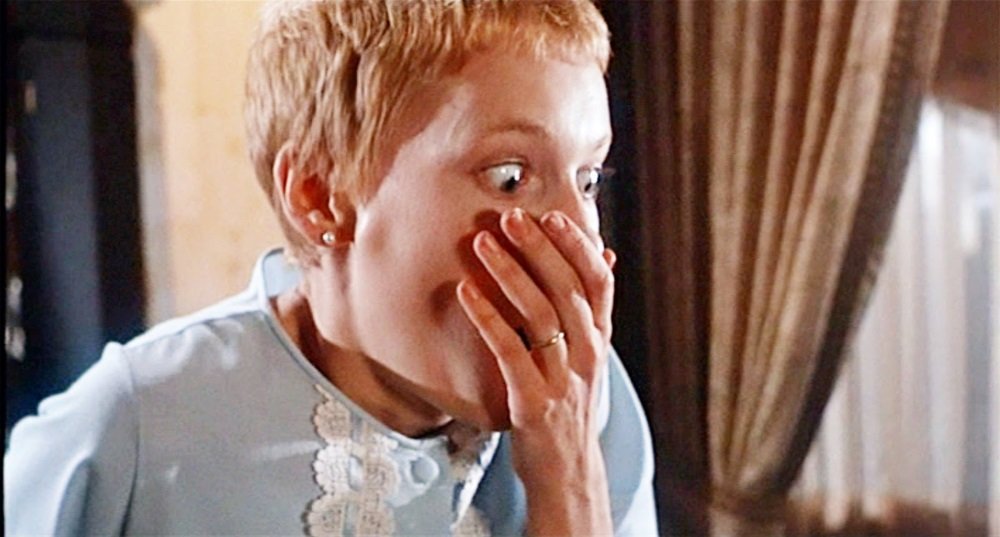 Rosemary’s Baby (1968), Roman Polanski’s American directing debut, is one of the most celebrated American horror films of all time, but horror isn’t really the right description for this film. Yes, it is about a cabal of devil worshippers in modern day (circa late 1960s) and an innocent served up to bear Satan’s child, but Polanski is less interested in terror and shock than in creating a mood of paranoia and instability.

He finds the eerie in the mundane, often just by unsettling viewers with images slightly out of off-balance or framing characters just outside of our vision, or by distorting the soundtrack in conversations, phone calls, or simply the muffled sounds from the other side of the wall. Polanksi also wrote the screenplay, faithfully adapting Ira Levin’s novel, and he proves to have a great ear for American dialogue that is at once banal, blackly comic, and intimidating.

Polanski’s casting and direction of actors is superb. Mia Farrow is frail and pixie-ish as Rosemary, deteriorating into a ghoulish pallor as her pregnancy progresses, while John Cassavetes becomes uncomfortably hectoring, dominating, and dismissive of her growing anxiety. Ruth Gordon earned an Oscar playinig a caricature of a nosy old lady with a curdled soul behind her motherly façade.

But for all the bleary, drug-smeared visions of the beast, the most terrifying monsters here are human. He finds the banal face of evil in the eccentric American gargoyles that populate the funky old apartment building (the real-life New York landmark The Dakota stood in for the exteriors), hiding their brutal conspiracy behind a mask of neighborly affection.

Polanski also earned an Oscar nomination for his adaptation of Ira Levin’s novel and it was added to the National Film Registry in 2014.

The Criterion Blu-ray and DVD release features the new 44-minute documentary “Remembering Rosemary’s Baby” with all-new interviews with director Roman Polanski, actress Mia Farrow, and producer Robert Evans, all of whom are forthcoming (though Evans speaks in clichés and self-promotional sound bites) about the creative process and the experience on the set, especially Farrow, who was making the leap to the big screen with a starring role.

Also features a radio interview with author Ira Levin from 1997, originally broadcast on New York-based “The Leonard Lopate Show,” and the documentary “Komeda, Komeda,” a portrait of jazz musician, composer, and Polanski collaborator Krzysztof Komeda (who died in 1969) made for Polish TV in 2012, and a booklet with a new essay by critic Ed Park and Levin’s afterword for the 2003 New American Library edition of his novel.