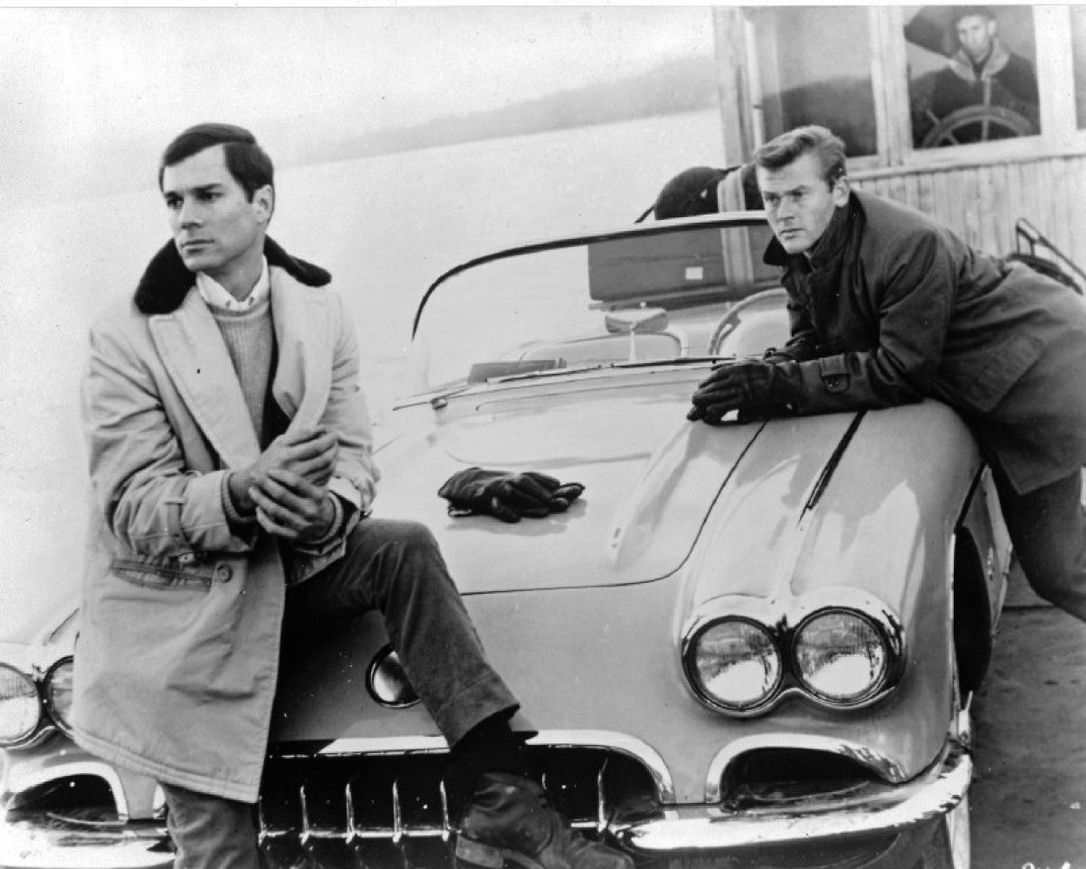 In Route 66: Complete Series (1960-1964), the original TV road show, Martin Milner is Tod the college boy, whose privileged life disappeared with his father’s bankruptcy and death and George Maharis is Buz the street wise ladykiller with a chip on his shoulder.

Boyhood friends, they hit the road in Tod’s sole possession, a Corvette convertible (“My father gave me that car, just before he died. It’s the only thing I’ve got left”), Buz riding shotgun as Tod drives too fast through a whole lot of shortcuts and into a lot of drama, all of it shot on location across the country. Every episode opens against the landscape of their new location with Nelson Riddle’s jazzy theme song providing the continuity.

It was kind of a Playhouse 90 on the road, with Tod and Buz—the naïve idealist and the rough and tumble pragmatist—as hosts and eternal guest stars as they traveled this great nation of ours looking for work. Created by writer Stirling Silliphant and producer Herbert B. Leonard (who both came from the similarly structured The Naked City), it was the best of its kind in its day, and its structure was picked up in such shows as The Fugitive with David Janssen.

Season One season works its way from the shadowy deep south (the series debut, “Black November,” takes them to a gothic town frozen in time by its own guilt and shame and ruled over by a virtual dictator, Everett Sloane) across the gulf coast through the southwest desert states and over to the west coast. Along the way they roustabout on an oil rig, defend a bitter Suzanne Pleshette from a murder charge, go logging in Oregon, work as ranchers, field hands, pickers, crop dusters, and more. Tod drives a stock car, Buz boxes, they both do plenty of romancing, but nothing beats Joey Heatherton doing a sex kitten dance on a bar in “Three Sides.”

Silliphant personally scripts more 75% of the first season, stamping the show with his brand of social drama and filling the dramas with troubled, tormented and just plain screwed-up souls looking for some peace. The shows don’t feel dated so much as dramatic time capsules – the language, the fashions, the details may change, but the characters are still dynamic and the scripts bring out the best of the guest cast, a mix of aging stars, stalwart characters actors, and up-and-coming performers: Janice Rule, E.G. Marshall, Leslie Nielsen, Jack Lord, Jack Warden, Lee Marvin, Patty McCormack, Sylvia Sidney, Walter Matthau, Dan Duryea, Robert Duvall, Darren McGavin and more.

You can watch the first episode for free from Shout! Factory on YouTube

In addition to a great cast of guest stars, the series was guided by some of the best directors working on TV, among them Philip Leacock and Arthur Hiller. The second season upped the ante, with episodes directed by Richard Donner (“A Bridge Across Five Days” with Nina Foch), Robert Altman (“Some of the People, Some of the Time” with Keenan Wynn), and Sam Peckinpah (“Mon Petit Chou” with Lee Marvin in his second appearance). Robert Duvall stands out as a drug addict trying to kick in “Birdcage on My Foot,” you can see a pre-Trek DeForest Kelley in “1800 Days to Justice” and pre-Law and Order Steven Hill in “City of Wheels,” and Robert Redford, Martin Balsam, Janice Rule, Ed Asner, James Caan, Martin Sheen, Ben Johnson, Tuesday Weld, Cloris Leachman, and Ralph Meeker appear in episodes.

The road is a little less linear in Season Three as the show seems to hop around the states more freely but the show continues to shoot on location all over the country. Buzz simply disappears without explanation about halfway through the season—George Maharis left the show—and Tod drives solo until he picks up Linc Case (Glenn Corbett), a Vietnam Vet looking for himself with on the road. The season features the lighthearted “Lizard’s Leg and Owlet’s Wing,” a comic piece starring horror icons Boris Karloff, Peter Lorre and Lon Chaney, Jr. playing themselves and donning the makeup of past characters, and “Journey to Nineveh” starring comedy legends Buster Keaton and Joe E. Brown, and Rod Steiger, Ed Asner, Leslie Nielson, Ron Howard, Theodore Bikel, Vera Miles, and Julie Newmar are among the other guest stars.

Season Four opens with Linc firmly established in the passenger seat. Corbett was never as dynamic or charismatic as Maharis but the chemistry improves by the final season as they settle into their friendship and Corbett offers something that had not been seen on TV at the time: the alienated war vet fighting PTSD (though it’s never called that) and struggling to find his place in the civilian world. The writing is just as strong through these final jaunts and the guest stars include Joan Crawford, William Shatner, and (in the two-part finale) Barbara Eden.

This remains one of my favorite shows. I became a fan when I stumbled across it in syndication while I was in my final year of college, and the wanderlust inspired me to take my own cross country road trip with my best friend. I didn’t have any adventures worthy of Route 66 but at least I drove a little of the classic highway.

116 episodes across four seasons, in black and white

Free on IMDbTV and Vudu (with ads) and on Hoopla, which is free (without ads) through most public and college library systems.

Also on DVD and on SVOD through Amazon Video, iTunes, GooglePlay, Fandango, Vudu and/or other services. Availability may vary by service.
Route 66: The Complete Series [DVD]

The box set from Shout! Factory includes the first three seasons previously released by Infinity Entertainment. Shout! Factory presents the same digital masters as the earlier releases for those seasons (including two episodes cut for syndication), with slightly improved quality for the fourth and final season. 116 episodes on 23 discs, plus a 24th disc with supplements, including a 1990 William S. Paley Television Festival panel featuring writer/producer Herbert B. Leonard, star George Maharis, episode directors Arthur Hiller and Elliot Silverstein, and casting director Marion Dougherty. Collected in four standard cases with hinged flaps in a box set. What it’s missing is an episode guide: an anthology show like this, with guest stars in every episode, really needs some kind of guide.